Czechoslovakia up and running through expected win

Having lost by a big margin at home to Switzerland a month earlier, there was little to suggest that Luxembourg would spring a surprise when taking on Czechoslovakia in Esch-sur-Alzette. The visitors had arrived after a string of impressive results, most recently a 4-2 home win against Austria the day before Luxembourg’s defeat against the Swiss. This would be the hosts’ third match of 1988 and their third at home. Having lost by three goal margins to both Italy (friendly late in April) and Switzerland, they had switched venue from the country’s capital to reigning domestic champions Jeunesse d’Esch’ home ground Stade de la Frontière. It was where they had shut out Scotland in the qualifiers for the 1988 European Championships. Could this mean a change in fortunes? Not that away ground seemed to worry the Czechoslovakians too much. Since the turn of the year they had won friendlies both in Málaga (2-1 v Spain) and in Copenhagen (1-0 v Denmark), as well as drawing 1-1 with France in Paris. Despite the French going through a lot of changes in player personnel, they are still a formidable opponent away from home.

Home boss Philipp knew he was unable to make wholesale changes, so he kept faith in ten of the players who had started against Switzerland, leaving out only right sided midfielder Girres. Big defender Scheuer came into the eleven, meaning Weis would move back into midfield after his disappointing showing as libero in the previous match.

In the visiting camp there will have been a lot of optimism before the kick-off of another World Cup qualifying campaign. Dr Vengloš, their manager, must have been pleased with what he had seen against the Austrians, despite the fact that they had let in two goals. The second had come in injury time. Striker Václav Daněk had only featured in the final 45 minutes, but had scored twice, and was pushing for a starting berth. So too will have been the case with Tomáš Skuhravý, but it had been expected that Dr Vengloš would keep faith with Milan Luhový as partner for first team regular Stanislav Griga. However, the manager sprung a surprise by selecting the Sparta Prague striker rather than Dukla’s Luhový, who had also been among the scorers against Austria. Furthermore, solid defender František Straka had switched over from Sparta to Borussia Mönchengladbach in the West German league, and so appeared to have made himself unpopular. Unavailable were also defectors Ivo Knoflíček and Luboš Kubík, of course. Against Luxembourg, though, Czechoslovakia would cope well even without them. It would be up to Kadlec to form the central defensive unit along with libero Chovanec, the same pairing which had also lined up against the Austrians. Full-backs were Bielik and Fieber, right and left respectively. Their four man midfield would contain players like Weiss, Němeček and Bílek, and possibly with Hašek performing the balancing act in the centre. No less than eight (!) of the visitors’ starters were from Sparta Praha.

Luxembourg had, not surprisingly, never beaten Czechoslovakia in five previous attempts. Referee was Yugoslavian Dušan Čolić, a 38 year old from the Serbian part of the confederation who would be making his bow in a World Cup match. His only previous international match as a referee had come a year and a half earlier, when he had been in charge of Turkey v Romania in Ankara. 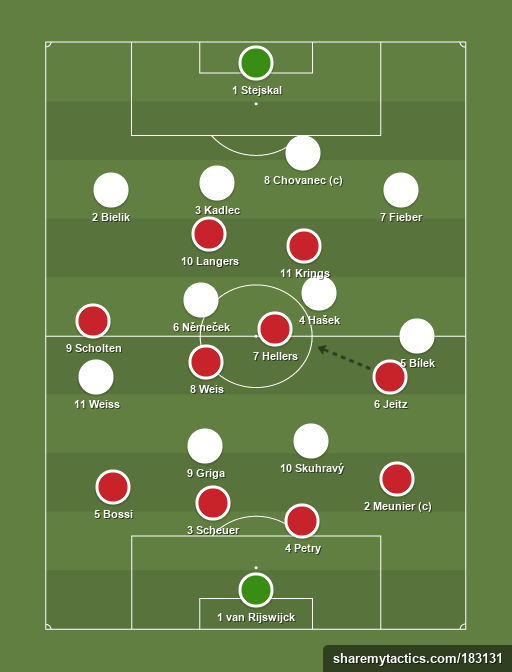 italia1990.com do wish to emphasize that this is merely a suggestion of how the teams could have lined their respective players up out on the pitch. We do not have access to any material from this particular match, so we are just making guess work based on our other experiences with both teams. We are well aware of the fact that even if these four same Luxembourg defenders often lined up together, they could vary according to positions, hence the possibility of Scheuer appearing at left-back or Bossi as a centre half, and not necessarily vice versa. Likelihood has it that Petry was regarded as their libero for this fixture. With star player Hellers in the team, it will have meant a more wide position for tireless worker Jeitz, and Krings will have been up front alongside the speedy Langers. Manager Philipp was a great fan of 4-4-2.

For the visitors, it does seem likely that they too came in a 4-4-2, with Bielik and Fieber occupying a full-back position each, and with Weiss and Bílek as the wide midfielders. Němeček looks to have kept Hašek company in the centre of the pitch, whilst captain Chovanec would have had a rather free role in the heart of the defence alongside Kadlec.

Again, please notice that this is just guess work.

Unfortunately, italia1990.com have been unable to find out much about this particular match, which has so far made it impossible for us to create a match report. Should we see a change in luck in the future, we will of course be back with as comprehensive a match report as we can provide. If you have any reliable information about this particular match, please do not hesitate to come forward.

There’s obviously the goals available via Youtube, and one can see how midfield ace Ivan Hašek strikes home diagonally and left-footed his second international goal on 26 minutes. Just ten minutes onwards, skipper Jozef Chovanec scores directly from a right wing corner with that efficient left foot of his. Chovanec, Hašek’s team mate at Sparta Prague, also registered his second goal for his country.

There had also been first half bookings for Luxembourg’s fine midfield man Guy Hellers and Czechoslovakia’s second goalscorer Chovanec.

After the break, both sides would use their maximum quota of two substitutes, with what looks like a direct swap when Patrick Morocutti replaces striker Armin Krings just after the hour mark for the home side, who also take off tireless midfield man Gérard Jeitz for Jean-Paul Girres with a few minutes remaining. In the away camp, wide midfielder Vladimír Weiss is replaced by forward Wiliam Hýravý on 76 minutes, while they take off striker Stanislav Griga four minutes later and bring on Václav Daněk for the final ten minutes.

Luxembourg, as must have been expected, were left with no points and a negative goal difference of five after the game, while Czechoslovakia must have been pleased to return back home with an expected points tally and a clean sheet.