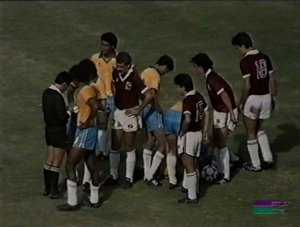 The group was identical with Group B of the 1987 Copa América, which Chile had won ahead of Brazil, actually beating the famous yellow and light blue by 4-0 on that occasion.

There was little doubt that Brazil were favourites, though. They were the only country to have reached each and every one of the 13 previous World Cups, and they would take something special by the Chileans to stop on this occasion, too. Still, it would be interesting to see how the Brazilians would look to shape ahead of their next tournament participation, as they were about to exit a decade which, World Cup-wise, had promised so much, yet delievered so little for that football-crazed nation. Their Copa América triumph on home soil would have brought about plenty of optimism and installed loads of confidence into the group of players which Sebastião Lazaroni had available to him.

Chile, on the other hand, had failed to get out of their group during the Copa, and they were probably a bit of an unknown quantity, despite the fact that they were still having the same manager which had overseen their two most recent continental championships: Orlando Aravena. Their second-place success in Argentina ’87 still lingered as a relatively fresh memory, even if some negativity would surely have replaced that following the most recent of events.

Venezuela would’ve harboured little hope other than giving their two opponents a scare or two during games. A point would be sensational. A couple of goals along the way was probably their most likely achievement. To avoid shipping a bucketload must also have been a target, though there had clearly been weaknesses in their defence during the Copa América. Could Carlos Moreno rectify this in time for the qualification?

In their unusual 3-4-3, Brazil fail to produce enough midfield power to make this a comfortable passage, although they will adjust during the half time break, a goal up thanks to Branco’s excellent low drive from distance, to seize a stronger grip on the proceedings in the second half. Venezuela, who had been composed and collected defensively first half, would show cracks and frailty in the second, and Brazil would ultimately rack up a convincing win, despite the goalkeeping heroics from Venezuela custodian Baena.

Chile do like Brazil and score early in the Venezuelan capital. The goal is the prelude to an entertaining game, where there’s plenty of goalmouth action. Aravena’s second strike is a world class free-kick. Hosts attempt a second half come-back, and are spirited until they get their goal through substitute Fernández. They had looked much improved in 4-3-3, having started the game in 5-3-2. Chile have a goalscoring substitute of their own, and Zamorano’s goal for 1-3 is the final of the game. They could have added more were it not for some big stops by Baena late on.

An action-packed tie ended with a goal apiece as both teams had players sent off in the opening quarter of an hour. The point is probably more valuable to Brazil than to Chile, with the latter now likely to need a win when going to Rio de Janeiro early next month. Ormeño should’ve walked when he brutally hacked Branco down, Romário saw red for punching Hisis, and then Ormeño followed suit few minutes later after a foul on Valdo. Brazil went in front after a weird own goal, but paid the price for sitting back trying to defend their lead. An inspired Chile drew level late on in controversial circumstances, as Basay hit home from close range after an indirect free-kick inside the six yard box. Bebeto unlucky to have goal disallowed with Brazil 1-0 up already.

“Goals galore!” That was on Brazil manager Lazaroni’s menu for the afternoon in São Paulo. And goals galore is what he got. They must have been pleased with both the amount and certainly also with the way they played, as they completely destroyed poor Venezuela. While four goals arrived in the first half, the hosts’ dominance was even greater after the break, when they created so many opportunities it was almost embarrassing how they didn’t score until Careca’s brace late on, taking his tally to four for the afternoon. Not a bad day at the office for Romário’s replacement, as the Netherlands based ace was suspended following the brawl in Chile last week.

Played across the Argentina border in Mendoza, ‘hosts’ Chile had been hoping to hit Venezuela for eight and thus overtake Brazil in the table. They had brought experienced striker Letelier into the team due to the fellow absence of Rubio and Zamorano, and the La Serena forward would finish with a hat-trick to his name. Venezuela displayed some first half aggression, and though left-back Cavallo should’ve walked for repeated offences, they ultimately escaped with ‘only’ four bookings. Visitors managed to keep the scoreline about as low as the Brazilians would’ve wanted, though the Chileans should have added to their tally towards the end of a late rampant second half spell. Midfielder Vera the great architect behind their performance.

This was the ultimate decider, and your arch-typical ‘winner takes all’ match. Chile were in need of a win; Brazil would go through with a draw. Their previous meeting, the 1-1 draw in Santiago, had been a juicy affair which had produced two red cards and a host of yellows. The home side went on to dominate this game, which had far less sinister spirit about it. Against a Chile which had altered into a more defensive formation for the occasion, they produced several efforts at goal in the first half, but found Brazil based ‘keeper Rojas impenetrable. Careca then notched in the fifth minute of the second half, upon which Chile had their best spell of the game, without seriously asking questions. Ultimately, it all turned sour when Rojas seemed to have been hit by a firecracker thrown from the stands. Play was halted on 69 minutes, and the Chilean team carried their distraught custodian off, never to reappear. A week later, FIFA would award Brazil a 2-0 win.

So it was ultimately Brazil who won through to progress for yet another World Cup particpation. Naturally, they remained the only nation in the world to have competed in each and every tournament, with Italia ’90 the 14th since the inaugural championships in Uruguay in 1930.

The final group standings hardly came as a surprise to anyone, given the quality in depth that the Brazilians had available to them. However, they were given a couple of scares along the way by the Chileans. Both countries despatched of the lowly Venezuelans home and away, though Brazil gained a stronger goal difference with an aggregate 10-0 to Chile’s 8-1.

The key game for the group’s second seeds had been the home fixture against Brazil in Santiago. This turned out to be a major battle, and a total of ten cards were issued during the course of the game, with the two early reds, to Romário and Ormeño respectively, the ‘highlights’. Brazil rarely looked like conceding, and once ahead, one fancied them to go on and win. They even had what seemed like a perfectly good second goal chalked off, and only some quick thinking by Aravena and substitute Basay late on rewarded the spirited Chileans with the equalizer.

While a draw sufficed for Brazil going into the final fixture, the home game against the Chileans, the visitors needed a win in order to upset the odds and progress through to the World Cup proper. Alas, the game will forever be remembered for all the wrong reasons, as goalkeeper Rojas, in the middle of a ‘Man of the Match’ performance, went down and feigned injury after a member of the crowd had thrown a firecracker onto the pitch and in the Chilean captain’s vicinity. The act had been found out and picked apart within a week, and the forfeited game, with Brazil a goal up at the time, was ultimately awarded as a 2-0 win for the Brazilians under the existing rules for a team abandoning the field of play before full time.

Careca, Brazil’s dynamic striker, finished as the group’s top goalscorer, and even claimed our website’s prestigeous prize of  top group spot based on average player ratings. He had come into the qualification on the back of an injury, but grew in confidence and performances as the group progressed.

Venezuela, as had been expected, propped up the table, and had to make do with a solitary goal across their four matches. They were rewarded with some truly inspired goalkeeping performances from Baena, though other than that they were fairly ordinary throughout.