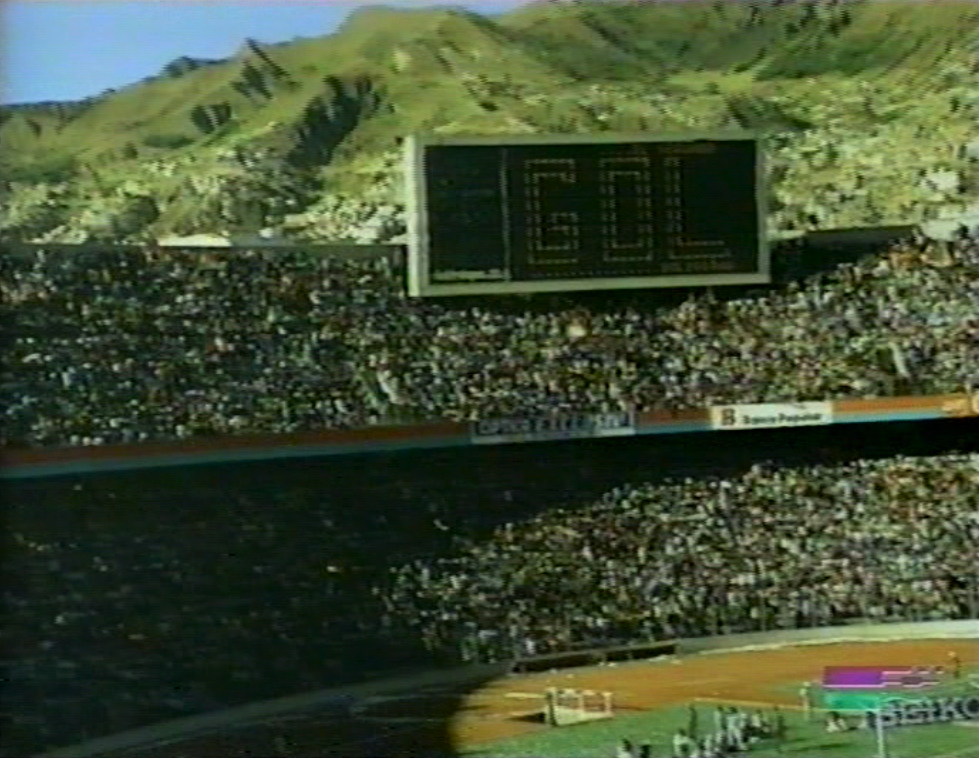 As could be said about Group 3, there was also a relatively clear favourite beforehand in Group 1 of the CONMEBOL section: Uruguay. Neither Bolivia nor Peru were expected to have the capacity to challenge eight times World Cup participants, who had indeed even won the Jules Rimet trophy twice: In the inaugural tournament on home soil in 1930, as well as the famously claimed victory in the Maracanã in 1950, when they had silenced the alledged crowd of around 200,000 people through notching the winning goal.

Peru was of course another nation with a World Cup pedigree, though there were obviously few players left with experience from such occasions. They had participated three times out of four from 1970 to 1982, but especially in the wake of the horrific aircrash disaster which had struck their highly promising Alianza Lima club side in December 1987, they now looked a relatively bleak side. There appeared to be more promise among the Bolivian ranks, even if they had failed to do much in the recently held Copa América tournament.

Uruguay had appointed former Peñarol manager Oscar Tabárez in 1988, after he had led his club side to the continental title, defeating América de Cali of Colombia over an eventual three matches. He had succeeded Roberto Fleitas, who again was Omar Borrás’ successor, the man who had led them in the 1986 World Cup, where they had arrived with a reputation of being a niggly outfit, a reputation which they had certainly lived up to. They had won the 1987 edition of Copa América, having qualified directly for the semi-finals stage as holders, and even looked strong in the recently held continental championships, where they had only lost out on another title to Brazil in the final match of the second group stage.

Bolivia were under the tutelage of Argentinian coach Jorge Habegger, an exciting coach who had enjoyed success at domestic level in the country in leading La Paz club Bolívar to successive titles in 1987 and 1988. In the Copa América tournament, they had failed to evoke much passion, even exiting without a single goal to their name over the four group stage games, though at least they had held reigning world champions Argentina to a scoreless draw in their final fixture. There were some exciting up and coming players, but they also had several players the ‘wrong’ side of 30. Could Habegger find the right balance to make them challengers, and could they take advantage of playing their home matches in the high altitude of the capital?

Peru also had a relatively newly acquired coach in Brazilian former national team winger Pepe, or José Macia, as was his birthname. This was his first ever international assignment, even if he had managed for 14 years. ‘Pepe’ had not ignited them in time for the Copa América, where they, like Bolivia, had failed to win a single game, although they had drawn three times, and even managed to hold Brazil to an early 0-0 result. It did look difficult for them with the current crop of players, which did not really contain much above the ordinary. The new boss would have to work magic in order to produce results in this qualification.

The opening match in Group 1 ended with a deserved home win, as Bolivia were the better side for the majority of the game. Playing in the La Paz altitude provided the visitors with some challenges which they never really came to terms with, and the hosts had the individuals to put the Peruvians to the sword. Melgar and Romero bossed the midfield, while visiting ‘keeper Purizaga needed to deal with several efforts from distance. He even saved Pérez’ first half penalty, until conceding an equalizer on the stroke of half time from what was Bolivia’s second spot-kick of the afternoon. This after they themselves had snatched an unlikely lead through a fine volley from midfielder del Solar. Ramallo’s excellently taken goal early in the second half secured both points for the hosts, who had introduced teenager Sánchez to some effect for the start of the final 45 minutes.

Two second half goals ensured Uruguay’s qualification campaign got under way with a favourite win, even if they allowed the hosts to enjoy the majority of possession. Peru were certainly not overawed: not by the occasion, and not by the opponents. They fought gallantly, but didn’t quite have the physicality to match the visitors. Uruguay’s pace on the break proved vital, and Alzamendi assisted Sosa for the first and then netted the second himself. It was a game with plenty of commitment, but with relatively few goalscoring opportunity. Del Solar led from his libero position on Uribe’s return to the national side, while Gutiérrez and Paz were the pick of the visiting bunch.

Massive test for the Uruguayans in the Bolivian altitude, and one which they would ultimately fail. The credit should definitely go to the hosts, though, who put on a very fine performance, and they richly deserved their win. Perhaps were they unfortunate that it hadn’t come with a greater margin. Habegger’s tactics with overpowering the visitors in central areas, as well as making excellent use of their tireless wide players, saw to that the visitors were stretched. Uruguay had been fortunate to be handed their goal back on a plate following an unlucky back pass by an under-pressure Romero. Peña the big home hero with his signature on both goals, although the opener went down as an own goal.

The visitors took a massive step in the direction of World Cup qualification through their third successive win. They were second best for most of the game, though, with Peru giving their best display of these qualifiers. They came out in a 4-3-3, often attacking through left-back Olivares, and the liveliness of Hirano and strength of Gonzáles saw them cause Bolivia problems. However, Habegger once again got his tactics right eventually, and in their compact 5-4-1, they fended the hosts off, and completed their ‘smash and grab’ when substitute Sánchez scored the winner with just over ten minutes left for play. Montaño had put them in front in first half injury time, and then an excellently executed Peruvian transition had seen them equalize. Drama just after Sánchez’ goal, when Trucco stopped centre-back Requena’s penalty. A total of six bookings in a game which was never ugly. Peru had deserved at least a point.

The penultimate game of the group would go a long way to deciding which team would reach Italia ’90: A home win would effectively see the Uruguayans through, as they were facing lowly Peru on home soil in their final qualifier. Bolivia, whose performance had not been great in Peru, but yet got them a win, only needed a point in order to defy the odds and qualify. Alas, the fairytale was not to be. Uruguay dominated for almost the entire 90 minutes. They scored twice, were probably robbed for two penalties, and the second half saw two Bolivian players, substitute Sánchez and libero Fontana, sent off. The party-clad near capacity crowd got what they had come for. It could not have been more deserved.

A Uruguay team without captain Francescoli and the suspended Perdomo were looking to secure their passage through to Italia ’90. Any margin of victory would see them overtake Bolivia at the table summit. The Peruvians had got rid of manager José Macia, and it was his assistant Percy Rojas who had been tasked with this their final qualifier. In a first half which came to life beyond the 25 minute mark, Peru midfielder Reynoso was sent of for a retaliating punch on Bengoechea’s face. Having created some fine goalscoring opportunities, it was that man Sosa on target again in first half injury time. After the break, ten man Peru should’ve levelled the game when Hirano rounded the ‘keeper, but hit the outside of the post. Shortly after, Sosa notched his and Uruguay’s second. They saw the game out in controlled fashion, and were qualified for the World Cup.

Uruguay left it until the final qualifier before they finally secured their passage through to Italia ’90, just like it had been expected of them beforehand. Defensively they were sound throughout, but losing in the La Paz altitude had set them back a major step. Bolivia were feeding on the energy which they got from their two early home wins, and the Peruvians turned out to be nothing more than also-rans.

In the wake of their miserable Copa América campaign, few would have left Bolivia much chance of upsetting the odds in this qualifying group. They did set the tone early, however, and their schedule had probably been kind to them, providing them with two home fixtures from the off. While the win against Peru had hardly been an upset, even up in the mountainside would they probably not have been given fair odds to defeat Uruguay. They’d deserved what they got, though.

Uruguay got their campaign off to a fine start with the win in Lima, which had arrived in a relatively cautious manner. They had let the hosts come at them, and with the quality they could boast up front, they’d stung the Peruvians on the counter. There was skill and elegance (Paz/Francescoli), blistering pace (Alzamendi/Sosa), and not least goalthreat (Sosa), and they were mostly allowed to reserve their energy for going forward, as the other six members of the side were defending so capably. At least against opponents like these two.

Another key game came in round 4, when Bolivia even showed their ability to win on foreign soil. Despite having their backs against the wall for spells in Lima, they managed to squeeze both points away from their Peruvian hosts, and the exciting 19 year old that was Erwin Sánchez had hit the winner. He would feature in each of their four matches, whilst another highly promising fledgling, Marco Etcheverry, remained an unused substitite for their entire qualification.

Uruguay, having played their two away matches, returned home to Montevideo for the group’s two final games, knowing that they’d need to win both in order to qualify. Despite trailing Bolivia with four points prior to those two ties, they were probably still favourites to advance in most people’s eyes. And against opponents who both made sure to have players sent off, they earned their successive 2-0 victories through quality.

It is worth noticing how ace forward Rubén Sosa finished the qualification on five goals, which equalled the tally of Brazil striker Careca. While the latter had struck four times in the 6-0 rout against Venezuela, Sosa’s numbers had been accumulated via a goal in each and every one of their qualifiers, and even two in the final game. It was certainly no mean feat.