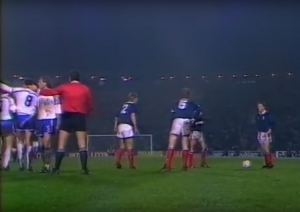 Group 5 saw five teams of which neither had participated during the 1988 European Championships. At first sight, the group could perhaps seem to be relatively unimaginative, as the top seeds, France, were no longer of the same quality that they had been earlier in the decade. Scotland (2nd) were still there or thereabouts towards the end of most qualification campaigns, though they had left a bit to be desired last time around. Yugoslavia (3rd), winners of the 1987 youth World Cup, appeared to have exciting things going for them, whereas Norway (4th) and, certainly, Cyprus (5th), were considered little other than also-rans. Read more . . .

Match 1: Norway 1-2 Scotland
14 September 1988, Ullevaal Stadion (Oslo)
Scotland open their campaign with a fine away win following goals from McStay and Johnston, although there's a few hairy moments, particularly in the first half, when Norway had been posing a threat, predominantly through right-sided midfielder Løken. Fjørtoft had tied the game up on the stroke of half-time, but a change in midfield formation at half-time saw the Scottish appear for the second half in a diamond which suited them well. The Norwegians were highly unfortunate to lose midfielder Sundby immediately, and they struggled physically against strong Scots.

Match 2: France 1-0 Norway
28 September 1988, Parc des Princes (Paris)
Looking to win a point after their home reverse two weeks earlier, Norway arrived in Paris with defensive tactics. This saw France lead the way for much of the game, even if it took them until the second half to test Thorstvedt. They should've been in front through the lively Xuereb, and then it took a tremendous parry from Bats after Osvold's point blank range header to keep the scores level until the late French siege arrived. Having introduced striker Paille for midfielder Passi, Henri Michel's decision to go 4-2-4 late on paid off: Paille won in the air against Bratseth, something which in turn saw Bravo win a penalty from Giske for Papin to strike home the only goal. Deserved win, although the performance had hardly been convincing.

Match 3: Scotland 1-1 Yugoslavia
19 October 1988, Hampden Park (Glasgow)
The pair play out a score draw with plenty of quality on display, even if there's not a whole lot happening in terms of goalmouth action. The game is a fierce contest throughout, and both sets of players are fully committed. The hosts move in front after their first left hand side initiative all game, and later the visitors strike back when the home side are unable to defend a near post corner. The second half sees Scotland make use of the wind, as some huge goalkicks spell trouble for the Yugoslavia rear guard. Apart from a McCoist effort which is excellently saved by Ivković, the Balkan visitors manage to stay resilient. Good game in which a point each is just about the right outcome.

Match 4: Cyprus 1-1 France
22 October 1988, Makáreio Stádio (Nicosia)
Cyprus get their qualification under way with a seriously shocking point. They face their opponents in a deep 5-3-2 and on a hard, uneven pitch, but they defend well throughout, even if they are rarely stretched by an unimaginative French side, which only had themselves to thank for this pitiful outcome. France had little pace and no one individual which accepted enough responsibility to grab hold of the fixture, and so their nonchalant performance in the end probably got what it deserved: a sole, shameful point. Credit to the part-timers, who created next to nothing in an attacking capacity, but still found a late equalizer after a cleverly worked free-kick had rewarded them with a penalty.

Match 5: Cyprus 0-3 Norway
2 November 1988, Tsíreio Stádio (Limassol)
We have no footage from the game. However, a Norwegian newspaper report claims that Cyprus had begun the game really well, pinning the visitors back inside their own half, and Norway would have big goalkeeper Erik Thorstvedt to thank for some crucial first half interventions. With no goals to show for their superiority, Cyprus' efforts would soon turn to despair, and having fenced off some quite Cypriot pressure, Norway themselves eventually came good as they moved in front in the second half. In fact, two goals from striker Gøran Sørloth turned the game the visitors' way, and they'd add a third in the dying moments to add insult to injury. Cyprus had lost influental defender Khristodoulou in the first half.

Match 6: Yugoslavia 3-2 France
19 November 1988, Stadion JNA (Belgrade)
France lead 2-1 until 15 minutes remain in Platini's first match, having executed a good game plan away from home in a 4-3-3 spearheaded by an excellent Paille. The home side were the best side overall, though, and the international comeback of Safet Susic proved a success. It was not until Savicevic was introduced as a sub that Yugoslavia managed to find the two decisive goals, however, as the team started to lose shape in the 2nd half.

Match 7: Yugoslavia 4-0 Cyprus
11 December 1988, Stadion Crvena Zvezda (Belgrade)
Buoyed by the fine come-back win against France the previous month, Yugoslavia tear into the lowly visitors, and they strike the ball around confidently and put visiting 'keeper Giorgos Pantziaras to the test on several occasions. Young striker Dejan Savićević notches two identical goals inside 32 minutes, experienced libero Faruk Hadžibegić converts a late first half penalty after spirited midfielder Safet Sušić had been felled by Andreas Papakostas. The 3-0 half-time scoreline was probably even kind to the visitors, who showed no attacking ambition throughout. In the second half it was a stop-start affair, and Yugoslavia came to life for a few minutes after the 75 minute mark, with Savićević heaping more misery on the visitors as he completed his hat-trick with a right-foot finish. Cyprus had five players booked.

Match 8: Cyprus 2-3 Scotland
8 February 1989, Tsíreio Stádio (Limassol)
This turned out to be just about as dramatic as it gets, with Scotland netting their winner deep, deep into injury time from Gough's header. It was played on a difficult pitch, and although the visitors went ahead early, Cyprus would peg their visitors back and indeed be a goal up themselves early in the second half. They're a tricky proposition at home, especially on a bumpy pitch like this and with more than 20 000 behind them, but they would eventually construct their own demise as they begun a high level game of time-wasting towards the latter stages. Scotland had got back to 2-2 not long after Ioannou's goal, though a point was still a tremendous return for the lowly hosts, whose hearts were broken in the 96th minute through Gough's header from Aitken's free-kick. The defender was perhaps an unlikely hero, but he was the sole player with the most goal attempts throughout (six). Scotland equal Yugoslavia's points tally at the top of the table.

Match 9: Scotland 2-0 France
8 March 1989, Hampden Park (Glasgow)
Two contrasting approaches, as Platini wishes to play through the middle and Roxburgh instructs his men to play direct passes to McCoist and Johnston. Both were successful, but Scotland are on top from the start and got the important first goal. The tireless McCoist and Johnston instrumental in everything Scotland do, and Johnston score two goals bringing his total to five so far in the qualification.

Match 10: Scotland 2-1 Cyprus
26 April 1989, Hampden Park (Glasgow)
Direct and aggressive hosts take the two points in a game which they dominated, although they had to see Cyprus peg them back after Johnston's opener, which was his sixth goal in the ongoing qualification. The Scottish were with a debutant at centre-half in Hearts' Dave MacPherson, while Cyprus had elected to leave out veteran 'keeper Giorgos Pantziaras, replacing him with Andreas Kharitou. Just a minute after midfielder Floros Nikolaou's deft equalizer, McCoist slotted home from McStay's angled pass for the winning goal.

Match 11: France 0-0 Yugoslavia
29 April 1989, Parc des Princes (Paris)
France seriously struggling in the 1st half to provide support for their three forwards, with their midfield effectively canceled out by a compact Yugoslavian side. They were abysmal, however, after changing to 4-4-2 in the 2nd half. Yugoslavia had a sound balance between safety and calculated risks, and almost nicked it through one of their many counter attacks in the 2nd half against a high French defensive line.

Match 12: Norway 3-1 Cyprus
21 May 1989, Ullevaal Stadion (Oslo)
To still have an interest in the qualification, Norway needed to beat Cyprus, and on home soil, having won 3-0 away, they'd have been expected to beat them comprehensively. They were aided by an own goal to open the scoring, and then saw two excellent individual goals from Sørloth and Bratseth respectively. Do not be fooled, though: This was nowhere near a vintage performance. The Cypriots got a goal back with just about their only effort on target, and in a poor quality game, the hosts did just about achieve their goal ahead of next month's visit from Yugoslavia.