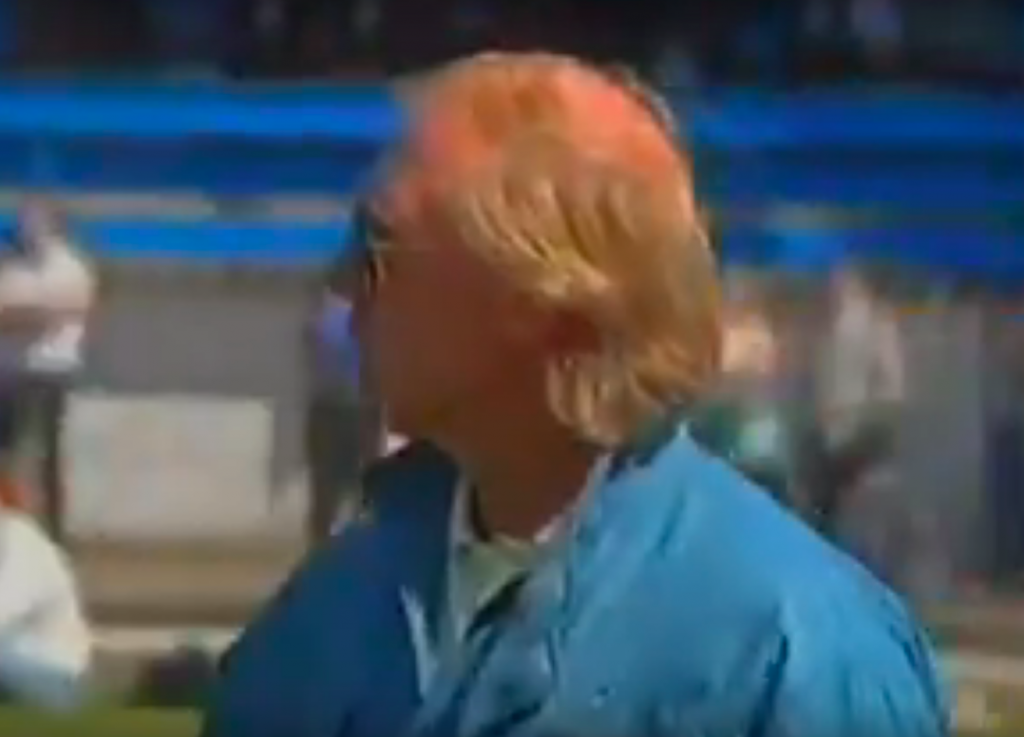 Malta could have few hopes of qualifying for the 1990 World Cup from Group 6, and had naturally been ranked 5th in the seeding. But they usually manage to hold off a draw or two in these qualification rounds. In the 1988 Euro qualifiers, they had drawn against Portugal (a) and Switzerland (h). In the 1986 World Cup qualifiers, they had drawn against Czechoslovakia (h). They could obviously cause trouble for teams dependent on points in an even group. It was therefore likely that they would create some upset also this time.

Horst Heese was newly appointed coach of the Maltese national team. His most prominent position as a manager had hitherto been the job at Nürnberg (1980-81). He had been last seen managing in Viktoria Aschaffenburg (December 1986). Read more…

Qualifier 1: Northern Ireland 3-0 Malta
21.05.1988
Line-up (5-3-2): Cluett – Brincat, E Camilleri (Micallef h-t), Buttigieg (c), Galea, Azzopardi – Scerri, Scicluna, Degiorgio (Caruana 60) – Carabott, Busuttil
Malta eventually went down to a scoreline, but Busuttil had wasted a glorious chance to give them the lead early on, and then Buttigieg hit the bar with a free-kick after the first home goal. Malta conceded twice more before half time, and were struggling without influential midfielder Ray Vella (inj.).

Friendly: Malta 2-3 Wales
01.06.1988
Goals: Busuttil 2
Line-up: Cluett – Brincat (Scicluna 75), E Camilleri, Buttigieg (c), Galea, Azzopardi – Carabott (Refalo 59), Scerri, Micallef (Lowell 37), Degiorgio – Busuttil.
Malta’s third consecutive match against one of the home countries, and forward Busuttil continued his good run by scoring both of Malta’s goals. Goalkeeper Cluett was however faulted in national media for conceding some sloppy goals, raising questions if Heese should continue keeping faith in the Floriana goalkeeper. There were a couple of debuts for Malta, with Leo Refalo and Emanuel Lowell appearing during the second half.

Friendly: Malta 1-1 Cyprus
23.11.1988
Goal: Carabott
Line-up: Cluett – Brincat, Scicluna (Woods), Buttigieg (c), Galea, Azzopardi – Scerri (S Vella), Gregory, Degiorgio – Carabott, Suda (Saliba)
Scicluna featured in all three friendlies, but would never again put on the national team jersey. Busuttil, who else, got the winner in Cyprus, a game in which Heese had sent out an experienced eleven, where only right sided midfielder Brincat had not yet reached double cap figures. The defeat in Israel saw debuts for young ‘keeper Cini, defender/midfielder Silvio Vella and midfielder Suda, whereas Carabott’s goal against adversaries Cyprus, this time in the ‘return leg’ at home, was his first ever at international level. Saliba made his debut in this one

Friendly: Malta 1-2 Israel
11.01.1989
Goal: Carabott
Line-up: Cluett – S Camilleri (Ciantar 75), E Camilleri (Gregory 23), Galea, Azzopardi – Scerri (S Vella 64), R Vella (c), Degiorgio, Carabott – Busuttil, Suda
Another goal for young Carabott to follow up that which he recently got against Cyprus. His goal had been the equalizer, but Israel would go on to win it in the second half. Midfielder Suda got his international debut

Qualifier 4: Spain 4-0 Malta
23.03.1989
Line-up: Cluett – E Camilleri, Buttigieg, Galea, Azzopardi (Cauchi 31) – Scerri, R Vella (c), Gregory, Degiorgio – Busuttil, Carabott
It eventually became comfortable for Spain as Malta had had Degiorgio sent off just before half time with a soft second yellow. Heese had taken off the woeful Azzopardi after just half an hour after he had been unable to follow the man-marking instructions down his side.

Qualifier 5: Hungary 1-1 Malta
12.04.1989
Goal: Busuttil
Line-up: Cluett – Cauchi, Galea, Buttigieg, E Camilleri, Azzopardi – Scerri, R Vella (c), Gregory (S Vella h-t) – Carabott, Busuttil
Strong wind contributed to ruining the quality of the game, but Malta deserved their point so much. Time and again the visitors were given the opportunity to counter-attack. A lack of quality in the final ball denied them the chance to win it in the second half. Malta finally saw a solid right-back display: Cauchi had done well. Was he the answer to Heese’s problems in this position?

Qualifier 6: Malta 0-2 Northern Ireland
26.04.1989
Line-up: Cluett – Galea, Buttigieg, E Camilleri – Cauchi (S Vella 72), Scerri, Gregory, R Vella (c), Degiorgio – Carabott (Delia 78), Busuttil
A lack of creativity made sure Malta were left with nil, and they also gave away two rather sloppy goals which could be blamed on a lack of concentration. It was back to the drawing table for Heese after the excellent point in Budapest.

Qualifier 7: Republic of Ireland 2-0 Malta
28.05.1989
Line-up: Cluett – S Vella, Buttigieg, Galea, Azzopardi (Carabott 66) – Scerri, Gregory, R Vella (c), E Camilleri, Degiorgio – Busuttil.
It was an expected outcome as Malta never threatened the home side, and it was quite possibly Malta’s most negative performance during the qualifiers. S Vella had been equipped with the difficult task of looking after giant striker Cascarino, and E Camilleri had been placed in a defensive midfield position. Heese had not picked a designated right back.

Friendly: Cyprus 0-0 Malta
11.10.1989
Line-up: Cini – S Vella, Galea, Delia, Carabott – Scerri, R Vella (c), Degiorgio – Suda (Zerafa), Busuttil, Zarb.
Only the third time out of a total of 13 internationals in the calendar year of 1989 that Malta did not lose: Cini was again in goal, Suda in midfield, and Zarb had started up front.

Qualifier 8: Malta 0-2 Republic of Ireland
15.11.1989
Line-up: Cini – S Vella, Buttigieg (c), Galea – Scerri, Zerafa (Zarb 69), Gregory, Degiorgio, Azzopardi (Suda 69) – Carabott, Busuttil
There was no Maltese answer to the Irish intent of making qualification certain. The absence of suspended captain R Vella was felt, and due to another suspension, that of goalkeeper Cluett, Cini made his qualification debut and did well.

Two draws have to be counted as acceptable for Malta. Crucially both of them came against Hungary. Malta’s top player in this campaign was Carmel Busuttil, who experienced an international breakthrough.

Those who had been following the Maltese qualifying campaign close up, would have noticed some quite remarkable player developments along the way. Goalkeeper David Cluett had given a bit of an indifferent impression in the opener in Belfast, but he grew steadily throughout the campaign, and although he had been suspended for the final match at home to the Irish, he had proved his worth between the sticks. And even young Cini who had taken over the gloves for the match against the Republic had done reasonably well. There appeared to be little to fear for years to come regarding the goalkeeper’s position.

Defence: In the centre, both Buttigieg (the free man) and Galea had played every single minute of the ’90 qualifiers. Older brother Camilleri, Edwin, also seemed to be a preferred starter under Heese, and Azzopardi at left back likewise. Malta’s problem appeared to be in the right back position, where both young Brincat and younger Camilleri brother Silvio had been given the opportunity to impress without quite taking it. Cauchi had been another option, and even E Camilleri (Spain away) got playing time here. The real con deal was to perform in Dublin without a recognized right back. It seemed to confuse the Irish, as Sheedy down their left hand flank never managed to utlize the space that he had ahead of him.

Midfield: Having missed the opening tie in Belfast through injury, R Vella came in and steadied ship from the Hungary home game and onwards, until he missed the final game at home to Ireland through suspension. The captain’s calm head was always a source of comfort to Malta, even when sea was rough. Around him Charlie Scerri grew into a decent player at international level. Having started off the campaign in a central capacity, he seemed more at home when he was able to use his positional sense and awareness down the right hand side. Martin Gregory had, like Ray Vella, missed out on the opening tie in Northern Ireland, but would be starting every one of the seven following matches. He could perform in a host of roles, and was perhaps the single player in the Maltese team to have the most attempts at goal during the qualifiers without finding the net (in fact, only Busuttil ever did). Young David Carabott, originally a striker, was also deployed in a wide midfield role on several occasions, and most definitely also grew during the year and a half that the Maltese campaign lasted. In a left-sided role, there was also the reliable Michael Degiorgio, by now the most experienced player in the Malta national team squad, winning his 57th cap against the Irish at home. Silvio Vella did not often appear in the centre of the pitch, but when he did, he looked more at home here than he did when having to play in a man-marking role in defence. Then again, judging him on the background of his two appearances of looking after man mountain T Cascarino was probably unfair.

Attack: With his three goals in eight matches, Carmel Busuttil, the third Malta player in addition to Buttigieg and Galea to feature in every minute of the qualifiers, received most of the international acklaim that came in the Malta players’ direction. He was also their only foreign legionnaire in a European top flight league, plying his trade with Genk in the Belgian first division. He had only notched three goals during their relegation season of 1988/89, but had been featuring regularly. He would help Genk win back their place in the first division after one year on the second tier. With his low centre of gravity and smartness in moving, he could sometimes be difficult to pick up for the opposition’s defenders, and he seemed to enjoy playing with Scerri on the wide right, like was seen during their 1-1 in Hungary. Mainly, he would have young David Carabott next to him in attack, and even Martin Gregory was seen as a striker in the home game against Spain.

Malta had never embarassed themselves, and could look ahead with optimism for the qualifiers for the 1992 European Championships. Hopefully, still with Horst Heese in charge.

Explanation to table: Number of rated games: 8. A player must have obtained a rating in half or more of the games in order to feature