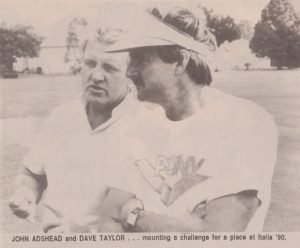 46 year old John Adshead had returned to the New Zealand managerial post in time for the start of the World Cup qualification. He had succeeded Kevin Fallon (incidentally, father of footballer Rory Fallon), who had handed in his resignation less than two weeks earlier. Adshead was obviously famous in these parts for having taken the All Whites to their first ever World Cup participation back in 1982, when they’d overcome a gruelling 15 matches qualification campaign to reach the tournament in Spain. The new man in the seat was doubling up with managing at club level, where he was in charge of (Auckland club!) Mount Wellington, one of the country’s leading sides. He was seen as a big character and very charismatic.

It should be noted that nothing had been said about the length of Adshead’s contract. Around this time, there are newspaper reports suggesting that his return was just temporary, as they’re cautiously and perhaps rhetorically asking “(…) whether Adshead remains in charge of affairs or not come March.”

Adshead’s assistant was 38 year old Dave Taylor, a former national team player, who held the record of being New Zealand’s youngest ever international when he turned out in a tie against South Vietnam back in 1967. He was also considered one of the best players the country had ever produced, and had featured in World Cup qualification campaigns both for ’70, ’74 and ’78.

While results towards the end of Fallon’s tenure had failed to impress, most notably that three-fold of matches in Fiji a month prior to the start of the World Cup qualification, there were also reports that he had been very discontent with the players’ daily allowance from the New Zealand FA. This could well have played part in Kevin Fallon’s resignation.

Some critics were pointing out that football in New Zealand was heading nowhere. There appeared to be a limited level of professionalism from the higher echelons in the game, and enthusiasm around the national team had appeared to wane. The unique results in the 1982 World Cup qualification, which ultimately brought about participation in Spain, had raised the bar, and they were a hard act to follow. Could the return of the highly popular Adshead spark a revival in interest around the All Whites team?

Preceding the qualification group stage was a double-header against Chinese Taipei, a team which New Zealand had come up against earlier in the year, when they had beaten them 1-0 and 2-0 in qualification for the Seoul Olympic Games back in March. Those games had been played in Australia and New Zealand respectively. Despite those disappointing results towards the end of Kevin Fallon’s time in charge, the All Whites were expected to advance to the group stage of the World Cup qualification.

Second leg: New Zealand 4-1 Chinese Taipei
15.12.1988, Western Springs (Auckland)
Goals: Wright, McClennan 3
Line-up (4-3-3): Gosling – Herbert (c), Lund, Jennison (Dunford 60), Ridenton – Levy, Rufer, W., Halligan – Barkley , McClennan, Wright (Debenham 60)
Played out in front of around 9,000 fans, New Zealand had added big star Wynton Rufer to the side, and from a central midfield position the Switzerland based ace directed traffic. However, striker Darren McClennan made a big claim for the headlines with his hat-trick. Simple passage through to the group stage for the Kiwis.