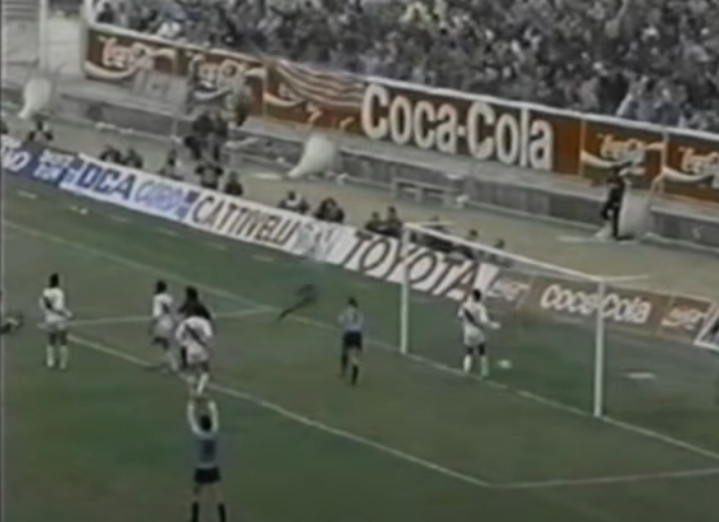 The CONMEBOL zone had 9 entries for the 1990 World Cup qualification: Bolivia, Brazil, Chile, Colombia, Ecuador, Paraguay, Peru, Uruguay, Venezuela. In addition, Argentina were to represent the region in Italia’90 as the reigning world champions.

The draw was held in Zürich 12 December 1987. The 9 teams were drawn in three groups of three teams each, giving a total of 18 matches across the groups which were scheduled to take place between 30 July and 24 September 1989 (kicking off considerably later than the other continental zones in the 1990 World Cup qualification).

South America’s continental tournament Copa América, by now held biannually, though only since the 1987 issue, had been played out in Brazil between 1 July and 16 July. The hosts had ultimately won, avenging the bitter defeat against Uruguay from the final round during the 1950 World Cup on home soil in an identical format to then. The 1989 edition of Copa América was in many ways a prelude to the ensuing World Cup qualification.

The Brazilians would be opening the qualification just two weeks after winning the South American championships.

Group 3, match 1, Estadio Brígido Iriarte (Caracas)
Venezuela 0-4 Brazil
They put up a fine first half fight, the plucky hosts, but a goal down at the interval, they will lose their shape in the final 45, and the four goal cushion is well deserved for the recent Copa América champions.

Group 3, match 2, Estadio Brígido Iriarte (Caracas)
Venezuela 1-3 Chile
Another early goal conceded for the hosts, just like last week, and despite being on top for the first 22-23 minutes of the second half, they ultimately deserved a second successive loss. Chile’s quality shone through in the end.

Group 3, match 3, Estadio Nacional (Santiago)
Chile 1-1 Brazil
Two early incidents lead to a red card for each team. In the wake of this, plenty of shots are fired from distance, without reward. Brazil move in front after crazy own goal, whilst the late equalizer is another bizarre incident in a game far from free of controversy.

Group 1, match 1, Estadio Hernando Siles (La Paz)
Bolivia 2-1 Peru
Bolivia saw one spot-kick saved and another converted, and Peru had gone in front from a fine finish late in the first half. The hosts were by far the better in midfield, bossing the majority of the game, and look to have a real gem in second half substitute teenager Sánchez. They deservedly turned the game around.

Group 2, match 1, Estadio Metropolitano (Barranquilla)
Colombia 2-0 Ecuador
A superior Colombia saw off the threat from their neighbours Ecuador without too much trouble. Iguarán scored twice in the air, of which the first was a world class finish.

Group 3, match 4, Estádio do Morumbi (São Paolo)
Brazil 6-0 Venezuela
An expected rout, and indeed the score was kept down by the fine goalkeeping of César Baena. Careca celebrated his return to the side by scoring four times, two in each half.

Group 1, match 2, Estadio Nacional (Lima)
Peru 0-2 Uruguay
Uruguay sat back and invited the hosts to dominate possession, and then they caught them on the break with some efficiency, scoring twice in the second half to claim a well-deserved win.

Group 2, match 2, Estadio Defensores del Chaco (Asunción)
Paraguay 2-1 Colombia
A solid performance by the hosts, though they needed an injury time penalty conversion from debutant ‘keeper Chilavert to see off Colombia, whose ten men had equalised after Álvarez’ sending-off.

Group 3, match 5, Estadio Malvinas Argentinas (Mendoza, Argentina)
Chile 5-0 Venezuela
On neutral ground in Argentina, Chile couldn’t quite rack up the scoreline necessary to surpass Brazil in the group standings, albeit they gave it a decent go. Letelier took the main plaudits through his hat-trick, but a late onslaught failed to yield a sufficient number of goals against an, at times, aggressive opponent.

Group 1, match 3, Estadio Hernando Siles (La Paz)
Bolivia 2-1 Uruguay
Uruguay’s quick transitions became a non-theme in the Bolivian altitude, and the hosts made sure to grab the plaudits which their game plan warranted. This was Álvaro Peña’s big moment.

Group 2, match 3, Estadio Monumental Isidro Romero Carbo (Guayaquil)
Ecuador 0-0 Colombia
Goalless, perhaps, but an increasingly action-packed game as it went along, with both teams having had opportunities to seal the win. Both had even started out in 4-4-2, but came off having switched to 4-3-3 in search of that elusive winner.