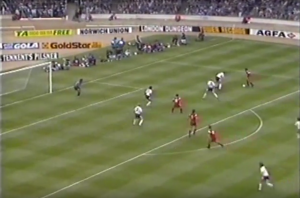 Despite their failure at the European Championships, no one would probably look beyond England for qualifying from Group 2, although they would face some stiff competition from both Sweden, who had performed well during the qualifiers for Euro '88, and Poland, who despite having had to replace another very good generation of footballers, were looking to make amends for a relatively indifferent qualification showing last time around. Poland had reached each of the last four World Cups, so there was nothing wrong with their recent history. And Albania? Well, generally understood as a very isolated country of which little is known throughout Western Europe, they had never even been close to ever qualifying for a major tournament. Surely it would be no different this time around.

Match 2
19 October 1988, Stadion Śląski (Chorzów)
Poland 1-0 Albania
Win could and should have been by a greater margin as Poland were dominant.

Match 4
8 March 1989, Stadiumi Qemal Stafa (Tirana)
Albania 0-2 England
England do what is expected of them and not so much more.

Match 6
7 May 1989, Råsunda (Stockholm)
Sweden 2-1 Poland
Sweden struggle to break down Poland, but are victorious thanks to set-pieces.

Match 7
3 June 1989, Wembley Stadium (London)
England 3-0 Poland
England dominate and win again, and have yet to concede. Poland's campaign all but over.

Match 8
6 September 1989, Råsunda (Stockholm)
Sweden 0-0 England
England marginally the better side as both 'keepers make saves to keep the opposition out. A second scoreless draw between these two see them both edge closer towards qualification.

Match 9
8 October 1989, Råsunda (Stockholm)
Sweden 3-1 Albania
The home side have too much nous for an Albanian team with little to play for. They seem untroubled even after going behind.

Match 10
11 October 1989, Stadion Śląski (Chorzów)
Poland 0-0 England
Poland well on top during an all-action first half, but England close the space in an uneventful second. The visitors qualify for the World Cup, Poland are out.

Match 11
25 October 1989, Stadion Śląski (Chorzów)
Poland 0-2 Sweden
Understandably lacklustre Polish performance under the circumstances, and a thoroughly professional job by the Swedish to make their qualification certain with a well-taken win.

Match 12
15 November, Stadiumi Qemal Stafa (Tirana)
Albania 1-2 Poland
No live footage available from this fixture, apart from goal highlights. Hence, we have nothing to base a match report on.

Even if it had upset the bookmakers, it should not have come as a giant surprise that Sweden pipped England for the top berth. They had done well in their previous qualifiers, and brought the confidence that they had gained from that qualifying tournament into this. They gained a very creditable draw in London in the group opener, and this set them on their way to pole position, first and foremost thanks to an unreal individual performance by centre half Hysén. Sweden dealt swiftly with both Albania and Poland, and gained maximum points from these four matches, something which their main group rival could not copy. Despite a couple of friendly set-backs during the summer of '89, Sweden could clinch the top spot with an impressive 2-0 win in Chorzów late in October.

England did not want to miss out on World Cup qualification, something which would see them participate for a third successive time, but they had to be content with a scoreless draw in their home opener against what was deemed to be their main rival in the fight for the group's top spot. They boasted some of international football's strongest attacking names in Lineker, Beardsley, Barnes and Waddle, but somehow manager Bobby Robson struggled to make them shine together. Half of their ten goals came in the home game against rock bottom Albania, another three as they had wiped Poland off the Wembley turf, whilst they had to rely on ageing goalkeeper Shilton for their key 0-0 in Poland, a result which definitely kept the Polish out of the reckoning. It must be said that not conceding during six qualifiers was a fine achievement, even if there had been times when they had come close to breaching that statistics.

Poland's campaign had been an odd one. They had looked alright when winning against Albania in their opener, albeit only by a single goal, but successive away defeats in Sweden and in England saw the Polish FA decide to relieve manager Łazarek of his duties and replace him with the experienced Strejlau. He brought optimism along with him, but as they could not get that elusive win in their home tie with England in the autumn, their campaign was in practice over, and they were then deservedly beaten at home by the Swedish in a lacklustre performance. The change in manager also brought along a switch in personnel, as a good few players only played the first three matches under the previous manager, with a few new ones coming to the fore under Strejlau. The final win in Albania was just academic. Polish football could not make a fifth successive World Cup entry.

Little had been expected of Albania other than them giving a decent account of themselves in their three matches on home soil. And it has to be said that they did, even if they lost all three, as well as their three expected away defeats. They had managed to keep the score down in their opening tie in Poland, and had gone ahead in their subsequent match at home to Sweden. However, two quick Swedish second half goals brought an end to their resistance, and shortly after successive defeats home and away to England followed. There were some decent individual campaigns, most notably by sweeper Hodja, but goalkeeper Mersini, central defender Lekbello and midfielder Demollari also came away from the qualification with their integrity very much intact, and then striker Kushta had come in for the final two matches and notched a goal in each of them. Their failed attempt to gain at least a point from six qualification matches brought an end to manager Rreli's second national team tenure.