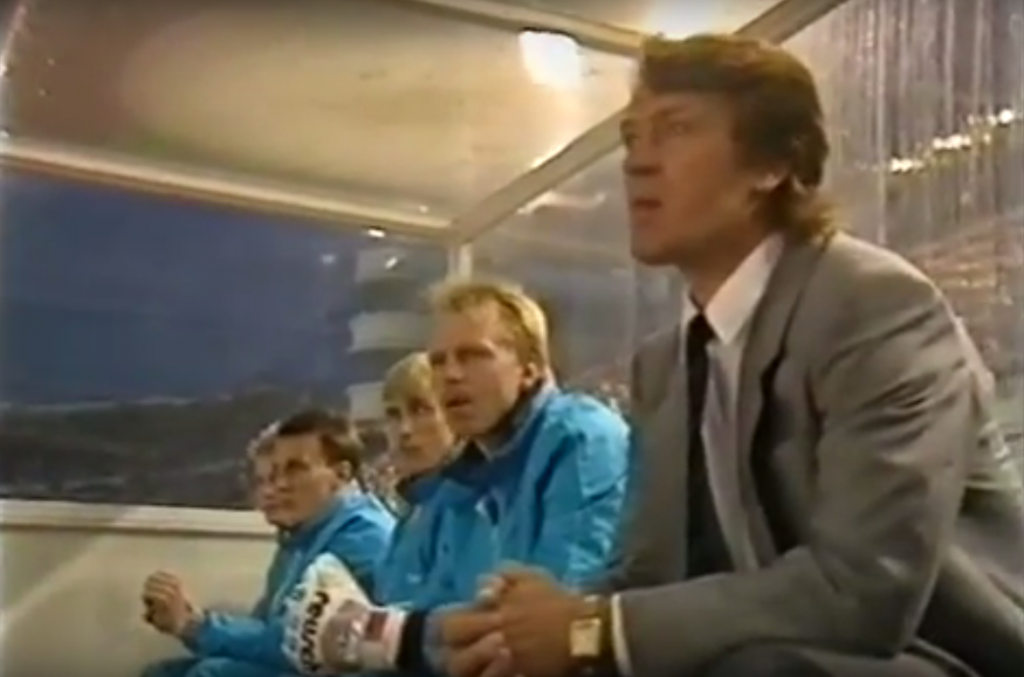 Not much reason for the Finns to be cheerful and gay after being drawn into UEFA qualification group 4, as they would be up against some of the powerhouses of international football.

Manager Jukka Vakkila, 38 years of age by the start of the qualification, had taken over from Martti Kuusela, whose last task had been seeing to Finland finishing their qualification campaign for the 1988 European Championships. Vakkila had until then been in charge of the Finnish Olympic team, who had finished bottom of their qualification group for the 1988 Seoul Olympics. He was a well educated coach, having taken his badges at the famous Sporthochschule in Köln. Despite all his learning, taking his team to Italia’90 was excepted to be well beyond a realistic target for Finland in competition with the Netherlands, West Germany and Wales. Read more…

Qualifier 1: Finland 0-4 West Germany
31.08.1988, Olympiastadion (Helsinki)
Line-up (4-4-2): Laukkanen – Hännikäinen (Lipponen 44), Lahtinen, Europaeus, Petäjä – Myyry, Pekonen (c), Ukkonen (Alatensiö 63), Hjelm – Rantanen, Paatelainen.
Unused subs:
Attacking-looking line-up by Vakkila, and they are completely ran over. The match is over within 15 minutes. As one could fear, they looked very slow in comparison to the swift Germans. The long-ball tactics was a failure, as nobody was there to pick up the knock-downs. In particular Ukkonen was disappointing, and it would in hindsight have been better to field the in-form Alatensiö.

Qualifier 2: Wales 2-2 Finland
19.10.1988, Vetch Field (Swansea)
Goals: Ukkonen, Paatelainen
Line-up (4-4-2): Huttunen – Pekonen (c), Lahtinen, Europaeus, Kanerva – Myyry (Lipponen 86), Holmgren, Ukkonen, Petäjä (Rantanen 60) – Paatelainen, Hjelm
A strong point by a much improved Finland, where midfield enforcer Holmgren made sure to lift the quality in the centre of the pitch since last time around. Some fine individual performances from the centre-backs and Paatelainen as well, and the point was well deserved as Finland even saw Huttunen save Saunders’ second half penalty.

Qualifier 3: Finland 0-1 Netherlands
31.05.1989, Olympiastadion (Helsinki)
Line-up (4-4-2): Laukkanen – Holmgren, Europaeus (c), Heikkinen, Kanerva – Myyry, Ikäläinen, Ukkonen (Törnvall 68′), Hjelm (Petäjä 83′) – Lipponen, Paatelainen.
Subs: Huttunen, Lius, Lahtinen.
Finland try to hang on to a draw, but lose in the final minutes. With Lahtinen out of the team, there’s less focus on long balls, but the attempts to use the speed of Lipponen is a failure. Finland struggle to cross the midway line at times, and playmaker Ukkonen still need too much time on the ball. Decents impressions by new centre-half Heikkinen and the returned Ikäläinen.

Friendly: Finland 2-2 Yugoslavia
23.08.1989, Väinölänniemen Stadion (Kuopio)
Goals: Spasić (own goal), Ukkonen
Line-up (4-5-1): Huttunen – Holmgren, Europaeus (c), Heikkinen, Lahtinen – Myyry, Törnvall, Ikäläinen, Ukkonen, Tarkkio (Järvinen 84) – Lipponen (Lius 84)
Vakkila had allowed himself to experiment for this friendly against a second string Yugoslavian team, which still contained plenty of talent. Finland went in front during the opening minute, as Tarkkio’s cross came off Spasić and went in, though they’d be pegged back pretty quickly. In a rare 4-5-1 formation, with Anderlecht star Kari Ukkonen operating at the helm of the midfield, it was him who struck for 2-1 before the half hour. Ultimately, Finland would be unable to keep the Yugoslavs out, as they’d succumb to a second equalizer early in the second period.

Qualifier 4: Finland 1-0 Wales
06.09.1989, Olympiastadion (Helsinki)
Goal: Lipponen
Line-up (4-4-2): Laukkanen – Holmgren, Europaeus (c), Heikkinen, Lahtinen – Myyry, Ikäläinen, Ukkonen (Tauriainen 83), Tarkkio – Lipponen, Paatelainen (Törnvall 65)
It is a windy afternoon in the Finnish capital as Lipponen makes sure of a home win through his headed goal from the impressive Ukkonen’s corner early after the restart. Finland play with great zest and are uncompromising throughout, unsettling and frustrating their opponents. Tarkkio makes impressive first appearance of the qualifiers.

Qualifier 5: West Germany 6-1 Finland
04.10.1989, Westfalenstadion (Dortmund)
Goal: Lipponen
Line-up (4-4-2): Laukkanen – Holmgren, Europaeus (c), Heikkinen, Lahtinen – Myyry, Ikäläinen (Hjelm 71), Ukkonen, Tarkkio – Lipponen, Paatelainen (Lius 63)
Decent first half where the Finns kept their shape, and Ukkonen scored from a direct free-kick midway through the half, only to have it ruled out for offside against a team mate. When the hosts scored their second goal just after the restart, the Finns simply had no answer to the pace with which West Germany attacked. They owed to Laukkanen to keep the score down, and there was a huge gulf in class between the two sides.

Qualifier 6: Netherlands 3-0 Finland
15.11.1989
Line-up (4-4-2): Laukkanen – Holmgren, Europaeus (c), Heikkinen, Kanerva – Myyry, Ikäläinen, Tarkkio (Petäjä 76), Ukkonen (Tauriainen 57) – Paatelainen, Lipponen
The Finns came into the game with little to lose, but were rarely experimental other than switching positions for Ukkonen and Tarkkio, and they were also very reluctant in moving forward, trying to protect what they had from the outset. There were some hairy first half moments, especially as Kanerva struggled to keep control of van’t Schip. Laukkanen made some fine stops. In the second half, once the first goal went in, there was never a way back for Finland. They did manage to avoid finishing bottom of the group, though, which must be seen as something of a success.

Having been fourth ranked, Finland must have seen it as a success to have avoided that bottom position. They did loose heavily on three occasions, whilst they had come close to snatching a very surprising point at home to the Netherlands, only to see their good work undone from Wim Kieft’s late header. Three from four possible points against Wales was a fine achievement, especially having lost heavily to them away from home in the previous qualification.

The Finns were playing 4-4-2 throughout the qualification, and they had some big, imposing players. Technically, they were not top rank, but they did have some players capable of doing the unexpected. However, one which had probably failed to deliever, was Belgium based midfield ace Kari Ukkonen, who started all six of their qualifiers, but who failed to live up to his billing. The broad-shouldered ‘Mixu’ Paatelainen up top had carried a lot of responsibility, whilst full-back/defensive midfielder Erik Holmgren had stood out as their most consistent performer from start to finish.

Finland manager Jukka Vakkila would’ve taken great pride in the two matches against the Welsh, and coming from a goal down to secure a draw in Swansea had been a particularly strong achievement, despite the fact that they rode their luck in the second half, and had goalkeeper Olavi Huttunen to thank for saving Dean Saunders’ penalty (the striker had converted one during the first half). The home win had come after a couple of uplifting friendly results, where the Finns had kept East Germany to a 1-1 draw away before holding a decent Yugoslav outfit to 2-2 at home in August.

No less than nine players started four or more of their six qualifiers. 22 players were in use altogether, so it was not as if Vakkila had swapped and changed a whole lot during the tournament. In addition to the mentioned Holmgren and Paatelainen, goalkeeper Kari Laukkanen also left a sound impression from his five participations.

Explanation to table: Total number of rated games: 6. A player needs to have been rated in half or more of the games in order to appear on the list.