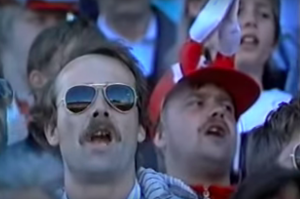 During the 1980s, the Danish team had become a household participant at the international stage with three major tournaments in a row (1984, 1986, 1988). Could they live up to their favourite tag in qualification Group 1 for the 1990 FIFA World Cup?

Sepp Piontek was still manager (since 1979), but a new national team was taking shape in the aftermath of the 1988 Euros where they crashed out with zero points in the group stage. Stalwarts Morten Olsen, Søren Lerby, Søren Busk and Preben Elkjær had since retired from the national team. This meant that the backbone of the much favoured team from the 1986 World Cup now was gone. The outlook of the new Danish team could in fact be spotted in the lineup in their last match in the group stage of the 1988 Euros, with players like Peter Schmeichel and Lars Olsen. The home public was also aware of the big changes, and this group of players was touted as the “new” national team. Read more…

Qualifier 1: Greece 1-1 Denmark
19.10.1988:
Goal: Povlsen
Line-up (4-4-2): Schmeichel – Sivebæk, K Nielsen, L Olsen (c), Heintze – Bartram (Kristensen h-t), Helt, Jensen, M Laudrup – Povlsen, Brylle (Elstrup 78)
1-1 in Athens was a decent start for the Danes, as the Greeks proved to be a good home side in this qualification. Denmark were trailing 1-0 at h-t, before Piontek switched from 4-4-2 to 3-5-2 (Kristensen in, Bartram out) and Povlsen found the leveller. The latter formation was to be the one most in use by the Danish for the rest of the qualification.

During the Malta tournament, Piontek took the opportunity to try out some new players: No less than four debutants were among the 13 who featured against the host nation, one of them Liverpool player Jan Mølby’s cousin Johnny, the Vejle midfielder. None of the four would feature later in the qualifiers for ’90. Piontek had also picked Brøndby’s exciting teenager Brian Laudrup, younger brother of super star Michael Laudrup, for the Danish squad, but despite Lars Elstrup and Henrik Larsen’s goals against Malta, Denmark finished the tournament as runners-up to Algeria. In the squad had been two Bent Christensens and two Johnny Hansens.

Friendly: Italy 1-0 Denmark
22.02.1989, Stadio Arena Garibaldi (Pisa)
Line-up (3-5-2): Schmeichel – J Larsen (B Kristensen 79), L Olsen (c), K Nielsen – Vilfort (Helt 77), J Jensen (H Larsen 71), Ja. Mølby, Bartram, Heintze – Povlsen, B Laudrup
Piontek fielded a much stronger side than in Malta, though against an opponent of clearly more advanced nature, they found it difficult to make much in terms of inroads against the Italian defence. Michael Laudrup was missing, and the two forwards were well contained by the host defence. Jan Mølby got the opportunity to stake a claim for a place in the side, but he did not impress. Schmeichel and man-markers did well, but Denmark fell to a deserved defeat.

Friendly: Denmark 2-0 Canada
12.04.1989
Goals: Elstrup, own goal
Line-up: Rasmussen (Schmeichel h-t) – J Larsen, L Olsen (c), K Nielsen (H Larsen 52) – Moseby (Vilfort h-t), Bartram (Helt 80), J Jensen, M Laudrup, B Laudrup (Strudal 75) – Povlsen, Elstrup
The match saw a goal from Elstrup and an own goal by a visiting player. Canada might have seemed a bit of an odd opponent, as their status in the international footballing world was pretty much that of fledglings. They proceeded to play twice against minnows Faroe Islands on the same tour. Piontek had picked a very strong team in order to prepare for the upcoming trip to Sofia, and only goalkeeper Rasmussen and midfielder Moseby were not deemed regulars among the starting bunch.

Qualifier 3: Bulgaria 0-2 Denmark
26.04.1989
Goals: Povlsen, B Laudrup
Line-up (3-5-2): Schmeichel – J Larsen, L Olsen, K Nielsen – Sivebæk, J Jensen (Helt 86), M Olsen (c) (Vilfort 75), Bartram, Heintze – Povlsen, B Laudrup
Morten Olsen was re-called to the team and Brian Laudrup made his qualifier debut. They were vital in this match which set Denmark back on track for a place in the World Cup.

Friendly: Denmark 1-1 England
07.06.1989
Goal: Elstrup
Line-up: Schmeichel – I Nielsen (J Larsen 67), L Olsen (c), K Nielsen – Risom, M Laudrup, Helt, Bartram, H Andersen (Vilfort 62) – Elstrup, B Laudrup (P. Rasmussen 86)
Denmark came into this friendly in good form, but they were up against an England that had finally started to show some promise. The visitors would go ahead through Lineker in the first half, but that man Elstrup brought the hosts level not long after the restart. Vejle midfielder Risom made his debut, after he had already been on the bench in the away match in Bulgaria. Ivan Nielsen played in his first international for a year. Both Laudrup brothers were also present.

Friendly: Netherlands 2-2 Denmark
06.09.1989
Goals: Bartram (pen.), Heintze
Line-up: Schmeichel – I Nielsen, L Olsen (c), K Nielsen – Sivebæk, M Laudrup, Helt, Bartram, Heintze – Povlsen (Frimann 75), B Laudrup
Piontek fields a full strength team this time, and the team comes back from 2-0 down to rescue a draw. Goals by Bartram and Heintze. Helt looks to be back in the team after being replaced by M. Olsen during spring.

Qualifier 6: Romania 3-1 Denmark (report 1), Romania 3-1 Denmark (report 2)
15.11.1989
Goal: Povlsen
Line-up (5-3-2): Schmeichel – Sivebæk (Elstrup 73), I Nielsen, L Olsen (c), K Nielsen, Bartram – M Laudrup, J Jensen, Lerby – Povlsen, B Laudrup
Denmark do move in front early as Povlsen converts, his fifth goal in this qualification, following B Laudrup’s sensational run, but then they’re more or less outplayed through to half-time, and they’re fortunate just to be a goal down. There’s a third Romanian strike on the hour, though when Hagi gets sent off a minute later, you do sense there’s an opportunity for the visitors to get themselves back into it. However, a push never materialises, and it is a thoroughly deserved passage through to the World Cup for the hosts, as Denmark are eliminated.

The Danes stage an impressive comeback, but it proves too late. On the basis of their form in 1989, they were probably the better team in the group. A good result in Sofia was followed by very impressive performances against Greece and Romania. The comeback of Morten Olsen and the emerging talent of Brian Laudrup inspired Piontek’s team to find their shape. With the win over Romania in Copenhagen, they were even controlling the group before the final match in Bucharest. The decider could have gone both ways, but in the end Romania were triumphant.

Looking back, it was their form during autumn 1988 that proved costly. In particular the home draw against Bulgaria was disappointing, and there was also a sense of resignation after this result in the Danish media. There had been a lot of excitement, but also uncertainty, over the Danish team that took shape after the disappointing 1988 Euros, and the meager tally after two games convinced the home public that Piontek still had a lot to work on. The Danes did, however, return a lot stronger in 1989, but again, they had to rue the lost point against Bulgaria in Copenhagen.

All in all it is impossible to claim that Denmark deserved a World Cup berth more than Romania, who did put down some great performances themselves. The generation of Popescu, Hagi and Sabău at times excited us with attacking football of high standad. But on the other hand: if the Danes had won the decider in Bucharest (which they very well could have done), few could have had any complaints either.

Despite failing to qualify, this was not a squad without talent. The core of team that failed in the 1990 World Cup campaign would go on to win the 1992 Euros three years later: Schmeichel, Lars Olsen, Kent Nielsen, Sivebæk, Jensen, Povlsen, and Brian Laudrup.