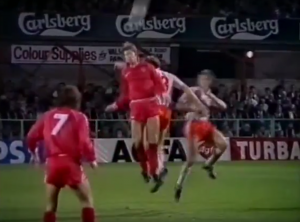 In Wales, Terry Yorath had recently taken up the manager’s role after a long reign by his predecessor Mike England, who had failed to guide the British country to either of Spain ’82, France ’84, Mexico ’86 or West Germany ’88. After four failed attempts at qualifying for a major international tournament, though no qualification tournament under Mike England had ever left them more than two points away from actual qualification, the Welsh FA will have felt the need for a change. Yorath started his first job at international level on a part-time basis, as he was still managing Swansea, one of four Welsh clubs participating in the English Football League, whom he had taken from the fourth to the third division, winning the 1987/88 play-offs. A rather eccentric character, his biography “Hard man, hard knocks” (2004) will surely be an interesting read. Yorath’s assistant was Peter Shreeves, whose acquaintance Yorath had made whilst they were both at Tottenham around 1979/80: Yorath as player, Shreeves as reserve team manager. Read more . . .

Qualifier 1: Netherlands 1–0 Wales
14.09.1988
Olympisch Stadion, Amsterdam
Line-up (4-4-2): Southall – Hall, Nicholas, Knill, Blackmore – Williams, Horne, Davies, Aizlewood – Hughes (Saunders 78), Rush (c).
In his first competitive match in charge, Yorath opted for a defensive approach, something which was hardly surprising given the nature of the opposition. The Welsh rode their luck at times, and saw a number of fine stops from their excellent ‘keeper Southall, but had to admit defeat after a late goal.

Qualifier 2: Wales 2–2 Finland
19.10.1988
Vetch Field, Swansea
Goals: Saunders (pen.), Lahtinen (own goal)
Line-up (4-4-2): Southall – Hall (Bowen 58), Van Den Hauwe, Ratcliffe (c), Blackmore – Saunders, Nicholas, Horne, Pascoe – Rush, Hughes.
For the home fixture against Finland, Yorath chose a much more attack-minded eleven, with Saunders and Pascoe down the flanks. Some sloppiness at the back saw the visitors draw level in first half injury time, after a penalty and an own goal, after a wonderful move, had put Wales in front. Saunders missed a second half penalty which had erringly been awarded to him by the poor Icelandic official. Disappointing for the Welsh not to beat an opponent they would need maximum points from to stand a chance of challenging for second spot. Effectively game over already as far as qualifying went.

Friendly: Wales 0–2 Sweden
26.04.1989
Line-up: Southall – Nicholas (Aizlewood 67), Ratcliffe (c), Van Den Hauwe – Phillips, Horne, Williams, Bowen – Saunders, Rush, Hughes
This is most likely Yorath’s first attempt at 3-4-3 with Wales, with Nicholas at the heart of the defence alongside Van Den Hauwe and Ratcliffe, allowing for Saunders to join the front line, and with Phillips and Bowen as wing backs. Williams would be in central midfield alongside Horne.

Qualifier 3: Wales 0–0 West Germany
31.05.1989
Arms Park, Cardiff
Line-up (3-4-3): Southall – Nicholas, Ratcliffe (c), Aizlewood – Blackmore (Bowen 81), Horne, Williams (Pascoe 81), Phillips – Saunders, Rush, Hughes
Wales give their all, but are ultimately content to settle for a draw against mighty opposition. Horne has a very eventful game in the middle of the park, and the visitors find it difficult to live with his tenacity. The same man’s lucky not to be sent off or even booked for a wild two-footed lunge on Reinhardt early in the second half. Wales also owed some debt to Southall for keeping out a second half Häßler effort from distance, whereas Rush came within a whisker of breaching the deadlock right on half time.

Qualifier 4: Finland 1-0 Wales
06.09.1989, Olympiastadion (Helsinki)
Line-up (3-4-3): Southall – Aizlewood, Ratcliffe (c), Nicholas (Maguire 89) – Blackmore, Williams (Bowen 81), Davies, Phillips – Saunders, Rush, Hughes
Wales seemed somewhat reluctant to accept the battle, and were bullied by physical opponents. The alledged ‘world class’ forward three never had much of a say, and they were desperately poor in central midfield. The wide players were also unable to offer much support, and the game was decided from an early second half corner kick. The Welsh are officially out of contention for the World Cup.

Qualifier 5: Wales 1-2 Netherlands
11.10.1989, Racecourse Ground (Wrexham)
Goal: Bowen.
Line-up (3-4-3): Southall (c) – Hopkins, Nicholas, Maguire – Blackmore, Phillips, Williams (Pascoe 84′), Bowen – Saunders, Roberts (Jones 63′), Allen.
Wales were without some of their best names, and lose to a largely superior Netherlands. Yorath continued with his 3-4-3 despite the absence of Rush and Hughes, showing his confidence in the system. The three front men were expected to do most on their own, and Saunders and Allen did carve out a few chances that they should have buried if they were to get a result here. Horne and Ratcliffe were perhaps more notable absentees on the field than Rush and Hughes.

Qualifier 6: West Germany 2-1 Wales
15.11.1989, Müngersdorfer Stadion (Cologne)
Goal: Allen.
Line-up (3-4-3): Southall – Maguire, Melville (Pascoe 80′), Aizlewood – Phillips, Blackmore, Nicholas, Bowen (Horne 65′) – Saunders, Allen, Hughes.
Wales shock the eventual World Cup winners by taking the lead in this qualification decider, but are deservedly beaten in the end. Predictably a defensive strategy trying to break forward with their front trio, who especially in the first half created much problem to their mighty opponent. But they looked vulnerable to crosses all evening, and once again let in a set piece goal.

The Italia ’90 qualification had been a disappointment to Wales. They had finished bottom of their pool and won none of their six matches, indeed losing their final three. All four defeats were by a single goal margin, so it is not as if they were being torn apart. They would also surrender their proud home record of not having lost a home qualifier in the 80s, as the Netherlands won 2-1 in Wrexham. Whilst a limited amount of points against the Dutch and the West Germans could have been expected, just a single point from two matches against Finland would’ve been their greatest cause for concern.

With the UK typically a 4-4-2 stronghold, it had probably come as a surprise that Terry Yorath had opted to switch to the 3-4-3 formation after their first two qualifiers. In theory, it made sense, as it would accommodate their three ace strikers Ian Rush, Mark Hughes and Dean Saunders. Whilst the latter had played wide in midfield to good effect at home to Finland, their only goal from a striker’s position in this qualification had come through Malcolm Allen in their final game away to West Germany.

11 players had featured in four games or more, with nine of these starting that number of games. This indicated a certain consistency and symmetry in team selection, and there were positives in the fact that some individuals had performed capably: goalkeeper Neville Southall was considered one of the world’s top stoppers, Saunders had given a good account of himself, indeed far better than his two more famous strike partners, and Barry Horne had shown some midfield grit in half of their performances. Altogether, though, it had been insufficient. Rush had probably been the greatest disappointment of all, with some dire performances until Allen came in. 23 players were in action throughout the six match long qualification stint.

Explanation to table: Total number of rated games: 6. Players need to have been rated in half or more of the games in order to appear on the list.