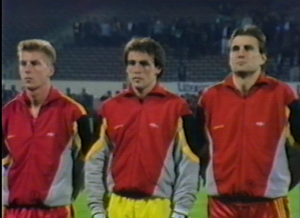 Group 7 was one of two groups in the European qualifiers for Italia’90 in which no team participated in the 1988 Euros. Belgium (1st seed) had however reached the semi-finals in the 1986 World Cup, and would be difficult to look beyond. They did however face good competition in Portugal (2nd) and Czechoslovakia (3rd), although the former were only just recovering from the aftermath of the Saltillo affair in 1986 and the latter recently had lost two of their star players. Switzerland (4th) could also be expected to pose problems for any team, although noone probably saw them as serious contenders for a qualification berth. Luxembourg (5th) were perennial whipping boys in the qualification campaigns, and teams would look to improve their goal difference against them. With question marks around both Portugal and Czechoslovakia, Belgium only strengthened their status as favourites in this group. Perhaps Switzerland even could create a small upset by challenging Portugal and Czechoslovakia for the second qualifying berth to Italia’90? Read more . . .

Match 2
18 October 1988, Stade de la Frontière (Esch-sur Alzette)
Luxembourg 0-2 Czechoslovakia
Routine win for visitors as they get their campaign up and running

Match 16
11 October 1989, St. Jakob Stadion (Basel)
Switzerland 2-2 Belgium
Dull game springs to life in the first 15 minutes of the second half as an injury-hit Switzerland grab a point, but Belgium all but qualified for the World Cup.

Match 18
25 October 1989, Heysel Stadion (Brussels)
Belgium 1-1 Luxembourg
An extraordinary result, but it was no less than Luxembourg deserved after holding their own throughout.

Thanks to an impressive run of four straight wins leading up to the final day, Czechoslovakia were still in with a shout for group victory as they headed out to Portugal. However, Portugal themselves still had a hope of qualifying, however vague, at the expense of Czechoslovakia: The hosts needed to win by four clear goals. Belgium had looked certain group winners until their last couple of matches, when they could only draw in Switzerland and, stunningly, at home to Luxembourg. As it were, neither of Portugal and Czechoslovakia could put the ball in the back of the net, and so Belgium did win. It is fair to say it had been deserved, as they had been the team with the highest top level.

Belgium had produced some of Europe's finest displays of counter-attacking football along their way to group victory. They had a large number of players capable of breaking with pace, power and precision, although it has to be said that they were also able to compete with sides equipped with a lot of physique, like Czechoslovakia. Some of the Belgian players had given displays of the highest order, and they were solid in every department; finding a weak link was almost impossible. With legendary coach Thys handing over the reigns to his understudy Meeuws towards the end of the qualification, it would be interesting to see how they would fare. The signs had perhaps not been the greatest with those two draws late on, but it could also be argued that Belgium had all but qualified already.

Czechoslovakia had always been as a dark horse for the group win, and they had almost been expected to qualify. They had needed a fine run towards the last round of fixtures to keep Portugal at an armlength's distance, yet there was this solidity about them throughout that made them look comfortable enough. In contrast to Belgium, Czechoslovakia were not capable of turning teams over on the counter. Instead, they would grind out results through the sheer volume of their play. They were one of the physically best equipped teams around. They had also been boosted by the return to national team colours for Straka and Kocian after the turn of the year.

Portugal had been something of an unknown quantity heading into the qualification. At home, they were able to compete with the best, though only drawing against both Belgium and eventually Czechoslovakia would be their undoing. They had only really been humbled in the heavy defeat in Brussels, and they had taken the expected eight points off the two lesser sides in the group. However, they did seem to be lacking in creativity from midfield, especially in the centre and towards the left. A proven goalscorer at international level was also missing, even if Rui Águas emerged with four goals. They did seem to be lacking in quality in a couple of positions in every match, so while they may have had seven or eight players at a reasonably high level, the team as a whole was uneven.

Switzerland had been looking to take points off the group favourites, especially at home, but would eventually only take one of a possible six points from these matches. This had been a huge disappointment, and their only wins had come against Luxembourg. Their team had looked somewhat unbalanced, as they'd often had a high number of left-footed players in central roles. Hermann had been unable to lift them, though they had done well to draw at home to Belgium in their penultimate home game, where manager Stielike had fielded a couple of exciting young players (Chapuisat, Knup, as well as Türkyılmaz, who was already a regular). Perhaps the future will have something in store for the Swiss.

Luxembourg were perennial strugglers, and they lived up to their billing. It must be said, though, that they had sometimes been unfortunate, and so it was probably just that they got one of the more remarkable single results during the entire World Cup qualification for Italia '90 by drawing 1-1 in Belgium. They also came close to following that up with another point in Switzerland, and so they could look back at their final couple of matches with a certain level of pride. Being part-timers on the international scene is a big ask, and at times they had been run in rings around, and a couple of their defeats had been of a heavy scoreline. And few younger players seem to have made the necessary step up to the required level.