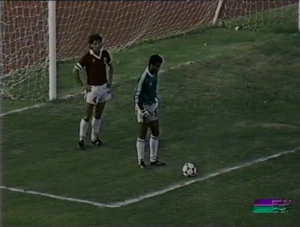 Venezuela, a country perhaps more famous for its baseball associations than for its association football. They were the usual whipping boys to the other South American countries, and with teams no less than Brazil and Chile in their group, would it be any different this time around?

Argentina born Carlos Moreno had succeeded Rafael Santana as their national team manager, and he had experienced an uplifting Copa América only weeks prior to the start of the qualification. Granted, they’d only gained a single point from their four group stage matches, but even that must have been seen as progress. Moreover, in the process, they had scored a total of four goals. Notably, all of those had come from attacking midfielder/forward Carlos Maldonado, a 25 year old student, who was playing part-time for Atlético Táchira in San Cristóbal, west in the country. Carrying a slightly stocky and quite compact frame, Maldonado was not totally unsimilar in build compared to plenty of historical South American ‘no 10s’. After that excellent haul in the continental championship, he looked set to be Moreno’s key figure in the World Cup qualification. It should furthermore be pointed out that Atlético Táchira had been managed by Moreno from 1985 and through to his taking over of the national team ahead of the 1989 Copa América. He had enjoyed some success there south west in the country, securing a league title during the 1986 season.

Used to losing just about every single match they were playing, Venezuela had received a fine boost in their final game of preparation ahead of the Copa: Beating Peru 3-1 on home soil in Maldonado’s San Cristóbal. In the tournament itself, played out in Brazil, Venezuela had scored their first ever goal against the Brazilians (3-1 loss) in their opening tie, before losing 4-2 against a strong Colombian select (both of Maldonado’s two goals had come as consolation strikes with the opponents already 4-0 up). Their third game saw them take the lead against said Peru, even if it had only lasted for about a minute until the Peruvians had equalized. In their fourth and final appearance, Venezuela had gone down heavily to Paraguay, perhaps partly including a reaction to the tournament so far.

There had been no time for friendlies ahead of the opening qualifier. Brazil were to visit Caracas, with the Chileans coming only the following week. Despite the uplifting tendencies in Copa América, Venezuela must have realized their tag as also-rans in this group. A single point would’ve been deemed a success.

Qualifier 1: Venezuela 0-4 Brazil
30.07.1989, Estadio Brígido Iriarte (Caracas)
Line-up (4-4-2): Baena – Pacheco, Acosta (c), Morovic, Betancourt – Cavallo, Añor (Carrero 71), H Rivas, Maldonado – Febles (Arreaza 54), Fernández
In their version of 4-4-2, Venezuela stand up well to Brazil in the first half, at least defensively, where they prove difficult to break down. However, they are unable to cause trouble down the other end themselves, and they fail to commit enough players forward in the first half. After the break, though, they will ease up somewhat on their defensive stance, and it will prove costly as the visitors time and again make use of the huge pockets of space down Betancourt’s left hand side. Still, Venezuela can take pride in how they acquitted themselves until they tired, and there were some fine performances, most notably from goalkeeper Baena, but also in the first half from Betancourt and midfield man Añor.

Qualifier 2: Venezuela 1-3 Chile
06.08.1989, Estadio Brígido Iriarte (Caracas)
Goal: Fernández
Line-up (5-3-2): Baena – Torres, Paz, Acosta (c), H Rivas, Betancourt (Añor h-t) – Cavallo, Carrero, Febles (Fernández 52) – Gallardo, Maldonado
Moreno had sat his team up in a 5-3-2 formation this time around, with Rivas retracting back into central defence since last time out. Three player changes in total. Betancourt again displayed his defensive shortcomings at left-back, and Venezuela looked improved as they switched to 4-3-3 after the break. They huffed and puffed until substitute Fernández’ goal back, but had no more power left as they owed it to ‘keeper Baena to keep the scores down.

Qualifier 3: Brazil 6-0 Venezuela
20.08.1989, Estádio do Morumbi (São Paulo)
Line-up (5-3-2): Baena – Pacheco, Torres, Acosta (c), Paz, H Rivas – Cavallo, Maldonado, Carrero – Gallardo (Febles h-t), Arreaza (Tarazona 77)
Following their two successive home defeats, Venezuela would’ve harboured few hopes of upsetting the odds in São Paulo. Moreno had lined them up in 5-3-2, with designated markers for Bebeto (Torres) and Careca (Paz). Cavallo was the supposed midfield enforcer, Carrero was looking to distribute, whilst Maldonado had been hoping to enjoy some success through the middle, with both forwards playing wide. However, they were on the back foot for large spells, owing it to another excellent Baena display to keep the scores down. In particular the second half was difficult. The Venezuelans had been lucky to escape with ‘only’ six.

Qualifier 4: Chile 5-0 Venezuela (neutral ground)
27.08.1989, Estadio Malvinas Argentinas (Mendoza, Argentina)
Line-up (5-3-2): Gómez – Torres, Morovic, Acosta (c) (Gallardo 59), Paz, Cavallo – Carrero, Maldonado, López – Fernández (Febles h-t), Arreaza
For this their final qualifier, Venezuela were once again lined up in a 5-3-2 formation. They had a couple of players missing, and had recalled Morovic and Fernández for starting berths, as well as donning the goalkeeper’s jersey to back-up choice Gómez. López had been brought into central midfield alongside the experienced Carrero, while the disappointing Maldonado continued in his advanced role between the two wide forwards. They ultimately shipped five goals, but it could’ve been worse. Their first half display had been quite aggressive, and stand-in left-back Cavallo was fortunate to remain on the pitch beyond ten minutes (!). They completely abandoned any defensive shape in the trail of losing captain Acosta to a persistent injury.

Venezuela hardly came into the qualification expecting to compete on par with Brazil and Chile, and their four match record was probably around what had been expected beforehand. They gave a decent account of themselves in both home matches, where the packed national arena helped spur the players on, at least until they had run out of steam, with goalkeeper César Baena, easily their best player throughout the qualification, standing between them and further embarrassment. He clearly deserved to finish top of the pile in the internal player standings, and the reason for his back-up role in the final qualifier was surely little other than manager Carlos Moreno wishing to see José Gómez at international level.

The Venezuelans, famously known as ‘la Vinotinto’, started out in a 4-4-2 formation against strong group favourites Brazil, and they successfully fended off the threat of three world class strikers in Romário, Careca and Bebeto, only to concede three times towards the latter stages as the players tired and space opened up for the visitors. In their three subsequent games, Venezuela would be seen in a 5-3-2, where there were two central midfielders behind attacking midfielder/deep-lying forward Carlos Maldonado, of whom so much had been expected following his four goal haul during the Copa América. However, he was well attended to, and could only register a single assist over the four matches. Still, he was one of two players to feature in each and every single one of the 360 minutes. The other was midfielder Roberto Cavallo, who played as an emergency left-back in the final match on neutral ground in Argentina.

Much of their problems stemmed from being completely overrun in midfield, where they were operating with two players at the base. One of them was typically playmaker Nelson Carrero. In all matches, the Venezuelans were playing with two wide forwards, and Ildemaro Fernández, their solitary goalscorer, was probably the more impressive one throughout the qualification.

At the back, various players filled the respective defensive roles, but there was continuity in the libero position, where captain Pedro Acosta was leading by example. After Baena, he was their strongest and most consistent performer, even if he had taken a big knock during their opener at home to Brazil, and would play the rest of the qualification with plenty of pain. He ultimately had to go off after an hour of the final match, a game where he had been less impressive than in their other three.

Venezuela struggled to rock the foundations of the opposition, although they had sporadic opportunities themselves, predominantly over the two matches against the Chileans. Still, they also owed to the opposition’s attackers to keep the scorelines down to half-respectable levels.

Surely, as per norm, ‘la Vinotinto’ would not get much international recognition. Still, they were plucky and battled away with what they had in their locker. They might not have got the results which they had been hoping for prior to the start of the qualification, particularly seen in light of their uplifting Copa América campaign, but it should be remembered that they were up against one of the favourites to win the World Cup proper, and also against a very sound Chilean team, which would give the Brazilians a run for the money.

In the wake of their qualification campaign, several members from Venezuela’s ‘older brigade’ of players would retire from international football. They were Pedro Acosta, René Torres, Nelson Carrero and Juan Febles. Acosta had been a stalwart through a decade, and had featured during the 1980 Olympic Games in Moscow. He was already a legend in footballing terms in his home country, and he’d leave a major gap at the heart of their defence. The others, too, would be missed for their footballing qualities, and, surely, just as much for their off the field leadership abilities.

Incredibly, Venezuela would not play another official international until the 1991 Copa América in Chile. Coach Carlos Moreno had also been replaced by then, with Uruguayan journeyman Víctor Pignanelli having taken over the reins.