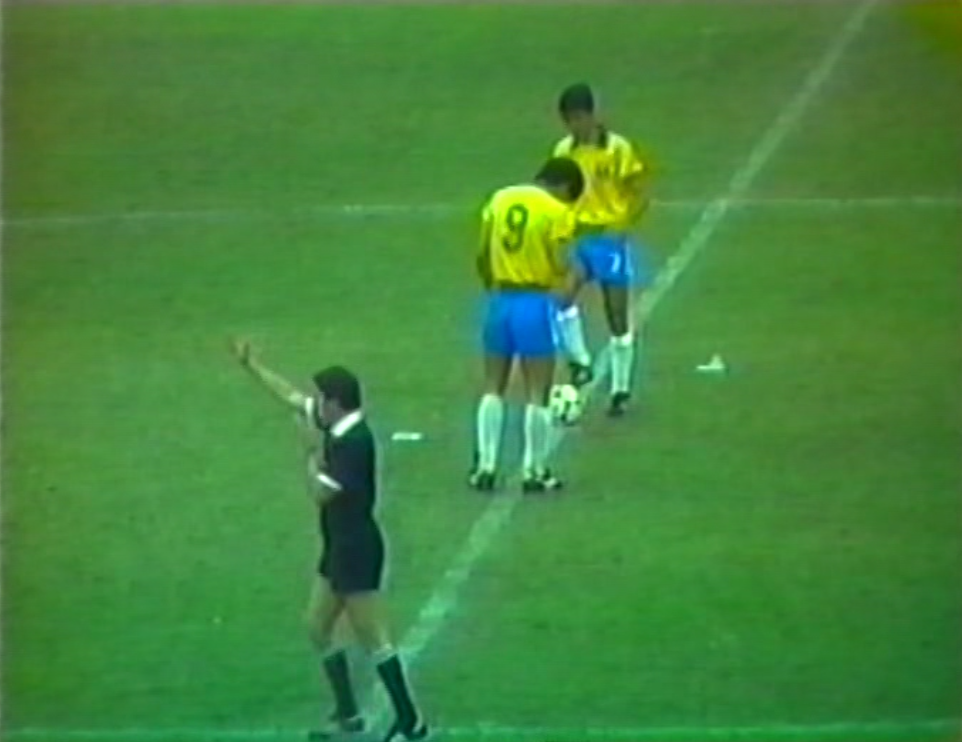 Sebastião Lazaroni, 38 years old by the start of the qualification, had been appointed earlier in the year as Brazil’s new coach. He had a much more pragmatic outlook on footballing tactics than his recent World Cup predecessors, and perhaps was this the way forward now that the top European nations seemed so strong both tactically and physically? Artistically, Brazil were still right up there, and they entered the World Cup qualification on a high, having just arrived from a home soil Copa América triumph, their first continental championship title for 40 (!) long years. They had conceded just a solitary goal right throughout the tournament, and they had a front two with Romário and Bebeto looking ever so dangerous. Read more…

After a highly successful continental championship run on home soil in a solid 5-3-2 formation, manager Lazaroni might have got greedy in his appetite for goals for this journey to Caracas. The plucky but limited hosts were able to put in a fine defensive performance in the first half to deny the Brazilians more than the goal which Branco had given them as early as six minutes, and they struggled to get truly going in midfield with just the two men of Dunga and Valdo there. However, they improved after the break, seeing Careca in a deeper role, though only when Silas replaced the Napoli striker would they truly up the ante, and they’d finish the fixture with four goals to their name. Deservedly so.

Brazil lose Romário to a fourth minute red card, Branco to injury a few minutes later, and then they have the majority of possession against hosts who are also reduced to ten men before 15 minutes of play. Strikes from distance are the order of the day; Dunga comes closest from 30 yards. Brazil, back in 5-3-2 (then 5-3-1), take the lead thanks to a mad own goal, and are unlucky to have Bebeto’s ‘goal’ for 2-0 chalked off incorrectly. Mazinho also goes off injured, and Chile equalize in highly controversial fashion through late indirect free-kick inside the six yard area.

Goals galore had been Lazaroni’s recipe for the hosts, who more or less knew they would win even long before the game started. A fit again Careca took the suspended Romário’s place alongside Bebeto, while São Paulo’s Ricardo came into defence at the injured Aldair’s expense. Brazil had been well on top during the first half, but from around 55 minutes and onwards they would lay total siege on the visitors’ goal. Valdo had missed a first half penalty, though it didn’t matter. Careca added two late goals to take his haul to four on an utterly dominant afternoon. They’ll just hope the Venezuelans don’t fold completely in their final game at Chile next.

Lazaroni’s sole line-up change since two weeks earlier was Aldair’s inclusion on Ricardo Rocha’s behalf. In a game where a draw sufficed, the hosts went about the game in an attacking manner; they certainly did not aim to defend their way to World Cup participation. Despite creating a number of opportunities in an inspired first half display, they failed to beat the impressive Rojas. Then Careca’s breakthrough goal early in the second half further emphasised their intentions, and though they saw the visitors briefly on top, Brazil had regained their superiority by the time the game was halted on 69 minutes following that ‘injury’ to Rojas, who had alledgedly been hit by a firecracker thrown from the stands. The game was ultimately forfeited as the Chileans took to the dressing room in support of their ‘keeper, and a week later FIFA awarded Brazil a 2-0 win according to the existing guidelines. The situation got compared to the Netherlands v Cyprus qualifier for the 1988 European Championships, when the Cypriot ‘keeper had also been struck by firework. However, due to the self-inflicted nature of Rojas’ ‘injury’, the decision to award Brazil the win was an obvious one.

Brazil, through the result which they gained on the final day of qualification, albeit the score had ultimately been settled in the FIFA headquarters due to the unfortunate circumstances with Chile ‘keeper Roberto Rojas, made it through to the World Cup, and their presence at Italia ’90 would be their 14th in succession. Thus, they kept their record intact of qualifying for each and every World Cup tournament as the only nation to do so.

‘O técnico’, Sebastião Lazaroni, had brought Brazil its first Copa América triumph in 40 years only two weeks before their first of four qualifying matches. He had also brought an added focus on defensive security, and under his tutelage they had played with a libero behind two central defenders. It may not have been every Brazilians’ cup of tea, but they had looked solid throughout the continental championships on home soil, conceding just once from seven matches.

The playing material available to the manger for the qualification mirrored the squad which he had ruled over for the Copa. He had been hoping to have France based libero Carlos Mozer at hand, though his club Marseille did not want him absent from their campaign for a lengthy spell. Though Mozer had travelled to Brazil to join up with the team, he would return to the French riviera without having participated in a single qualifier. Lazaroni would have to keep faith with Mauro Galvão, who was perhaps not a high profile player like Mozer, but who nevertheless had looked solid enough. In addition, Jorginho, the attacking full-back, would report back to duty following an injury which had prevented him from featuring during the Copa América campaign. As soon as the qualification was through, he would travel to West Germany and start his new life with Bayer Leverkusen, for whom he had signed.

Despite winning comfortably in the end, Brazil did not always have it all their way in Caracas in their opener. The 3-4-3 formation which Lazaroni had implemented did not work particularly well, and Careca, another whose injury had prevented him from participation during the South American championships, was clearly still not totally fit. Once he was replaced with midfielder Silas and the recent formation was restored, did Brazil start truly dominating their lowly hosts and adding to their tally.

The next three matches all saw the Brazilians turn out in that 3-5-2/5-3-2 formation which Lazaroni had favoured. They had stood up well to the physical test in Santiago, where Romário had been provoked into punching Chile’s right-back Hisis to get himself sent off almost as soon as the game had started, and had been unfortunate to have a perfectly good goal by Bebeto chalked off for offside, something which would’ve meant a 2-0 lead. They’d concede a highly controversial equalizer late on, though an expected home rout against Venezuela, in which Careca netted no less than four times and thus signalled his return to form, and a subsequent triumph in Rio against the Chileans, saw them through.

Quality in every single position made a telling difference. Brazil, despite facing hefty resistance by the Chileans, clearly deserved to progress from their group. What will be remembered, though, is the scandalous way in which their campaign ended, although it wasn’t their fault. How the Chilean team decided to embarrass themselves by feigning injury to goalkeeper Roberto Rojas, after a firecracker which had, admittedly, been thrown onto the pitch by a female member of the crowd and landed in his vicinity, the guilty party quickly identified as a woman in her mid 20s named Rosinery Mello. The drama which followed was senseless, though. Chile’s hope had been forcing a replay. FIFA decided to award Brazil a 2-0 win based on a medical report which confirmed that Rojas had not been injured by the firecracker.

It should be noted how the richly talented Romário only really featured once, as he’d thrown his punch in that game in Chile so early that the game had barely had time to begin. He was promptly banned for three matches, and though the Brazilian FA desperately attempted a plea to FIFA, the Netherlands based striker would play no further part in the qualification. He had returned to Brazil ahead of the final qualifier, at home to Chile, but once FIFA’s final decision of maintaining his suspension had been made, Romário immediately headed back to his Eindhoven home. Later, his ban would be reduced to two matches, meaning he would be able to take part in Brazil’s opening World Cup fixture.

Thanks to his scintillating performance during the four goal haul in the 6-0 thrashing of Venezuela, Careca finished top of the player ratings pile, both for his country and also for the qualification group as a whole. There had been inspired performances all around the pitch, and in particular had Brazil looked strong through their regular midfield three, with Dunga sitting deep behind Silas and Valdo, who both enjoyed plenty of attacking freedom.

With the quality in depth which was available to manager Lazaroni, Brazil would undoubtedly travel to Italy as one of the favourites for the title. If they were to win, it would be their fourth triumph altogether, something which no nation had so far achieved.

Note: Maximum amount of minutes was 339, due to the abandoned final game