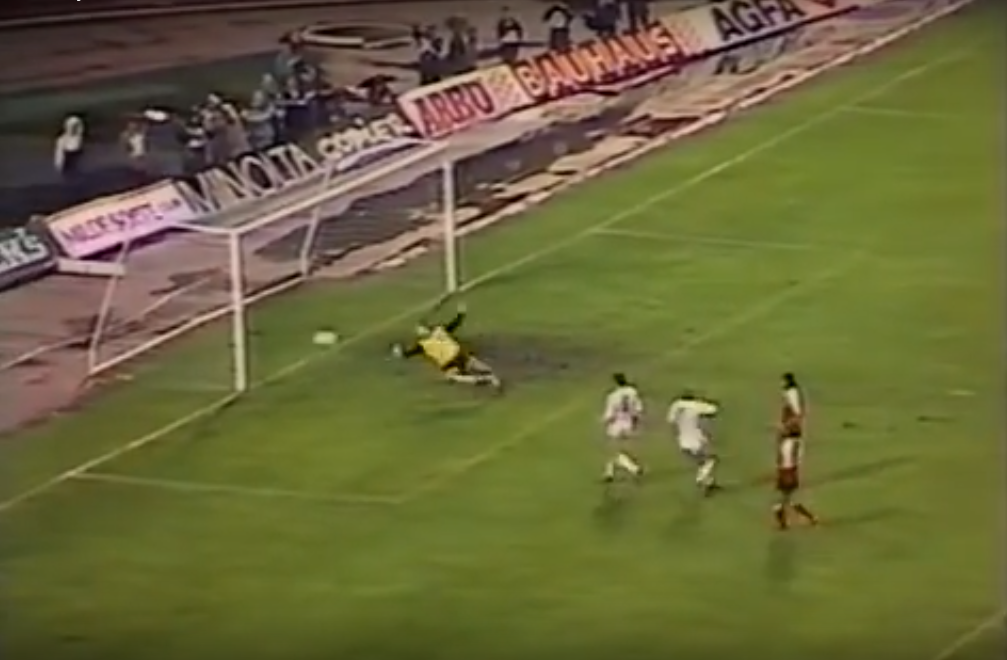 The draw for the qualification was held in Zürich 12 December 1987. 13 qualifying berths had been allocated to the European zone (in addition to Italy), as decided by FIFA at a meeting in Zürich on Friday 21 August 1987. The draw gave the following seven groups:

The 32 teams had  prior to the draw been seeded and distributed in five pots.  The precise criteria for the seedings have not been possible to find. Results in the last World Cup and EURO qualification ostensibly counted for something, but why was then for example Easy Germany placed in pot 2 and Northern Ireland only in pot 3?

Results are listed in chronological order. For sorting by group, please select a group above.

Group 4, match 2, Olympisch Stadion (Amsterdam)
Netherlands 1-0 Wales
Despite the heroics of Neville Southall, the home side triumphed in this qualifying opener for both sides thanks to Gullit’s late show of aerial power.

Group 3, match 2, İnönü Stadyumu (Istanbul)
Turkey 1-1 Iceland
Despite dominance, Turkey only have a point to show for.

Group 1, match 1, Olympiakó Stádio (Athens)
Greece 1-1 Denmark
An aggressive home side earn a deserved point despite the visitors’ fight back.

Group 1, match 2, Vasil Levski (Sofia)
Bulgaria 1-3 Romania
Romania off to a brilliant start after an attacking display in Sofia.

Group 2, match 2, Stadion Śląski (Chorzów)
Poland 1-0 Albania
Win could and should have been by a greater margin as Poland were dominant.

Group 6, match 7, Ta’ Qali (Valletta)
Malta 0-2 Spain
Without ever reaching their pinnacle, Spain without too much bother see off spirited Malta.

Group 2, match 4, Stadiumi Qemal Stafa (Tirana)
Albania 0-2 England
England do what is expected of them and not so much more.

Group 6, match 9, Népstadion (Budapest)
Hungary 0-0 Republic of Ireland
Lacklustre performance by a reshaping Hungary, the Irish not much better.

Group 6, match 10, Estadio Benito Villamarín (Seville)
Spain 4-0 Malta
Spain easily deal with ten man Malta, who were all set about damage limitation in the second half after being reduced to ten men on the stroke of half time.

Group 6, match 11, Népstadion (Budapest)
Hungary 1-1 Malta
Malta left with a very well deserved point, and could have punished the Hungarians on the break even further.

Group 1, match 5, Olympiakó Stádio (Athens)
Greece 0-0 Romania
Romania the better side for an hour, until Greece decide to put pressure on Romania in the build-up phase. A draw probably just about fair in the end.

Group 3, match 8, Respublikanskyi Stadion (Kiev)
Soviet Union 3-0 East Germany
USSR did not need to fire on all cylinders to claim both points.

Group 2, match 6, Råsunda (Stockholm)
Sweden 2-1 Poland
Sweden struggle to break down Poland, but are victorious thanks to set-pieces.

Group 1, match 8, Idrætsparken (Copenhagen)
Denmark 7-1 Greece
The visitors are nowhere near as the hosts turn on the style after the break and score five times against ten men.

Group 2, match 7, Wembley Stadium (London)
England 3-0 Poland
England dominate and win again, and have yet to concede. Poland’s campaign all but over.

Group 2, match 8, Råsunda (Stockholm)
Sweden 0-0 England
England marginally the better side as both ‘keepers make saves to keep the opposition out. A second scoreless draw between these two see them both edge closer towards qualification.

Group 2, match 9, Råsunda (Stockholm)
Sweden 3-1 Albania
The home side have too much nouse for an Albanian team with little to play for. They seem untroubled even after going behind.

Group 1, match 9, Yuri Gagarin Stadion (Sofia)
Bulgaria 4-0 Greece
Greece have three players sent off in the second half and fall to graceless defeat against a home side turning the screw late on in miserable conditions.

Group 2, match 10, Stadion Śląski (Chorzów)
Poland 0-0 England
Poland well on top during an all-action first half, but England close the space in an uneventful second. The visitors qualify for the World Cup, Poland are out.

Group 6, match 17, Lansdowne Road, Dublin.
Republic of Ireland 3-0 Northern Ireland
Big win all but sees the Republic through to Italy.

Group 7, match 16, St. Jakob Stadion (Basel)
Switzerland 2-2 Belgium
Dull game springs to life in the first 15 minutes of the second half as an injury-hit Switzerland grab a point, but Belgium all but qualified for the World Cup.

Group 2, match 11, Stadion Śląski (Chorzów)
Poland 0-2 Sweden
Understandably lacklustre Polish performance under the circumstances, and a thoroughly professional job by the Swedish to make their qualification certain with a well-taken win.

Group 7, match 18, Heysel Stadion (Brussels)
Belgium 1-1 Luxembourg
An extraordinary result, but it was no less than Luxembourg deserved after holding their own throughout.

Group 2, match 12, Stadiumi Qemal Stafa (Tirana)
Albania 1-2 Poland
Albania fail to claim a single point during the qualification thanks to late Ziober winner for the visitors.

Group 4, match 12, Müngersdorfer Stadion (Cologne)
West Germany 2-1 Wales
FRG need to come from behind to win and join the Dutch for Italia ’90.