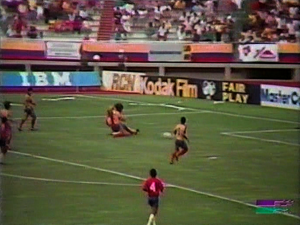 Was Group 2 perhaps, on paper, the tightest looking one among the CONMEBOL groups? On the background of merits from recent years, it could possibly be claimed that Paraguay, who had participated in the 1986 World Cup and also made it to the final round of the recently held Copa América, were favourites, though that would be taking the promise of Colombia and their Atlético Nacional’s recently crowned South American champions out of the equation.

It had been decided beforehand that this was the group where the winners would have to play off against the winners of the Oceania confederation in a two-legged affair, in order to decide who would progress through to the World Cup. Since the OFC zone had finished on 16 April, more than four months prior to the start of this qualification group, it was already known that the winners would be facing off in the intercontinental play-off against Israel in October.

Paraguay had made it past the group stage in the 1986 World Cup, and they had shown plenty of promise in the continental championships, which had rounded off only the previous month. In between, they had failed to make a mark on the 1987 issue of Copa América, where they had also lost to one of their group rivals this time around, Colombia. Their coach was an Argentinian by the name of Eduardo Luján Manera, who had been appointed last year, and who had succeeded Silvio Parodi. However, only days prior to their first qualifier, Manera, despite Paraguay advancing through to the final phase of the recently held Copa América in Brazil, would be replaced by Cayetano Ré, the manager who had led Paraguay during the 1986 World Cup.

Colombia had their core from leading domestic club Atlético Nacional of Medellín. Not just a large playing crop hailed from the club which had triumphed in the Copa Libertadores back in May, when they had defeated Paraguay’s Olimpia of Asunción, but even manager Francisco Maturana. The highly talented 40 year old had taken over and led the team for the 1987 edition of Copa América, where they had finished third, even beating host nation Argentina in the third-place play-off game. In addition to the large Nacional contingent, there was also the exciting, European based talent of playmaker Carlos Valderrama. In the recently held continental championships, Colombia had been edged out from progressing beyond the first group stage by the hosts and Paraguay.

Ecuador – were they anything more than also-rans in this group? Well, they might, again, have failed to progress beyond the first group stage in the Copa América, but in Yugoslav coach Dušan Drašković, a 50 year old about a year into his first coaching assignment abroad, they appeared to have someone quite visionary, and who was looking to utilize their playing resources to the maximum. They’d given a fine account of themselves a few weeks ago in Brazil, where they’d defeated Uruguay and then held Argentina, only to fall short against Chile in their final game. Only two goals against, both in the final fixture, from four matches had been a nice feat.

Colombia got their qualification campaign under way with a fine performance and not least an excellent result against neighbours Ecuador. The hosts were the better side for most of the game, even if they did not produce a whole lot of goalscoring opportunities. 32 year old striker Arnoldo Iguarán proved his worth in the air with two powerfully executed headers, and substitute Luis Fajardo hit the bar with another late on. The visitors lacked punch up front, and were rarely able to threaten the eccentric René Higuita between the Colombian sticks.

Paraguay snatch victory deep into time added on, and get their World Cup qualification campaign up and running with a hugely important win against a Colombian team which had won the previous weekend. The hosts have several players back after missing the Copa América campaign, and they dominate possession for the majority of the game. Colombia, who had looked so neat during their win against Ecuador, were second best for most of the game. Substitute Javier Ferreira gave the hosts an early second half lead after coming on, and then Leonel Álvarez saw red for a cynical foul. Ten men Colombia equalised late on through ace marksman Arnoldo Iguarán, though they had a precious point snatched away from them six minutes into injury time after René Higuita had fouled Rogelio Delgado and conceded a penalty. The other goalkeeper, debutant José Luis Chilavert, converted to win the hosts the tie.

Featuring in their third successive Group 2 match, Colombia return home with a valuable point, although they could well have won the game on balance of opportunities. The game is intense, it is played with a focus on sportsmanship, and there’s an impressive flow, with relatively few niggling fouls. While both teams create solid goalscoring chances, neither can take advantage, and the group appears to be shaping for a two-horse race between the Colombians and Paraguay. Vitally, today’s visitors now can look forward to inviting the Paraguayans home. Ecuador will need to improve on their chances conversion in order to still have a say in the group.

The fourth game of the group saw Paraguay take over in the driver’s seat, despite a not all too convincing display against a neat Ecuadorian team. The visitors saw plenty of the ball, but once again they were relatively tame up front, and even failing to conjure much from midfield despite a couple of changes in their select. Strong centre-forward Cabañas returned with aplomb as he powered in a first half header from Neffa’s tasty cross. Delgado lead by example from the back, and won just about every challenge he entered. Still, in general, the hosts could not quite find their rhythm, although they netted a second when Morales failed to get to Zabala’s cross, for (Javier) Ferreira to tuck home from close range. Avilés prodded home a late consolation goal, upon which Chilavert got himself sent off as he tripped the goalscorer who had gone to retrieve the ball to rush back for kick-off. Romero took over in goal with no further substitutions available, but he never had anything to do in the remaining game time. Huge win!

A point in Barranquilla would see Paraguay win the group. They begun the game sitting deep, and their ambition was to hit the Colombians on the counter. Their tactics were spot on for the opening half, and thanks to a terrific Mendoza strike a minute from the break, they went in at the interval a goal in front. The hosts had not quite clicked in the opening 45 minutes, but two player substitutions and a change in formation at half-time had rejuvenated them. They came out for the start of the second half in a 4-3-3 which suited them to perfection, and taking over from the hapless Valderrama as the lead playmaker was Fajardo, who completely bossed the game for half an hour. Goals from Iguarán and Hernández turned the game around, and in the end, Colombia were full value for their win. Still, Paraguay have it all in their hands: A win in Ecuador next week will see them through to the intercontinental play-offs.

In what was a must-win for Paraguay, they arrived in Ecuador with an attacking formation (4-2-4), but despite having all of their stars available to them, even the returning Cañete in midfield, they fail to gel properly. The Ecuadorian hosts, who have little but pride to play for, give a fine account of themselves, and though they fall a goal behind following a nicely built attack from Paraguay, which had seen Mendoza and Cabañas combine to set Neffa up for a tap-in, Ecuador do not lose their way. Fajardo is moved up into midfield from almost a starting third centre-back role, and it is he who plays Aguinaga in for the equalizer. After Nunes fails to hit the back of the net from 12 yards, the hosts strike the post through Avilés and see an Aguinaga header just wide right on half time. The second half takes longer to truly heaten up, but the final 20 minutes are packed with incidents: Two home goals, to rule Paraguay out of the qualification picture, as well as further chances and a sending-off for either side. It was a tactical triumph for Ecuador’s many pacy transitions. The visitors had just been collectively poor, a couple of players apart.

In a group which ultimately proved to be tighter between first and bottom than had probably been expected beforehand, Colombia held on to the top spot and earned the right to participate in the intercontinental play-offs. It had, however, far from been plain sailing, and had Paraguay only made use of a couple of ‘match points’ in their two final matches, they’d have rounded the qualification off at the top of the pile.

While Paraguay could boast plenty of experience throughout their team, with the bulk of their regulars having participated in the previous World Cup, Colombia had relied on higher peak levels from some of their performers. They had opened the group with that 2-0 win against Ecuador, and through his two goals, seasoned striker Iguarán was on his way to finishing top of the scoring charts. They did not always have it all their way, but they won the game which mattered when they came from a goal down to topple Paraguay at home. In that second half in Barranquilla, substitute Luis Fajardo had given an unreal performance, and indeed one of the most sensational individual turn-outs during the entire CONMEBOL qualification campaign.

Paraguay had started well, winning both their home matches, something which saw them lead the way even with a game less played than Colombia, but their travel sickness ultimately got the better of them as they proved to steadily deteriorate as the qualification wore on. They had experienced precisely the opposite of their final opponents, Ecuador, who had probably surprised quite a few people along the way. The plucky Ecuadorians had perhaps rode their luck a bit in the goalless home game against Colombia, but then given Paraguay a scare even as they lost 2-1 in Asunción. In the final game of the group, they came back from a goal down to seal a highly deserved win against a Paraguayan team which towards the end of that tie had more or less surrendered.

Easily the most controversial and incident-packed match of the group had been Paraguay’s 2-1 home win against Colombia, when flamboyant goalkeeper José Luis Chilavert had become match-winner from the penalty spot way into injury time, outwitting his Colombian counter-part René Higuita from the spot, after the latter had clattered into host captain Delgado. The visiting players needed to be restrained by the military police, and it took about five minutes before the game could resume upon the penalty decision. Six yellows and a red card were issued during the game.