There is not a whole lot of information available as far as the Chinese Taipei squad from late 1988 goes, or at least not through conventional search. However, we have been able to retrieve a souvenir programme from the two-legged qualification series against New Zealand, so at least there’s little player pictures with names attached which we can present. 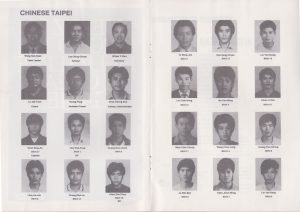 Team manager was Lo Jyh-Tson, a former national team player, who had featured in World Cup qualification back in 1981. His assistant was Huang Feng.

The 18 man squad which had travelled for the two matches in New Zealand were:

If this information, which has been extracted from the match series programme (numbers) and New Zealand football weekly publication ‘Soccer Express’ (positions), is correct, then team chief Jyh-Tson had travelled with a squad consisting of two goalkeepers, seven defenders, five midfielders and four forwards. It seemed fairly balanced.

Chinese Taipei had not been in action since their final Olympic Games qualifier on 27 March, more than eight months earlier. They were not a team associated with international friendlies. Their last such appearance had been a double header against Bahrain in September 1986, their only two friendlies during the entire 80s.

In the Olympic Games qualification, for the 1988 occasion in South Korea, Chinese Taipei, or Taiwan as is probably a more commonly used name (Chinese Taipei for various sporting events), had twice lost 3-0 to Australia in the first round. They had subsequently won 5-0 against Western Samoa in a play-off game to decide which of the two losing first round nations would progress through to the second round (Western Samoa, incidentally, had lost 19-0 on aggregate over their two ties against New Zealand).

The second round of the Olympic Games qualification was a group event, which was played out in Australia and in New Zealand throughout March. They lost all six matches against Australia, Israel and New Zealand with a combined score of 3-23. Therefore, they probably wouldn’t have rated their chances of progressing through to the group stage in the World Cup qualification as very good.

First leg: Chinese Taipei 0-4 New Zealand
11.12.1988, Newtown Park (Wellington)
Line-up: Wen-Fong – Wen-Chieh, Kuo-Ming, Yao-Heng (Pao-Chung 77), Jiunn-Ming, Jia-Leh, Chin-Chung, Chih-Hung, I-Chiu, Yie-Cheng, Sing-An (c) (Deng-Chyan 55)
Chinese Taipei had not managed to provide a stern test to a New Zealand side which had probably been somewhat unsure of their own strength beforehand. Loss by a four goal margin meant they would only play through the motions in the second leg in four days’ time.

We have precious little information about the Chinese Taipei side. Despite the fact that they would’ve known New Zealand relatively well as this was the fourth straight World Cup qualification in which they met, they offered meagre resistance. Both fixtures were played out in New Zealand, with the first encounter Chinese Taipei’s ‘home’ tie. Having lost 4-0 to an attacking and enthusiastic opponent, the second leg was always just a formality.

In general smaller than their opponents, Chinese Taipei could not contain New Zealand in the air. They had some industrious players, and were looking to make use of their pace, but as a unit they had been nowhere near standing up to the opposition.

A total of 13 players had been in use across the two games. It is impossible to say in which direction the game was headed in Taiwan in the trail of this double-header.

Exit before the group stage: 8-1 aggregate loss against New Zealand.