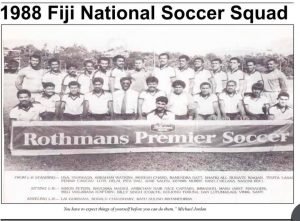 Fiji were hardly a country thought of in footballing terms, or at least not for the right reasons. They had lost 10-0 to Australia in qualification for the 1982 World Cup, and now, eight years later, they were facing the same opponents yet again.

Manager was a charismatic Indo-Fijian man by the name of Billy Singh, whose father had in fact led the Fijian national team for a total of 16 years, from 1960 onwards. Assisting Mr Singh was Immanuel Manu, a coach well known in the country of the many tiny islands for his preaching of discipline. Alas, Billy Singh passed away in 2010.

The 1982 World Cup qualification had been Fiji’s debut at the biggest of international stages. Despite that 10-0 loss to the Australians, and indeed a defeat by an even wider margin only two days later, 13-0 (!) in New Zealand, Fiji had emerged from the qualification with a level of pride, as they’d beaten Chinese Taipei 2-1 at home, and also managed three draws from a total of eight matches. They did not feature in qualification for the 1986 World Cup.

The Melanesian Cup was a competition contested by island nations in the South Pacific, and the 1988 version was held in the Solomon Islands. The hosts and the Fijians had drawn in the group stage, something which meant both were undefeated and destined for the final. In the lead-up to that final, a message of great intimidation was conveyed into the path of the Fijian visitors: “You had better not win this game.”

Exclusively relived for italia1990.com by midfielder Ronald Chaudhary, who, already at 19, was an integral part of the team which went on to defeat the Solomon Islands in front of a very partizan crowd: “We turned up with just nine men, as we took the pre-match threats very seriously, and were prepared to lose for the sake of returning home alive. I scored the first from 25 or 30 yards, Abraham Watkins added the second from a free-kick, and Ratu Suliano slotted home the third. The crowd then turned on their team and got behind us, and our officials made a call to the hotel and brought the rest of the players so we could carry on with eleven men. It didn’t mean anything when the Solomon Islands scored a consolation goal. That’s how we won the first Melanesian Cup in Honiara.”

Two wins and a draw against New Zealand in a three-match series played on home soil set Fiji up in good stead for their opening qualifier at home to Australia.

Melanesian Cup (final): Solomon Islands 1-3 Fiji
26.10.1988,
Goals: Chaudhary, Watkins, Suliano
Line-up
Apparently, in the build-up to the final, there were threats made, unbeknownst by whom, towards the Fiji squad: “You had better not take to the field.” This had, naturally, struck some fear among players, but encouraged by legendary captain Pita Dau, they eventually went out and won the tournament, beating the host nation in the final.

First leg: Fiji 1-0 Australia
26.11.1988, Prince Charles Park (Nadi)
Goal: Madigi
Line-up: Buli – Watkins, Lutumailagi, Dau (c) (Ali 71), Nemani, Delai – Sami, Vuilabasa, Evans – Peters, Watisoni (Madigi h-t)
Fiji opened their World Cup qualification campaign with an absolutely stunning 1-0 home win against Australia, massive favourites to make it through to the qualification group stage in the two-legged first round tie. We’ve got very little to go on other than a few folk tales and some scant newspaper material, but apparently Fiji’s physical prowess on a bumpy, soggy pitch and in surroundings hostile to the visitors, they triumphed thanks to a left-footed half-volley from substitute striker Madigi midway through the second half.

Second leg: Australia 5-1 Fiji
03.12.1988, Macquarie Fields (Speers Point, Newcastle)
Goal: Delai
Line-up (5-3-2): Buli – Nemani, Lutumailagi (Watisoni 78), Dau (c), Watkins, Delai – Sami, Vuilabasa, Evans – Peters, Madigi (Ali 58)
Normal order was resumed through this second leg result in Newcastle. Fiji attempted to sit back and defend their slender first leg lead, but were undone as early as the ninth minute, thanks to a wonder strike from the home captain. They were two down inside 25 minutes, but they were still just an away goal from upsetting the odds, and despite the home side being on the front foot, the plucky Fijians made it far from a comfortable passage for them. When the elusive third goal came 20 minutes from time, the tie was more or less over as a contest, and by the time a mass-brawl erupted, ultimately leading to the sending-off of substitute Watisoni, the visitors were five goals down on the night.

Exit before the second round group stage: 5-2 aggregate loss against Australia.

Despite arriving for the start of the qualification with a squad which in Fijian terms was unprecedented in its strength, few probably harboured genuine belief that they would actually advance through to the qualification group stage in contest with one of the region’s big sides. Still, with plenty of spirit and determination, and not least physical strength, Fiji did defy the odds to earn a fantastic 1-0 win against Australia on home soil. A 500 (Fijian) Dollars reward per player had also contributed somewhat to their motivation.

A single goal winning margin might not have felt sufficient in travelling to Australia for the return fixture, and ultimately the opposition got their revenge in winning 5-1, but at least the players and the management had done the country proud through that sensational first leg outcome. The 5-2 aggregate exit did not look too bad on paper in what had been the country’s only second ever World Cup qualification appearance.