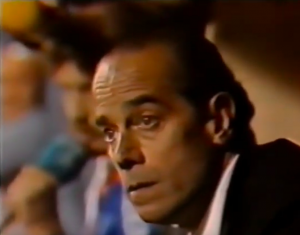 Spain had enjoyed reasonable success in their latest World Cup and were seeded in Group 6 of the European qualification. Where did they stand before their campaign for the 1990 World Cup?

While the period under Miguel Muñoz (1982–1988) had seen two good tournaments in France 1984 and Mexico 1986, the team was criticised after a disappointing Euro 1988. Spain had looked static and dull, critics claimed. There was perhaps also a sense that the older generation needed to step down and pave way for a rejuvenation of the team, as all the remaining veterans in the team, Camacho, Víctor, Gallego and Gordillo, retired from international duties in the wake of the tournament. More importantly, Muñoz stepped down.

Among the candidates in the frame for the position were mentioned Javier Clemente (Espanyol), Vicente Miera (Oviedo) and Luis Aragonés, as well as Luis Suárez (Spain U21).

On Thursday 18 August 1988, Luis Suárez was appointed new manager of Spain’s national team. He had been coaching the U21s since 1980 (and was possibly involved in Spain’s staff during the 1988 Euros?), meaning he was well acquainted with almost every member of the squad, as they at some stage had been part of his U21 setup. Due to the retirements, his inherited squad was moreover one of the youngest in the UEFA qualification: Butragueño was now the most capped (35) player in the team, just ahead of goalkeeper Zubizarreta (34).

Two friendlies were scheduled before the campaign for Italia’90, both at home in Spain against Yugoslavia and Argentina. This double prelude suggested that Luis Suárez wants his team to play an attacking style of football with emphasis on quick, almost direct passing.

Luis Suárez made use of two different formations in these friendlies, the first an asymmetrical 4-3-3, the second a more orthodox 4-4-2. Change of formations is not uncommon in Spanish football, so this flexibility could be a strength for Luis Suárez’ team. If these preliminary matches are anything to go after, Luis Suárez will be looking to make small tactical adjustments in his formations to gain an advantage on his opponents.

In his pre-campaign, Luis Suárez experimented with moving Míchel (Real Madrid) into the role as a deep playmaker. In the 1988 Euro, Míchel had played in his natural wide right midfield position. Since then, Víctor as well as Gallego had retired from the national team, meaning that Luis Suárez was on the outlook for new options in central midfield. Spain are lacking in central midfield compared to the eminent players that other powerhouses in Europe can show to, and Luis Suárez had already experimented with formations that allowed him to take greater part in the central areas of the field.

Roberto (Barcelona) had never been a regular for Spain, but was given the chance now when Luis Suárez took over the reigns. Roberto had unusually been playing as a second-striker against Yugoslavia, and in a more orthodox central midfielder role versus Argentina. He is clearly someone Luis Suárez wants to accommodate in the team, and it will be interesting to see how that works out.

There was also the gifted Martín Vázquez (Real Madrid), who Luis Suárez appeared more careful to pair with one of the two others in central midfield, probably having defensive concerns in mind. Against Argentina, Martín Vázquez played on the right side of midfield, where he unfortunately didn’t look to be at his best. Where will he fit in Luis Suárez’ system?

After the retirement of Víctor, Luis Suárez had no clear ball winning midfielder in his team. He did however try out Patxi Salinas (Bilbao) in the first friendly. Another player in contention is Eusebio (Barcelona), who could play either in centre or right midfield.

Who will partner Butragueño?

Butragueño (Real Madrid) was an indispensable member of the team, and was now even promoted as captain. It is more uncertain who would join him: it looked to be either Bakero (Barcelona) or Julio Salinas (Barcelona). These two had obviously different qualities, Salinas being a tall striker with strong headers, Bakero a gifted schemer. In the background, Eloy (Valencia) was also an option.

On the left hand side, Txiki Beguiristain (Barcelona) started both against Yugoslavia and Argentina, and looked destined to start also against Rep. of Ireland, whether as a forward in 4-3-3 or regular wide player in 4-2-2.

But if Luis Suárez had many options in mind for midfield and attack, he looked more certain about the defensive tasks.

Zubizarreta had established himself as the undisputed number one in goal. Notably, Luis Suárez did mention to the press upon his appointment, in the context of who he would consider to include in his team, that he wouldn’t rule out a return for Arconada. There would be no return for him in the preliminary friendlies however. As Zubizarreta’s deputy, Luis Suárez preferred Ablanedo (Sporting Gijón) to Buyo (Real Madrid), who had been Spain’s number two in the 1988 Euros.

Spain had fielded a new and young central pairing in the 1988 Euros: the libero Andrinúa (Athl. Bilbao) and Manuel Sanchís (Real Madrid). The latter had an excellent tournament and had also been a vital figure in Luis Suárez U21 side. In a back four, the central pair would without doubt be these two. While if Luis Suárez chose a 5-3-2, he could for example field Andrinúa’s club mate Patxi Ferreira (Bilbao). Fringe names that were mentioned in this discussion were Górriz (Sociedad) and Ricardo Serna (Barcelona).

It was a lot harder to predict who would play as full-back in the opening match. Camacho had retired, and so had (by the looks of it) Tomas. The fact is that Spain had many options of similar quality: Chendo (Real Madrid) and Quique Flores (Valencia) at right back, Soler (Real Madrid), Jiménez (Sevilla) and Nando (Valencia) at left back, and finally López Rekarte (Barcelona) who could play at either side, were all fielded in the two friendlies prior to the qualification. It looked to be a completely open question who would get the nod on either side!

Friendly: Spain 1-2 Yugoslavia
14.09.88
Goal: Míchel
Line-up (4-3-3): Zubizarreta (Ablanedo 85) – Chendo, Andrinúa, Sanchís (Patxi Ferreira 85), Soler (Quique 61) – Patxi Salinas (Julio Salinas 60), Míchel, Martín Vázquez – Roberto, Butragueño (c) (Nando 61), Begiristain
After a relatively bright opening half hour, Spain faded, and although they could have claimed that they had deserved a share of the spoils, Yugoslavia appeared the better team going forward. It was a disappointing defeat in Luis Suárez’ first match in charge, and after the three European Championships defeats it was hardly what they had wanted to try and bring back some enthusiasm for the national team.