It had been snowing during the morning hours this day, but approaching kick-off, there were glimpses of sun on the Dublin sky this afternoon, with a breeze still cooling the air. The Republic of Ireland had got off a slow start to their 1990 World Cup qualification, but were now finished with their three toughest away fixtures. Spain had full score, but it wasn’t unlikely that they would need one or two more points to be confident of qualifying.

For the Irish, John Aldridge had declined the call-up due to personal reasons, after the Hillsborough disaster, happening only 11 days before this encounter. The three other Liverpool players involved that evening, Whelan, Houghton and Staunton, were all in the line-up. Staunton got the nod as Chris Morris, the regular right back, was recovering from an appendix surgery (Chris Hughton thus moving from right to left back).

Luis Suárez again opted for a 5-3-2 formation away from home. Spain missed Andrinúa, who had been one of their best performers so far. The Bilbao libero had been out with an injury since the beginning of April, and would be missing from action yet a few weeks. As expected, Manuel Sanchís took his position, with Serna and Górriz as man markers. On top, Manolo kept his place, as now perhaps was expected, instead of Bakero. Ablanedo had been the regular reserve ‘goalie at the start of campaign, but a long term injury sustained in January set him for the rest of season: this time his deputy was Ochotorena. 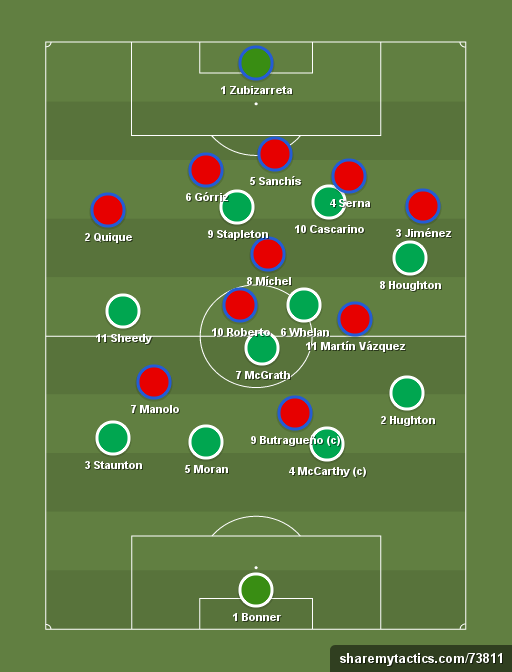 First half:
The weather had certainly made its impact on the surface, the rain and snowfall making it moisty and uneven. One also senses that it had been a while since the grass last time was cut: As Chris Hughton early on tried to drive forward with the ball in the spaces in front of him, he had a hard time to anticipate which way it would go. The condition of the surface was perhaps a slight advantage to the home side, given their style of play.

Ireland had been slow starters in this qualification, but they showed with all intent right from the start that they would go for it in this match. In familiar fashion, Ireland were putting Spain under pressure high up the field and tackling aggressively whenever their opposition had the ball. Adding to this a very high tempo of play, it had all the looks to be one of the most energetic efforts seen in the qualification so far; a true all-action performance.

The pattern of the Irish attacks was similar to that of the precedent matches: to target one of the strikers who would knock the ball down, preferrably to Ray Houghton on the right hand side. But whereas the target job had been done by Cascarino alone so far in the qualifiers, Ireland now had the luxury of choice by having two strikers that were capable in the air, in Stapleton and Cascarino. Both would mostly operate on the right side, to which the long balls anyway were addressed. Houghton looked busy from the very beginning and the two strikers were winning most of the long balls that came their way. Even though not a man marker, Spain could have made good use of influential libero Andrinúa in this match: the Bilbao defender usually excels with his towering headers.

It felt like the 1-0 goal had been well announced. A long ball hoofed upfield by Bonner found Cascarino, whose header Houghton ran onto; the crosser from Houghton evaded Houghton, but took Míchel by surprise, who sent the ball in his own goal. Textbook Irish attack, even though any of the Irish attackers yet again failed to score. Crucial to the build-up was Manuel Jiménez decision to help out Serna in the duel against Cascarino. When Cascarino still won the header, Houghton was released (and the Liverpool man also expertly evaded the challenge from libero Manuel Sanchís). Spain had crumbled under their fear for the Irish long balls.

It was a spirited performance by the Irish, probably even more so than in their previous matches. Tempo of play was as always high, but it didn’t really create a lot of chances. However, there was a constant pressure on Spain, ensuring that their opposition had a hard time to gain possession. Eire also did very well to stand high up the pitch, and they had clearly agreed not to allow Spain any possession on their own half if possible. Paul McGrath also did one of his best matches so far in the qualification: he doesn’t seem very mobile, but good at shielding the opposition and terrific in his tackles.

As in their last game against Hungary, there was a strong tendency for the Irish to use the right side – with the left side of the pitch left almost unused. As a result Sheedy would again suffer from inactivity compared to Houghton on the other side. This tendency was perhaps somewhat countered by Steve Staunton, who is a player with a good eye for passes, who would sometimes go against the team instructions and send passes down his left side. This is also what happened late on in the half, when Sheedy picked up a loose ball on his left side to cross it in front of goal: the busy Houghton was on the receiving end, but couldn’t hit it with power. Still, a good chance and a rare example of something created from that side and Sheedy.

As the report so far suggests, the Irish were the dominant side in the 1st half. Spain were clearly intimidated by their aggressive opponents, and seemed unable to string together a decent attack. The passing accuracy was poor (not helped by the uneven surface) and the hard working Irish team did an excellent job in giving them no time on the ball. Creative players like Roberto and Martín Vázquez hardly saw the ball, and Míchel was mostly forced to play sideways. There was a lot of battling in this half, and it was the Irish who overwhelmingly tended to win the ball in these duels. For the first time in this qualification the lack of a real ball winning midfielder in this Spanish side became apparent.

The two other goal scoring opportunities in this half both came from free-kicks. The first was a Whelan shot that was well curled around the wall and almost hit target. The second, which was Spain’s only proper chance created in this half, saw Martín Vázquez test Bonner from a long range: the Celtic ‘goalie for some reason moved a few metres out from his goal line, and couldn’t quite control the ball which had direction for the far post. The free-kick was by the way the result of a bad challenge by McCarthy on Manolo which Mr Brummeier gave a booking. The yellow card was perhaps harsh, and one senses that McCarthy still was fuming after an incident minutes earlier when Roberto set in a wild lunge on Moran without Mr. Brummeier giving anything more than a free-kick. Could well be that Mr Brummeier regretted and issued a booking for the next infringement he spotted…

Great Irish dominance in the 1st half, they were intimidating the Spaniards and created lots of problems with long balls and the energetic Houghton. Despite this they had, surprisingly perhaps, not created many goal scoring opportunities.

Second half:
The first 15 minutes of the 2nd half were probably some of the more exciting to watch in this qualification group. If not end to end action, the two teams were both willing to send men forward and it opened up spaces. Spain had regrouped after the break, and stood higher with their team. But it was mainly Ireland who still produced the most chances. As they didn’t have to rely on only long balls anymore, with Spain moving forward, this also saw Sheedy coming more into play. The inclusion of Steve Staunton in the side did certainly, as mentioned before, involve Sheedy more in the team, and he did well to set up a couple of good chances.

If there was one Irish worry despite their dominance, it was the failure of their attackers to score, let alone produce shots on goal. Even their goal had been an own goal by the opposition. As usual for Eire so far in the qualification, it was in the main the midfielders who were finishing off the Irish attacks (and very rarely the strikers), and McGrath had a glorious opportunity when his (tame) shot went just wide off the post. The same McGrath enjoyed an excellent game in his midfield role, destroying a number of Spanish attacks: not necessarily with tackles, but with his positioning and ability to anticipate the opposition’s movement.

Spain also managed to see more of the ball, with particularly Manolo and Martín Vázquez looking to involve themselves, the former with his movement off the ball and the latter as a schemer. It was however Míchel, so often forced into mistakes and sideway passes in the game, who created Spain’s best opportunity with a long ball from his own half that found Manolo in spaces in front of the Irish defence. Neither McCarthy nor Moran managed to pick him up, and he was allowed to fire a shot from 16 metres that nearly could have been a goal. Nice movement by Manolo, and a rare example of Míchel’s vision in this game. In comparison, Manolo’s striking partner Butragueño had a very quiet game.

Midway through the 2nd half, after they had failed to increase their lead, it look like Ireland would allow Spain take over the initiative and secure the 1-0 result. Charlton made a substitution, taking off Stapleton and replacing him with midfielder Andy Townsend. However, Townsend did not take place in midfield, but operated like a defensive forward, with his duty being to close down the ball playing Spaniards. Spain likewise did two substitutions shortly after: Eusebio replaced Quique on the right wing back, and Julio Salinas replaced the ineffectual Butragueño.

The last 20 minutes or so of the match were probably the least exciting of what had been a fairly good encounter. Spain were seemingly unable to create anything. Despite seeing more of the ball than in the 1st half, Spain were far from convincing in their attacking moves, and never threatened Packie Bonner except for the Manolo shot shortly after the break. The introduction of Julio Salinas didn’t really change anything in their approach either, and the Barcelona attacker was only taken notice of when he went into the referee’s book for a late challenge on Moran.

Conclusion
A great battling display by the Republic of Ireland. By putting pressure on Spain right from the start and playing a high tempo game with many long balls, they intimidated their opposition and managed to find the necessary goal. Houghton’s cross into the box was decisive, and the Liverpool man enjoyed a brilliant game on the right hand side, constantly moving in spaces and picking up knock-downs. Spain finally succumbed in their qualification: they didn’t deal with the long balls and were second best in the midfield battles. Míchel’s passing was sloppy and captain Butragueño taken well care of the Irish defence.