The third match in group 6 and also the third involving Northern Ireland. One point in Budapest would be a good result for the visitors, and Bingham opted for a defensive approach with Clarke as the lone striker in a 4-5-1 formation. Clarke had been used as a target player upfront against Rep. of Ireland, and he looked to play the same role here. Mezey usually plays with a packed central midfield (4-1-2-1-2), and to strengthen their midfield, Bingham deployed Mal Donaghy as a defensive midfielder in front of the central defence.

This was Hungary’s first match in the qualifers. Mezey relied on much the same group that he had brought with him to Mexico 1986. 9 of the 16 players in this match squad had also played at the last World Cup. Hungary lined up as expected, but missed experienced center half Antal Róth (Feyenoord), who would miss most of the qualification with injury. István Vincze was vying for a start, but it was Gyula Hajszán who got the nod.

Hungary surprisingly showed up in an all-white strip instead of their classic kit. Northern Ireland had only brought white socks, and needed to borrow Hungary’s traditional green socks. 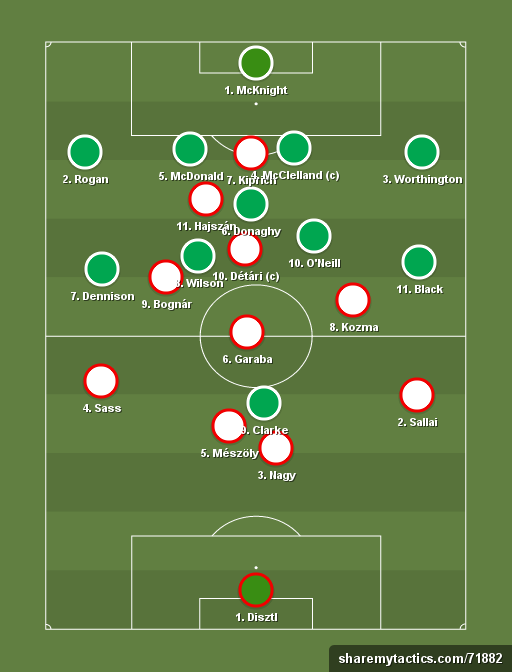 1st half
Bingham had opted to put an extra man in midfield for this game, moving Donaghy up from his right back position. Donaghy had a good game, and added more aggression to a midfield that might have looked a bit thin with only D. Wilson and O’Neill against a side that is good on the ball. The latter two would try to encircle the Hungarian players, before Donaghy set in a tackle. Through a disciplined effort and sitting very deep, the guests managed to defend their goal.

Mezey played with his usual diamond in midfield: Garaba was the holding midfielder, Détári the playmaker and Bognár the second playmaker. Kozma was the fourth player in this diamond, where he had a pretty quiet evening: not going forward, playing easy passes. With no natural wide midfielder, the formation can be narrow, and at times that was the case in this game. Still, especially Bognár was lively throughout the game, attacking from the deep with his technique and pace. Détári is of course usually the natural playmaker in this team and wasn’t man marked in particular, but he was overshadowed by Bognár in this game. While Détári was operating in the area which most crowded by the Ulstermen, they appeared to have given Bognár too much space in midfield.

Hungary had their chances, a few of them created by József Kiprich. The Tatabánya striker is the kind of player who can create things on his own when given the ball, and in the first half he often used his body strength and flair to wrestle away from the defenders on his back. Kiprich constantly looked dangerous when given the ball. The striker duo mostly operated on their own, with little or no co-operation. Still, Hajszán with his quick turns and dribbling skills also looked lively.

The Ulstermen were generally happy defending their own goal. Colin Clarke fought a heroic battle with marking defender Geza Mészöly as a lone striker. He would win the occasional long ball and lay it back to one of the midfielders. Although this worked sometimes, the Ulstermen never really looked like creating chances. The distance from the spot where Clarke won the ball to the goalmouth proved too far, as the players in green and white soon were crowded out. One of the better chances created was a cross from Danny Wilson, who always looks to make runs to the right side, which Diztl controlled.

A very one-sided match so far, with the Hungarians creating a few chances. It stood 0-0 at HT. 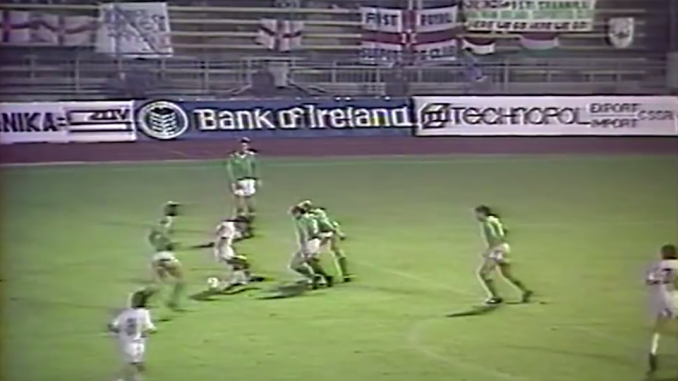 Above: Hajszán in what became familiar surroundings during this first half.

2nd half
Mezey made an interesting substitution at half time. He regarded Mészöly as surplus in defense and subbed him for László Dajka. Dajka is usually a midfielder, but here he was deployed as a striker. The formation changed to a 3-4-3. No doubt an attacking substitution. Mezey’s plan seems to have been to use Dajka to hold up the ball, play with his back towards goal and engage in combination play. Kiprich moved out to the right side of attack, Hajszán to the left. Nagy was now the only central defender, as Mezey sacrificed Mészöly (He would be helped out, when needed, by Garaba and Kozma).

What did Mezey seek by this tactical change? Probably to stretch out the Northern Irish defence and give some width to the Hungarian play. They had been excessively narrow in the first half, giving the guests too easy play by packing the central midfield. It could be said that this change worked to some degree, as it opened up a bit more space on the pitch. More worrying that key players Kiprich and Hajszán lost some of the momentum that had had in the game in the first half, as they now seemed to be stuck in wide positions. Dajka himself didn’t look to comfortable in his position either, for that sake. However, it was perhaps to the better for Détári and the lively Bognár who continued to roam in midfield.

It should have been 1-0 when Hungary were given a free-kick 9 minutes after the break. Détári’s shot hit the woodwork and bounced to Bognár, who had an open goal in front of him. Should be said that it wasn’t easy to control that ball, but Bognár probably should have scored. It was the second time in the qualification so far that Northern Ireland’s opposition missed on open target.

Kiprich was more quiet in the second half. He is a player who enjoys seekind wide on the right side, but didn’t look that comfortable in a three man attack. He did however contribute to another big chance when Détári sent a chip over the N. Irish defence and found Kiprich with a defender in his back: Kiprich laid the ball off to Hajszán who blasted it over. A nice move and one would have wanted to see Kiprich in that position a lot more.

It looked increasingly like Bingham’s defensive tactics had paid off. The Hungarians had been the better team, but had their chances restricted. The goal they had been searching for eventually came: substitute Vincze managed to create space for himself in the packed Northern Irish midfield and finished from distance. Hungary had tried for 85 minutes to open up that space, and it was Vincze who finally found it. The shot was well placed and McKnight’s vision probably wasn’t the best.

The Northern Irish comeback never happened and so Mezey could celebrate a good win over Bingham’s well organized team.

Conclusion
Hungary recorded a narrow win in a game that did not bring us a lot of goal scoring opportunities, but some interesting tactical choices.