Malawi had earned a good 1-1 draw away to Kenya in their first qualifier for Italia’90. Before the home match against Egypt, coach Reuben Malola made two changes: Mabvuto Lungu and Austin Nyondo were replaced by Charles Phiri and Holman Malunga. In addition, Donnex Gondwe was ruled out with injury. The Flames goalie was replaced by the at the time relatively unknown Ganizani Masiye (who himself would go on to have a long prolific career as goalkeeper for the national team).

Three changes for Egypt from their 2-0 win against Liberia two weeks earlier: Ahmed El-Kass, Hesham Yakan and Hashem Abdel-Rasoul replaced Alaa Mayoub, Ismail Youssef and Mohamed Ramadan. Midfielder Youssef sustained a serious injury during that match, with which he would struggle for much of the forthcoming year. Mayoub and Ramadan were named on the substitutes’ bench.

With no footage available from the Egypt v Liberia game, we are left with guesswork, but it appears that Mahmoud El-Gohary with these replacements changed the formation from 4-4-2 to a 5-4-1 system. 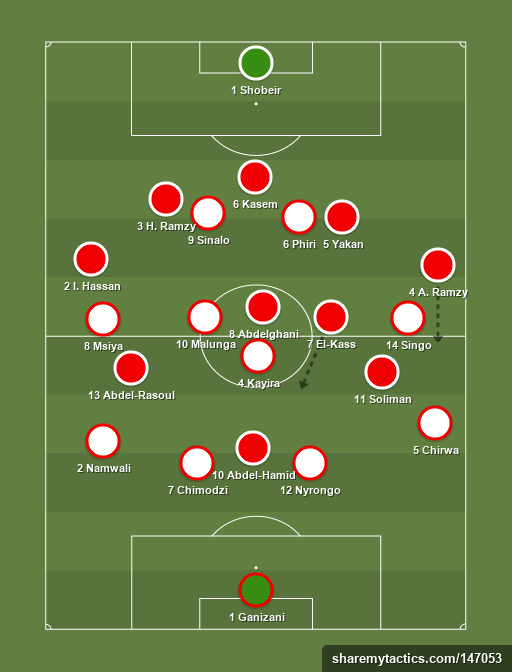 Two contrasting approaches here in Lilongwe, as Egypt wanted to play the ball on the ground, while Malawi resorted to a very direct style.

Malawi started the game nervously and found it hard to get a foothold in the game. Their defenders struggled to play accurate forward passes and their midfielders were unable to find any time on the ball. The direct approach seemed about the only right tactics. However, as El-Gohary had fielded a three man strong central defence that should deal rather comfortably with long ball tactics, the initial impression was that this direct style played the game right into the hands of the Egyptians.

Egypt were dominating midfield from the word ‘go’, and proved the only team able to keep the ball within the team. Abdelgany as usual provided the heartbeat of the side. Seemingly always in a position to receive the ball, he found the time to dictate the tempo of the game from his central midfield position. Malawi’s midfielders were not too interested in pressing him, and it did look in the early stages that Egypt not only were in control, but possibly could cruise to an easy win here.

Egypt struggling in the final third

After a half-promising start in which they established their dominance, it became evident that Egypt were having difficulties turning their possession into goalscoring opportunities.

Abdelgany’s problem was perhaps that he so rarely had passing options in front of him – Egypt were playing with a rather flat 5-4-1, and even striker Abdel-Hamid came deep to collect the ball. This could perhaps have given Egypt some momentum in building up attacks, but it didn’t quite work that way for them. The problem was not per se that Abdel-Hamid came deep, but the fact that there was no opposite movement from Egypt’s midfielders that could create any sort of mobility in the attacking move as such. More was expected here from El-Kass and Abdel-Rasoul especially.

For all of their dominance in the middle of the park, most of Egypt’s attacking movements ended with one of their players making a direct run at one or two Malawi defenders, eventually losing the ball or firing a shot from distance. Malawi’s midfielders fell deep to shield their defence, and were happy to let Abdelgany run the show from the centre of the field as long as Egypt struggled to pose much of a threat. Abdelgany was therefore given the time to play those incisive passes he is so known for, but there were too few options in front of him here for Egypt to exploit their dominance.

Thus, Egypt’s problem here was their lack of ideas in the final third. They were in control of the midfield area, but could not create the necessary openings.

One of the key features of this game, particularly in the 1st half, was Egypt’s crosses from the wide areas. It was evidently part of El-Gohary’s game plan to attack down the flanks and swing in crosses from the touch line. The movement of the two wing-backs, Ibrahaim Hassan (right) and Ahmed Ramzy (left) was crucial for Egypt to bring extra men into play, and Abdelgany was clearly intent on playing diagonals to the wide areas.

Where Egypt had very little penetration through the middle, they were highly successful in opening up Malawi down the flanks. Malawi found it difficult to pick up the two wing-backs. In particular on Egypt’s left hand side, where Ahmed Ramzy and Solimani enjoyed a good partnership. With some simple exchanges down the left, they overloaded Malawi again and again.

Solimani and Ahmed Ramzy swung in a high number of crosses, but the problem here proved to be the quality of these crosses, which generally was abject. In addition, Egypt lacked players inside the penalty area to receive the them. It didn’t matter how many crosses Egypt managed to drill into the penalty box: there wasn’t enough physical presence there to exploit any opportunity.

The 5-4-1 formation was bound to be a cautious one, and Egypt failed to provide much of an attacking threat for long spells of the game. This is perhaps also due to the nature of this Egypt team: solid defensively and rarely exciting going forward.

As Egypt spent the majority of the 1st half in possession of the ball without creating much to worry goalkeeper Masiye, Malawi gradually grew into the game, and surprisingly ended the half as perhaps the stronger side of the two.

They were largely unimaginative in their passing, Malawi, and hardly had an attacking move that counted more than 5 successive passes. They were not good in possession, not looking particularly bright when breaking forward either. Their playing style here against Egypt was all about direct balls against the two forwards, who are not particularly big either. But they are a spirited side and more than able to compete with Egypt for aerial balls, and battled bravely for loose balls and knock-downs (usually from the Egyptian central defenders out-jumping Sinalo and Phiri). The long ball game didn’t look particularly attractive, but it also seemed the only way that Malawi could put Egypt under some pressure.

The key man in Malawi’s best opportunities was however not one of the two strikers, but left midfielder Clifton Msiya. A big name in Malawi football folklore, Msiya seemed their only player able to do something on the ball and looked particularly dangerous when receiving the ball high up the pitch. He could go inside or outside and deliver dangerous crosses into the penalty area (much better than the ones we saw from Egypt) that troubled goalkeeper Shobeir, who showed himself to be hesitant at times. Egypt had less control on their right hand side, and Ibrahim Hassan was on some occasions put in difficult 1 v 1 situations against Msiya.

One change for Egypt at half-time: Tarik Solimani never entered the pitch for the 2nd half, being replaced by Khaled Eid (a direct replacement). Solimani did pick up a knock before the break, and it is quite possible that it prevented him from finishing the game. At the same time, some of his deliveries from the wide position had been of poor quality, and El-Gohary might have wanted a change of personnel.

59 minutes into the game, Egypt scored directly from a corner kick. Video of this incident gives no conclusive evidence of what happened, but apparently Abdel-Rasoul swung in a corner that went in at the near post. Malawi had otherwise been dominant in the air all evening inside the penalty box and defended crosses well, and there might have been a lapse in concentration or a misunderstanding involved here. 0-1.

Abdel-Rasoul otherwise had a quiet game, playing in a role where he apparently was expected to defend his right hand side without the ball and provide support for Abdel-Hamid up front when in possession. Like El-Kass, he didn’t seem comfortable in trying to balance defensive and attacking duties. The goal was one of his few positive involvements all evening.

When play resumed after the break, there had been early signs that Malawi wanted to keep the ball more in the team in the 2nd half.  Towering center back Young Chimodzie started to cross the midway line to take part in build-up play, and his presence surely improved Malawi’s ball retention, as Malunga and Kayira had showed themselves unable to hold on to the ball.

However, as soon as Malawi managed to restructure after conceding the goal, it was more or less back to the original tactics: hoisting long balls from the back in the direction of the two strikers, Sinalo and Phiri.

Egypt were looking comfortable after the goal, and also brought on Mohammed Ramadan for Abdel-Hamid, who had fought bravely upfront but with little support. As some point midway in the 2nd half, they were starting to look comfortable and exploited spaces conceded by a more and more stretched Malawian side, and had a few long shots that could have added to their lead.

However, as in the 1st half, Malawi managed to stage a revival in the last 10 minutes or so, and put Egypt under pressure.

While Malawi struggled to match their opponents in build-up play, it is evident that they were not inferior to Egypt in physical terms, and as the visitors gradually started to defend deeper in order to secure their lead, Malawi’s long ball tactics gradually became more threatening. Continuing to hoist the ball forward, Malawi were able to move more players ever higher up the pitch, which predictably increased the chances of picking up loose balls in danger areas. For the last 10 minutes or so, Egypt were laid siege to.

Malawi finally got their reward right at the end: As Egypt found themselves unable to bring the ball out of their own half, Malawi were given a succession of corners that Egypt failed to clear properly. In the end, a loose ball landed in the feet of midfielder Peterkins Kayira, who managed to get the ball over the goal line. Egyptian players protested that the ball had not crossed the line, but to no avail. 1-1. The goal was literally the last kick on the ball: Referee Hafidhi called full-time as soon as Egypt had taken their kick-off.

It’s very basic tactics from Malawi: Direct balls from the back in the direction of the two forwards, and not much else. They were struggling for large parts of the game to get a foothold, but  came back well both in the 1st and 2nd half. Clifton Msiya provided some necessary creative sparks, but otherwise this was as basic as it gets.

Egypt overall showed more quality on the ball, but rarely threatened the inexperienced Malawi goalkeeper Ganizani. They had plenty of possession through playmaker Abdelgany and overloaded the Malawi full-backs again and again, but with little threat in the final third. Striker Abdelhamid received little support from the attacking midfielders.

A draw reflected the balance in a game mostly bereft of footballing quality.