Portuguese keep up the chase with another necessary away win

For a second successive home match, Luxembourg would be playing abroad: They had played in Lille with Belgium the visitors in June, and this time around they had crossed the border to West Germany to play in Saarbrücken. Their Stade Municipal in the capital of Luxembourg was being rebuilt, a process which had already been going on for quite some time.

Portugal were facing their fourth successive away qualifier, and with no other matches played in Group 7 inbetween, it did seem quite an extraordinary fact. So far they had lost in Belgium and in Czechoslovakia, so their 2-1 win in Switzerland had been highly necessary. And it was expected of them that they would gain a relatively comfortable win against the group’s whipping boys too, even if they had made hard work of Luxembourg in their home tie eleven months earlier. Luxembourg will have been under few illusions about escaping with much, and their three previous home matches had resulted in 1-11 and obviously no points, to add to their losses in Portugal and in Czechoslovakia.

Luxembourg team news
Without having a large pool to select players from, Luxembourg manager Paul Philipp would usually have to make do with what he had already tried. Being part-timers playing on the international scene could sometimes be a harrowing experience, but judging from their point of view, it had to be said they coped reasonably well. Luxembourg were hardly an attractive opponent for friendlies, and so they had not been in action at all since the 5-0 home defeat by Belgium in early June. This time around they would at least have their greatest asset back: midfield man Guy Hellers had missed the match against the Belgians. For the first time since the 2-0 home defeat against Czechoslovakia early in the qualification, they would have both Hellers and speedy forward Robby Langers available at the same time. However, there was no Pierre Petry at the back this time around, and also no Hubert Meunier, who had captained the side in their five first qualifiers. Skipper this time around would be the experienced Carlo Weis, who would also take over Petry’s libero duties. Weis was back in Luxembourg again after a season playing lower league football in France with Thionville.

There was also a first time start since they begun their qualification campaign for Italy ’90 for midfielder Jeff Saibene, who plied his trade with Aarau in the Swiss top flight. However, Saibene was only a peripheral figure with his club side. Also into the squad for the first time since the start of the qualification came young wide midfielder Joël Groff and experienced striker Jeannot Reiter. Groff would indeed be making his international debut. Regulars Jeitz and Scholten had been relegated to the substitutes’ bench, and there seemed to be an interesting turn-around in defence, with forward or left-sided player Théo Malget and midfielder Marc Birsens appearing with shirt numbers suggesting they started out in the backline. However, based on their next match, the one away to Belgium, it is highly likely that Philipp decided to make use of a 3-5-2 for the first time since the start of the qualifiers. This suggests Malget as a central defender along with Bossi, and with Birsens making up a central midfield three together with Hellers and Saibene.

Portugal team news
Portugal manager Juca was sweating after the 2-1 defeat in Prague, as their World Cup participation next year was now hanging by the thread. The decision to play with an extra man in defence had backfired, and he would bring Vítor Paneira back into the starting line-up for the trip to Luxembourg. The Benfica star had been the man paving the way for Sobrinho to feature as a third central defender. There was also a first start for Sporting forward José Lima, who had come on as a substitute in Czechoslovakia. There was no Paulo Futre available this time, and his left-sided role instead went to Benfica’s left-back António Veloso, who was pushed further up field as a result.

Behind him, at left-back, there was another Benfica player in António Fonseca, making his second international appearance and his first for Portugal during this qualification.  For the third successive qualifier, Frederico and Venâncio would form the central defensive partnership, and up front in the striker’s role Rui Águas would start again, like he had in Prague. Midfield man António André was a notable absentee having featured in their four previous qualifiers, being suspended after picking up two yellow cards in the qualification campaign.

Referee
Referee was John Purcell from the Republic of Ireland, a 40 year old who had made his debut on the international scene less than six months earlier, as he had overseen a 2-0 win for Sweden in Wales in a friendly. Oddly, the first encounter between these two had also had Irish officials, and indeed one of the linesmen, Michael Caulfield, had been in charge of the fixture in Porto. 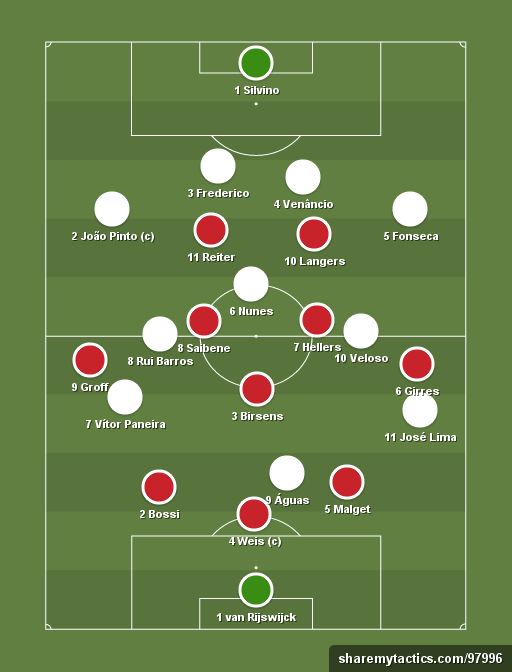 italia1990.com would like to emphasize that these suggestions are mere guess work based on other experiences with both of these teams throughout the qualifiers, as well as, in Portugal’s case, a couple of friendlies.

Luxembourg would be at 3-5-2 for their two final matches, and judging from the line-up, it seems highly likely that this was their first match in that formation for these qualifiers. The positioning of players such as Birsens (predominantly a midfielder, but with a cameo in central defence in the subsequent 1-1 draw in Belgium) and Malget (predominantly a forward) are educated guesses due to their shirt numbers and based on which players had been selected in the starting line-up. There’s still a chance manager Philipp had reversed their positions compared to what is suggested above, though.

As for the visitors, they would be seen in a 4-5-1 formation towards the end of the qualification. Juca had noticed how overloading his attack had back fired in the home match against Luxembourg, and so he could have opted for a more restricted approach this time around. With Fonseca coming into the team in the number 5 jersey, a shirt usually occupied by his Benfica team mate Veloso, it could be a possibility that the latter came into the central midfield three at left inside half. Sporting player Lima was an outright left winger.

italia1990.com do not have any footage to go on for this particular match, unfortunately.

Portugal’s comprehensive win completes Luxembourg’s home campaign, and the record of having played four and lost four comes as no great surprise. The goal difference of 1-14 is probably in the range of what could have been expected before the qualification started. It had taken Portugal all of 43 minutes to open the scoring, and Rui Águas’ goal had been his third in the national team jersey, indeed his third in his last three appearances. The Porto forward was in a rich vein of form. He would get a second just a few minutes into the second half, and when Rui Barros finally opened his Portugal account to make it 3-0 less than 20 minutes from time, Portugal had the margin of victory which had been expected of them, and which they had failed to fulfill in the home tie.

Portugal would hope for the Swiss to surprise everyone in Prague later in the month, as Czechoslovakia still held a great advantage over Portugal as far as goal difference was concerned. However, if Switzerland could capture a point from their trip to the Czechoslovakian capital, then all Portugal would need to do would be to defeat the Czechoslovakians in order to pip them for second place behind Belgium. If Czechoslovakia did what was expected from them, though, they would beat the Swiss and move to 11 points from seven matches, and thus being able even to afford defeat and still qualify when the teams came head to head in Lisbon on November 15, though goal difference could come into it.

The only booking of the contest had gone to Portugal defender Federico Rosa just after the hour. He would still be available for the journey to Czechoslovakia next month, though, as he was previously unbooked in the qualification.

Table read thus at the end of the day: