Corners give Spain the win

Northern Ireland would soon need a result after a somewhat disappointing start to the Italia’90 campaign. They had now gone 3 matches in a row without scoring, picking up only 1 point (home to Rep. of Ireland). This perhaps also explains some of the changes in Bingham’s team, with regulars O’Neill and Clarke finding themselves on the bench. Lawrie Sanchez was a first team player in one of the better clubs in the English 1st Division, but had seen little international recognition. As N. Ireland were losing hope of qualifying, Sanchez was finally called up and got his 2nd cap. Defensive woes for Bingham: Alan McDonald was suspended after two bookings – Donaghy took his place in central defence. Worthington appears to have been injured. This prompted Bingham to move Rogan over to the left and give Ramsey (3rd choice right back) his first minutes in the qualification. Ramsey had played all of Leicester’s six last games, albeit in midfield. Norman Whiteside was still unavailable due to a long term injury.

Although their Northern Irish ghost appeared to have vanished for good with the hammering win in Seville before Christmas, Luis Suárez still chose a defensive formation for the two teams’ next encounter in Belfast. Bakero finally made his first match in these qualifiers. The Barcelona man had picked up several minor injuries this season and only now was available to play. Manuel Sanchís was suspended after his red card in Valletta, and in came, much as expected, Górriz and Serna. With regular right back Quique Flores injured, Chendo (who probably had been expected to make this position his own after the 1988 Euro) was recalled. Picking a 5-3-2 formation, Luis Suárez left out Begiristain, who had acted as a third punta in Malta. Some new faces on the bench: reserve goalie Ablanedo was recovering from surgery, in came Biurrun. Young Fernando Hierro of Valladolid also made up the numbers on the bench. 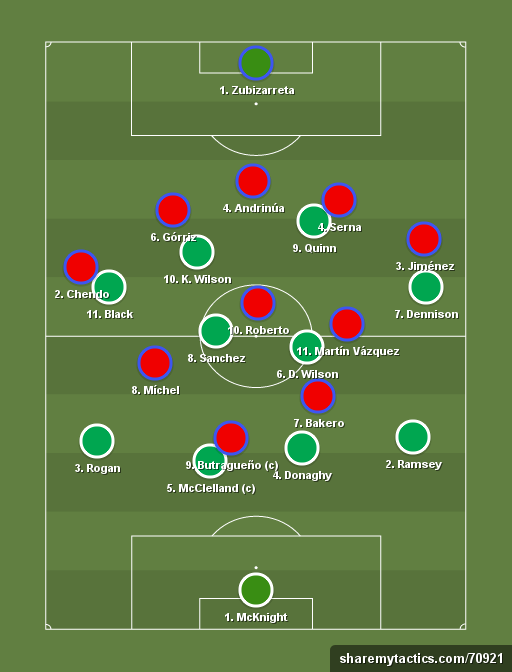 Spanish football is usually associated with many things: in this match they showed their attacking strength in set pieces, scoring both their goals from corners.

First half:
The 1st goal came already in the 3rd minute of play and proved decisive for how this game developed. A failed pass by Míchel had by chance come off Rogan’s shin (according to referee Mr. Pauly anyway), and the following corner would be swung in by Míchel himself. The goal was a majestic, towering header from libero Andrinúa, who really has showed what a capacity he is in the air during these qualifiers. A fantastic goal.

After this early goal, Spain were more than happy to sit back for the rest of the game. As expected, this would sooner or later give good counterattacking opportunities when they won back the ball from NIR, but Spain were very reluctant about sending players forward. It was a cautious approach by Luis Suárez. Usually in this first half, Butragueño and Bakero would be all alone in these counterattacks, with no or little support from behind. The very experienced centre half duo Donaghy and McClelland did quite well to stop the two Spanish forwards. Therefore, Spain were too cautious to really exploit this opportunity.

The tactical novelty of this game was the new Spanish midfield constellation. Suárez had previously arranged Míchel as the deep-lying player, but here the Real Madrid man was placed in right-centre midfield. Roberto now took the deepest position, with Martín Vázquez on the left-centre. Not easy to tell why. Was it another defensive move? But there is not too much difference between Míchel and Roberto in that department. Did he want to get more out of Míchel’s forward runs? Seems more likely: at least this position would give Míchel more licence to roam forward and give Spain more options when the rest of their tactics was very defensive minded. It was also Míchel who finished Spain’s only other chance in the 1st half, when he came surging forward to receive the ball from Butragueño, who had made a brilliant sideway run with the ball. Míchel appeared to stumble in his own feet and wasted a good chance, but just the run itself showed the good use Spain could have of Míchel’s initiatives from midfield.

Spain were sitting back, and on the other side, Northern Ireland were still struggling to score, let alone create chances. They hadn’t scored since the 1st half against Malta last May and the first 30 minutes didn’t look too positive either. Bingham’s men mostly chose the long ball, but this never really worked well in this match. The Spaniards had three defenders who were very capable in the air, and who even cleared the ball with some length, so the NIR midfielders failed to pick up the loose balls. The home side was unable to break down the well-organized Spanish team. True, there were maybe a few positives to be taken from the wing play, even though it didn’t result in more than a half-chance when Rogan got a crosser in.

The Ulstermen had their best spell in this game in the last 15 minutes of the 1st half, when they actually managed to pile some pressure on the guests. Finally two decent chances were produced, both on set-pieces. First the ball ended up in the feet of Lawrie Sanchez after a corner, but the Wimbledon man’s shot was tame. Then, Kevin Wilson headed a free-kick that was swung in and forced Zubizarreta into full stretch. Decent opportunities, not surprisingly from set pieces – but unfortunately for N. Ireland the best chances they would see all evening.

Second half:
N. Ireland were not able to build on the small momentum they had had in the last 15 minutes before the break. In truth, the second half only confirmed that their team was lacking in the attacking department.

Their long balls continued to be a disaster. With the ball, the NIR attacking players would too often show technical shortcomings against aggressive Spanish defenders. There was also little support from behind. The runs from Danny Wilson have been one of N. Ireland’s assets so far in the qualification, but this evening he was quiet. Both he and Sanchez were (rightfully) cautious about going forward as they had to keep an eye on the lethal Spanish midfield trio. Ramsey and especially Rogan made some attacking contributions, but showed that they aren’t particularly comfortable on the opposition’s half. As Northern Ireland played in the 2nd half, it looked as if they could kick the ball all night without getting close to a goal.

Spain were in control and inevitably got their chances to extend their lead on counter-attacks. The Spanish players were clearly instructed to get the ball forward with pace, and they hardly ever wanted possession. The three midfielders would rarely dwell on the ball between them, just quickly pass it in the direction of Butragueño and Bakero. Butragueño was rediscovering form and had a few nice runs on the ball, but McClelland and Donaghy generally did admirably to stop the attackers. Spain were still cautious, rarely sending forward more than one player (most often Míchel) to support Butragueño and Bakero. Their best chance came again by Míchel, who combined well with Eusebio on the right flank, shuttling into a very large space behind the high Northern Irish defensive line. A nice move, but his shot was parried by McKnight.

Bingham needed to do something. Midway through, the change came when he sent his presumably best striker, Clarke, on, moving Kevin Wilson back to midfield. Clarke was immediately presented with Northern Ireland’s best chance of the 2nd half, when the Spanish defenders maybe still were unsure what the swap meant. It really wasn’t a good scoring chance, just a shot from a narrow angle that Zubizarreta would have done terribly to let in if it hit the target. As soon as the Spanish defenders got an overview of the change, they kept Clarke and Quinn quiet the rest of the evening. More long balls followed, but were again taken well care of by Górriz, Serna and Andrinúa. They were also denied any more set-pieces, which they had shown some promise from in the 1st half.

Although he probably was happy with his team’s performance, Luis Suárez was not too happy with Mr Pauly, the West German referee. He had already got a warning in the 1st half when he complained about why his substitution of Eusebio for Chendo took so long. Shortly after Roberto’s booking, one could see Mr. Pauly walking with determination to the little chair which Luis Suárez was sitting on (apparently leaning towards the fence with the home crowd right behind him!) and sent him off. Not easy to say what had happened, but it might be that there was an ironic gesture after Jiménez was awarded a free-kick. Luis Suárez could at least not understand why, but started to leave the area. One of the few highlights in this half.

The presence of José Mari Bakero in the team will have got a lot of attention, since this was his first appearance in the Spanish campaign for Italia’90. It was, unfortunately, not one of his best matches for Spain. He was taken well care of by the N. Irish defence and looked less dangerous than Butragueño when he managed to control the ball. As usual he tried also to drop deep, but Spain’s direct play meant that little really happened in midfield in this game. One of the bizarre features of this encounter was the number of long balls played by Spain to the head of Bakero… The diminutive forward was often a target for the direct Spanish play, and for some reason in the air. Amazingly, he even won a few headers against his strong man markers. But in all in all, it was an ineffectual evening for Bakero, who was replaced with Manolo.

The game was a bit tense, but not a lot happened in front of the goals. Even though NIR gave Spain a good battle, they never looked like getting their equalizer. Instead, Spain added to their lead 5 minutes before full time on another corner. Míchel was again involved with the cross, and Manolo slided in to get Spain’s second goal.

Spain were cruising in Belfast and in their qualifying campaign. They had showed that they could be patient and resilient during the Northern Irish siege, although they didn’t exactly hit them very hard on the counter-attacks. A good win for Luis Suárez. Northern Ireland would face an upward struggle to get to Italia’90 now, and Billy Bingham must have wondered where his goals would come from after 4 matches in a row with hardly a chance created.