Three second half goals against put a dent in Cypriot belief

Cyprus had delievered a punch of massive proportions in their opening qualifier ten days earlier when they’d managed to hold France to a quite sensational 1-1 draw in Nicosia. This would’ve inspired them hugely ahead of a tie which they must have seen as winnable. The Norwegians had suffered two straight qualification defeats, as both Scotland (2-1 in Oslo) and France (1-0 in Paris) had overturned them. Furthermore, Norway had been in Italy for a friendly three days prior to Cyprus’ shock result against the French, and it had ended with another defeat for Ingvar Stadheim and his troops: 2-1 had been the final score in Pescara, albeit against strong opposition. Surely, loss again was not really an option for the Norwegians, despite Cyprus’ heroics last time around.

Since the match against the French, Cyprus manager Panikos Iakovou had only made three changes to the matchday squad of 16. The three players who had made way were midfielder Konstantinos Petsas, who had claimed his international debut on that occasion, playing out the full 90 minutes in a central midfield role. In for the 27 year old Omonia Nicosia man had come another 27 year old in Giorgos Savvidis from AEK Nea Filadelfeia of Athens. He was their only foreign based player.

Whilst Petsas had been the only player from the starting eleven last time out to make way, there were a further two changes among those who had appeared as substitutes: Neither Panikos Orfanidis nor Giannos Ioannou, who had come on late on to replace Evagoras Khristofi against the French, were anywhere to be seen, and in their place had come Marios Tsingis and Khristos Koliantris. Tsingos was the more experienced of the three who had come into the squad: The 29 year old from AEL Limassol had 22 caps to his name already, with the latest of these coming in the 1-0 defeat at home to Malta in a friendly just prior to the start of the qualification. However, even Savvidis had amassed 19 internationals through his participation in that very Malta fixture. Then there was Koliantris, whose debut had come that night in Limassol.

Cyprus had lined up in a deep 5-3-2 formation against France, and with the success they’d enjoyed then, the likelihood of a similar numbers combination and tactical approach should not be underestimated, even if they were up against an opponent of inferior quality to the French.

The Norwegians were already looking at their third match in the qualification, and with two losses from two thus far, nothing but a win was good enough if they were to have any impact on the group whatsoever.

Since the defeat in Paris, Norway had met Italy away just before Cyprus’ draw with France. They’d lost, as had been expected, but they’d given a decent account of themselves, even if it had taken a fine performance from their solid goalkeeper Erik Thorstvedt to keep the Italians at bay on a number of occasions. With the start of Ingvar Stadheim’s reign hardly flowing over of impressive results, they sure could need a boost from the trip to Limassol, even if it would be a trickier match than originally could’ve been expected, at least judging by the Cypriots’ performance and result against the French.

Since their previous qualifier, the 1-0 defeat against France in Paris there had been made five changes, but this squad of 16 did not differ that much from the one which had travelled to Pescara to face the Italians (although we have only been able to identify 15 Norwegians from that matchday squad). The most notable exception from the team which had lost Norway’s first away qualifier of the campaign was captain Anders Giske. He had picked up an injury late in the game at Parc des Princes, and partially as a result of that, he’d conceded the penalty which brought about the game’s sole goal. However, he had featured for his club side Nürnberg in their subsequent league game, a 4-1 home defeat at the hands of Hamburg, though in the wake of that result he’d not be back in Bundesliga action again until a 1-0 home win against Hannover on November 19.

Further omissions since France were fellow defenders Hans Hermann Henriksen and Erland Johnsen, as well as midfielder Ørjan Berg and striker Jan Åge Fjørtoft, the latter who had notched against Scotland. Players such as energetic Rosenborg full-back Karl-Petter Løken, Borussia Mönchengladbach defender Kai Erik Herlovsen and young, domestic based striker Simen Agdestein had arrived in the squad for the friendly in Italy, and since then regular back-up ‘keeper Ola By Rise was again reinstalled in the squad, having briefly surrendered his berth to Molde’s Thor André Olsen in Italy.

There had been a recall for seasoned Brann defender Per Egil Ahlsen, a 30 year old also capable of featuring in the heart of the midfield. He had no less than 35 internationals to his name. Another addition was Sweden-based full-back Per Edmund Mordt, a 23 year old who had featured heavily in Norway’s previous qualification campaign, that ahead of the 1988 European Championships. Mordt was already on 28 caps, despite his relatively modest age.
Greece based midfield playmaker Tom Sundby was expected to be out for a serious amount of time still following his injury inside the first minute against Scotland.

Stadheim appeared to be someone with a preference for 5-3-2, at least away from home, since they’d featured in 4-4-2 in their qualification opener against Scotland. The quality of the opposition probably also had a say in this regard. 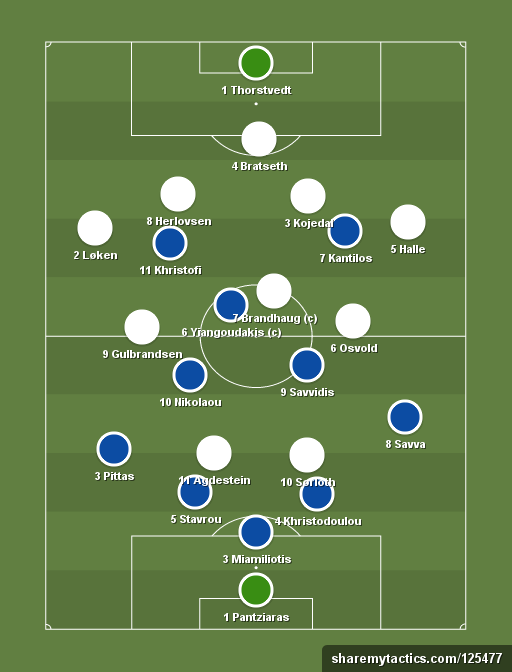 We emphasize that italia1990.com do not have any photo material from this game. Therefore, the tactics board is based on assumptions. However, we like to think that our assumptions are fairly correct, as in both sides’ respective matters they’d fielded almost identical line-ups only short time previously. The Cypriots had held France to a sensational 1-1 draw, and it appears very likely that they’d have opted for a similar tactical outlook against Norway, having enjoyed such success. The Norwegians had been in this formation and with this line-up in the recent 2-1 friendly defeat in Italy, and there’s unlikely to have been much in terms of tweaks.

Again, as we have no footage from this game, we have precious little to go on regarding how the game unfolded. However, we have been able to obtain some newspaper reports from a regional Norwegian newspaper (Stavanger Aftenblad), and they are reporting that the Cypriots were all over the Norwegians in the first half an hour. Norway ‘keeper Erik Thorstvedt had to make some saves to keep the score even, but as Cyprus failed to breach the deadlock, they would eventually grow frustrated, and their waves of attack relented.

Apparently, for the second half it was already a different matter, and by the time Norway striker Gøran Sørloth, who had recently been the hero as Rosenborg celebrated a domestic league and cup ‘double’ (he’d scored thrice in the Cup final when Rosenborg had defeated Brann 2-0 in a replay the previous Sunday, with the original fixture having ended 2-2 a week earlier), notched the opener, the valiant efforts of the home side turned into despair. Sørloth would strike again, before a late third was added through inside midfielder Kjetil Osvold.

Following two successive defeats so far in the qualification, this win must have been a massive morale booster to the Norwegian team, and likewise, it must have been a kick in the teeth to the Cypriots, who suddenly found themselves back on the all too familiar losing trail.

The said newspaper reports claim that (Stavanger born) Thorstvedt was indeed Norway’s man of the match with some crucial first half saves; were it not for those, Cyprus could’ve gained another creditable result.

We have no information about any bookings. As for substitutions, Cyprus had had to replace strong man-marker Giorgos Khristodoulou midway through the first half, something which would’ve been a blow to them, as he’d contained Daniel Xuereb (and also dealt efficiently with Stéphane Paille late on) in the France game. On had come Spyros Kastanas for his first minutes of the Italia ’90 qualification. In the second half, they’d withdrawn striker Andreas Kantilos for Hristos Koliantris, another who had not featured against the French.

In the away team ranks, manager Stadheim must have been growing increasingly content as the game wore on, and he opted not to make use of any of his five substitutes during the proceedings.

Unfortunately, with no video evidence from the game, we have nothing to base our usual ratings on.