Albania – Poland: Visitors restore some pride with fine away win 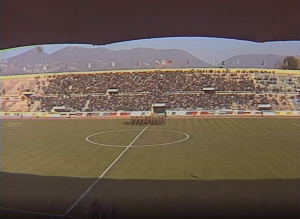 This is the final game of Group 2. All that was left for either team to play for was honour and prestige. The table read as follows prior to kick-off:

Whereas the home side would want to break their points duck in order not to end a second successive qualification campaign pointless, the visitors wanted to try and restore some of the people’s faith in the national team by winning their final match after a dismal qualification. Poland were playing their third qualifying match under Mr Strejlau, and had not managed to score against neither England nor Sweden in his two previous outings. He were to keep faith in much the same side which had taken to the pitch in both recent home matches, with the exception of forward K Warzycha, who had hardly been brilliant in national team colours of late, and midfielder Nawrocki. Śląsk Wrocław man Szewczyk came in to replace K Warzycha, whilst right-sided defender Kubicki took over for Nawrocki. There is scant information about this match on record, so a formation has to be guessed at. italia1990.com makes an educated guess that Szewczyk took over for Nawrocki in central midfield. Left-sided defender or centre half Wdowczyk continued as captain, and he was indeed the only Polish player of the 27 they had used who started all of their six qualifying matches. He was not considered an ‘ever-present’, as he had been substituted in the away match in Sweden due to injury.

Home manager Rreli was without three players who had been regular features in the qualification’s five first matches: defender Lekbello, defender/midfielder Gega, and wide midfielder Millo. They were also without goalkeeper Mersini, who would have started his fifth out of six had he been present here. However, there were so far ever-presents in sweeper (and now captain) Hodja, left-back Jera and midfield schemer Demollari. They were all in tonight’s starting eleven. So too was right-back Zmijani, who featured for the fifth successive qualifier, and who had been one of their better performers, although perhaps slightly less consistent than players such as Hodja and Demollari. There was also no Shehu in the squad, so this meant a second successive start for Kushta, who had scored Albania’s goal in the 3-1 defeat in Stockholm. Minga, the attacking midfielder who had been captain in the Albanians’ first three qualification matches, was again nowhere to be seen. Mr Rreli had favoured a 5-4-1 formation throughout, but he did seem to opt for two starting strikers here like they had done in the 5-0 defeat at Wembley, as both Kushta and Bubeqi were seen from kick-off.

This was the ninth meeting between the two countries. Poland had won the home fixture 1-0, and had a 4-3-1 record from their previous encounters. Albania’s only win had come in a friendly on home territory back in 1953.

Referee was 46 year old Scotsman George Smith. This was his seventh international match since his debut in Wales in 1982. He had not officiated either country previously. 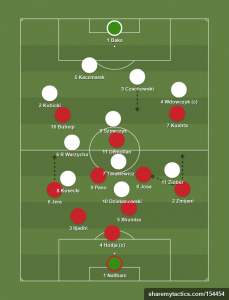 So far, italia1990.com have been unable to find information about the progress and dynamics of this particular match. Any assistance would be greatly appreciated.

The only visuals available from this game are the goals via Youtube. The visitors strike right before the half-time break as they move in front courtesy of a messy finish from midfielder Ryszard Tarasiewicz. The Switzerland based player notched for the second time in the current qualification, having earlier scored the Polish’ goal in the 2-1 defeat in Sweden.

There had been a sole substitution during the first half, which had been when striker Dariusz Dziekanowski had been replaced by Krzysztof Warzycha with just over 30 minutes gone. Having started all previous of their five qualifiers, the substitute would’ve been disappointed not to have started this game. His sole goal of the qualification had come in the 1-0 home win against the Albanians.

As for bookings, there were a total of three, neither of which would’ve influenced either player had there been further qualifiers in the wake of this one. Both for Roland Iliadhi and Agim Bubeqi of Albania, and for Roman Szewczyk with the visitors, it had been their first bookings of the qualification.

The Albanians had replaced midfielder Mirel Josa with Arben Arbëri on the hour, and just minutes later they pulled level when striker Sokol Kushta managed to poke home his second goal of the qualification. A further home substitution would occur with about a quarter of an hour remaining, when Ledio Pano had come off for Ilir Kepa. However, it was the visitors who would strike again, when winger Jacek Ziober was on hand to tuck home the rebound following Tarasiewicz’ free-kick onto the upright. It was Ziober’s second international goal in his 15th game for Poland.

The qualification concluded with a sixth straight defeat for the Albanians, who had, however, given a fairly decent account of themselves at home in Tirana, where they’d led against Sweden and also battled gallantly against the English. As for the Polish, it saw them round off the campaign with five points, something which ultimately must have been a big disappointment.