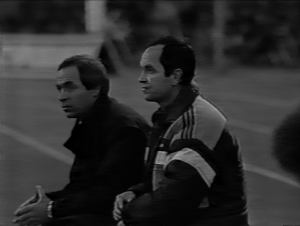 Although not favourites, Bulgaria were no doubt in the mix for progressing from Group 1 of the 1990 World Cup qualification. Bulgaria had last time qualified for the World Cup in 1986, when they had been eliminated in the 1/8 finals against hosts Mexico. Although maybe a bit underwhelming in the tournament itself, they had been very solid in the qualifiers that time around, and would again be a feared opponent.

Also the qualification campaign for the 1988 Euros under Hristo Mladenov had been decent, when they only were denied a place in the Euros by a late goal in the last match. They then finished just behind the Republic of Ireland, ahead of nations like Belgium and Scotland. Despite this respectable effort, Mladenov resigned as manager and left the managerial position open for the 1990 qualification.

Boris Angelov was appointed as his successor in early 1988. Angelov had been head coach for the Bulgarian U16 and U19 teams since 1983, and was now promoted by the Bulgarian FA to take over the reins of the senior national team. Angelov did otherwise not have a lot of experience as a manager, so this was perhaps a small gamble. But his start as a manager for Bulgaria A was in fact very impressive. During his first months in the position, spring 1988, he led the team to a win against Czechoslovakia, a draw against East Germany and a famous win against the imment European champions Netherlands. If there were any initial doubts about Angelov, they would probably be gone by now.

Assistant to Angelov was Ivan Kyuchukov, who at the start of the qualification was 42 years old. In his playing days, he had been a midfielder with Lokomotiv Plovdiv (in the 70s), though he had yet no particuar distinguishes as a coach or manager.

04.08.1988. Finland 1-1 Bulgaria
Goal: Europaeus (own goal)
Line-up (4-3-3): Valov – Dochev (Kiryakov 67), Rakov, Iliev (c), Vasev – Sadakov, Ivanov, Yordanov – Iskrenov (Pashev h-t), Penev (Kirov 67), Stoichkov (Aleksandrov h-t)
Bulgaria started their three match tour of the Nordic countries with a draw that suited the performance. They appeared slow early on, struggling to seize the initiative, but would dominate the hosts from the midway point of the first half until the break. They were slightly the better side also after the break, but had made the switch from 4-3-3 to 4-4-2 just prior to taking the lead through an own goal, something which would see them on the back foot for the rest of the game. They could have few complaints about Finland claiming a draw after notching an equalizer shortly after Bulgaria’s goal.

07.08.1988. Iceland 2-3 Bulgaria
Goals: Yordanov, Penev, Aleksandrov
Line-up (4-3-3): Valov – Dochev (Kiryakov h-t), Rakov, Iliev (c), Vasev – Sadakov, Ivanov (Kirov h-t), Yordanov – Iskrenov (Pashev h-t), Penev, Stoichkov (Aleksandrov 87)
Bulgaria were unchanged for their second match of the tour of the Nordics. The match was played at a wind-swept Laugardalsvöllur, and the home side would go into an early two goal lead, the second goal unfortunately guided into his own net by Ivanov. Midfield maestro Yordanov would get Bulgaria a goal back before half time, and in the second half their almost relentless pressure told. Penev scored the equalizer with a fine effort from the edge of the area, before three substitutes combined to seal the win as Kirov played Kiryakov down the wing for him to cross to the far post, where Aleksandrov headed home.

How about the squad? Which players were in contention? It had only been two years since Bulgaria took part in the 1986 World Cup, but their team already looked quite different. As it turned out, Boris Angelov probably wasn’t sure either which was his best XI and the turnover of players used during the qualification was quite big. The big news this autumn was that Bulgaria would have to do without Nasko Sirakov for their qualifiers. Sirakov wasn’t among Bulgaria’s best performers in the 1986 World Cup, but enjoyed a good qualification for the 1988 Euros. He had however sustained a serious injury briefly after his transfer to Zaragoza, in July 1988, and stayed out of contention for the entire 1988-89 season.

A few of the players that had been regulars in the Euro qualifiers were omitted from the Bulgarian team: left back Petar Petrov and midfielders Plamen Simeonov and Lachezar Tanev. Libero and former captain Georgi Dimitrov might have retired from international football after the failed 1988 qualifiers, although he did play one friendly under Angelov (v USSR reserves). Some new players were introduced with Angelov’s new regime. Particularly defenders: like Trifon Ivanov, Krasimir Bezinski, Pavel Dochev and Zapryan Rakov. Reliable midfielder Ayan Sadakov was still important in the team, as well as libero Nikolay Iliev and goalkeeper Borislav Mihaylov. The two young CFKA strikers Lubo Penev and Hristo Stoichkov had emerged during the 1988 qualifers and now looked certain starters.