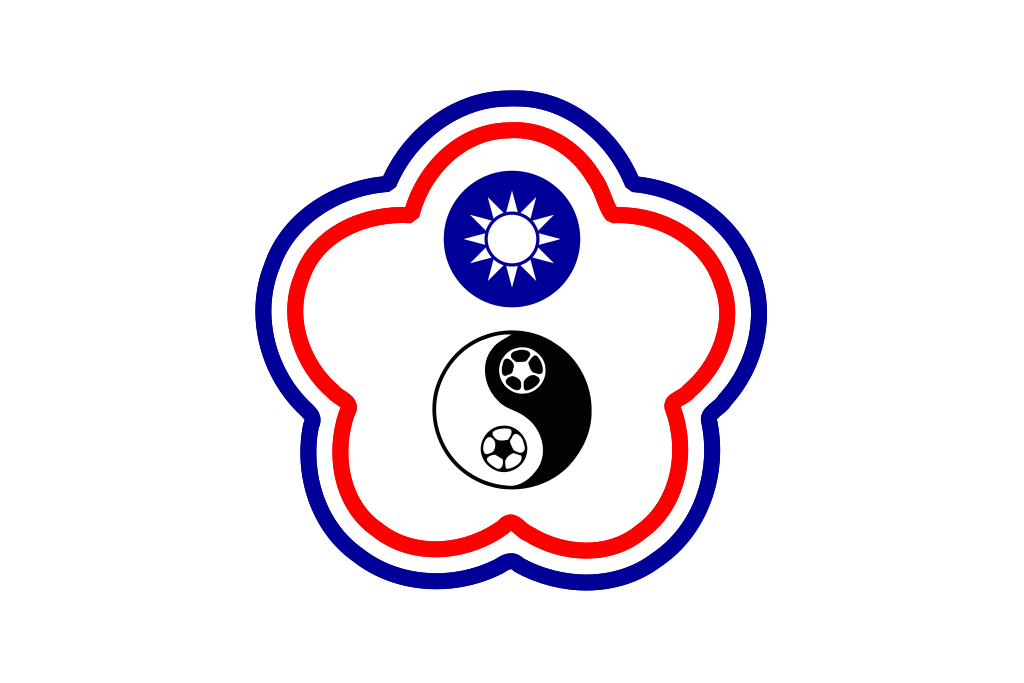 With both of New Zealand’s first round matches played out on home soil, the first of the pair was scheduled for a Sunday afternoon kick-off in capital Wellington. However, this was considered Chinese Taipei’s ‘home leg’. 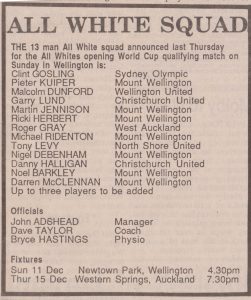 While the recent reappointment of John Adshead as the national team supremo had brought an immediate upsurge in the interest around the All Whites team, there was also a whole lot of curiousity regarding his first squad selection. Most people thought Chinese Taipei would represent a kind proposition to the new management, and that New Zealand would progress to the group stage, where they would be joining Israel and eternal rivals Australia. They’d met twice back in March, in Olympic Games qualifiers taking place in Australia and New Zealand, and though the accumulated score over the two games had ‘only’ been 3-0 against the team propping up the qualification group table, confidence appeared strong, without predictions stepping across the line and into a territory of nonchalance.

Very little was known about the Taiwanese outfit which had travelled to New Zealand for their two encounters with the Kiwis. They had arrived quite late in Wellington, and were even thought to be a little jet-lagged.

Their manager, Lo Jyh-Tson, had brought a squad of 18 players (as highlighted in their nations section). As we do not possess their line-ups from the Olympic Games football tournament qualification earlier in the year, we have little idea whether there had been much in terms of changing and chopping in their squad.

Initially, the returning Adshead had picked these 13 players for his 16 man matchday squad to face Taiwain in the ‘away’ leg, with a view to adding a further three:

Both Riley and Wright were born in England, and had only been granted a New Zealand citizenship in the days leading up to the start of the World Cup qualification. Once the paperwork came through, both were added to the squad. They had previously turned out for the All Whites, but only in friendlies, and on temporary citizenships.

From this total of 15 players, no less than eight hailed from Mount Wellington, the club which Adshead was managing on a daily basis. When his squad had initially been announced, it had brought some controversy, as a lot of ‘experts’ and people in general felt that a number of good players had been left out. Adshead had turned to his critics and said that ‘he only had a limited amount of time to make the national team gel together’, something which obviously was right, and so he had opted to pick nearly a full eleven from the club side which he knew best.

News which would’ve delighted the Kiwi football fans was surely the announcement that attacking star Wynton Rufer, Swiss based (and indeed with a Swiss father), would arrive back in the country in time for the second leg. Having finally sorted out his dispute with the New Zealand FA, over compensation for travelling arrangements from Europe, he would eventually team up with Adshead again. On this very Sunday, Dec 11, Rufer registered a hat-trick as his club team Grasshoppers won 3-0 against St Gallen, taking the 25 year old’s tally to 12 from 22 in the Swiss top flight.

After the domestic season had ended, Adshead had taken a group of players from Auckland, predominantly consisting of players from his Mount Wellington side, to China for a tournament, and while they had successfully negotiated their matches, it was also commented by their skipper Marty Jennison that ‘pitting themselves against Chinese opposition had given them an indication of what the two Taipei ties were going to be like’. Jennison had pointed out that they had typically played along the deck (“I only had two headers all tournament”), trying to walk the ball into the back of the net. Their pace had stood out, and they were expecting something similar from their two first round qualification fixtures.

42 year old Australian Chris Bambridge had been placed in charge of the game. He’d refereed internationally since 1980, when he’d officiated in two Oceania Cup ties, both including New Zealand.

Bambridge’ first World Cup qualifier had come in 1985, when he’d overseen a 5-1 win for New Zealand against today’s opponents. In 1986, he’d been selected for the World Cup in Mexico, where his one refereeing task had been the group stage fixture between Spain and Brazil.

Less than three months prior to this qualifier, he’d been the man in the middle for the group stage game in the Olympics between South Korea and Argentina.

This was the fourth successive World Cup qualification in which New Zealand and Chinese Taipei had crossed paths. The six previous meetings had resulted in five Kiwi wins and a solitary draw, which had been when they’d played 0-0 in Taipei ahead of the ’82 tournament in Spain, which had been the All Whites’ only representation at the global stage.

Ahead of the ’86 tournament in Mexico, both fixtures between the pair had been played out in New Zealand, just like this time around. The hosts had won 5-1 and 5-0.

Olympic Games qualifiers are not part of this equation. Thus, the two New Zealand wins from back in March didn’t ‘count’ in this context.

The turn-out was impressive: Around 3,000 were out in force to observe John Adshead’s first game of his new tenure. Despite dull, blustery weather, those who had come made sure to be heard, and the game was even delayed for a few minutes due to long queues having formed outside the gates.

Three All Whites made their debuts: Mount Wellington captain and centre-back Marty Jennison, lively midfield schemer Tony Levy, as well as young full-back Michael Ridenton, who came in at left-back for former national team captain Malcolm Dunford, as the latter had failed to pass a late fitness-test on his calf muscle. In addition, English-born Chris Riley and Billy Wright started a telling game for the first time. The returning manager had picked an adventurous 4-3-3 formation for the occasion.

Darren McClennan struck the top of the crossbar on five minutes, having been fed by captain Ricki Herbert, the squad’s only remnant from the 1982 World Cup.

The ‘home’ side were looking to attack using their left hand channel, and were employing left-back Yao-Heng and skipper Sing-An, as well as forward Chin-Chung. Combined, they wanted to exploit the gaps left by Herbert’s desire to drive forward from his right-sided defensive position. It rarely proved successful. 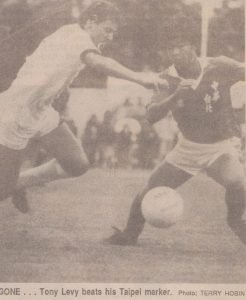 The New Zealand midfield trio had Riley sitting in the deeper role, offering his centre-backs some protection, and despite being an experienced campaigner, debutant centre half Jennison was visibly nervous in the opening stages. Riley’s presence would’ve been soothing. Danny Halligan was the box to box man, offering plenty of support coming forward, while Levy more or less worked in a right wing capacity. He’s described such that it suggests he is somewhat tactically raw.

Noel Barkley was a wide forward, not sticking to any particular side, but drifting from right to left and back. He set up fellow forward Wright for a goalbound attempt on 18 minutes, a shot which was saved away for a corner by Wen-Fong on his near post.

Halfway through the opening half, Chinese Taipei were culprits of missing a fine chance to go ahead. Midfielder Kuo-Ming chipped Chin-Chung through and in behind the Kiwis’ defensive line, but one on one with ‘keeper Clint Gosling, the forward completely lost his cool, and his wayward shot did not work the Australia based custodian.

There were further opportunities for McClennan, as he twice came close to opening the scoring, on 25 and 30 minutes respectively. However, the All Whites also needed a timely interception by Jennison to prevent Taiwan a chance to score just after McClennan’s attempt on the half hour. Jia-Leh and Kuo-Ming had combined to work out an opening, but luckily for the Kiwis, referee Bambridge saw no foul in Jennison’s tackle, despite the claims from the Taiwanese.

New Zealand score twice in the latter stages of the opening half, and it is a downward Wright header which sets them on their way eight minutes from the break. A Herbert cross from the right had seen Barkley challenge Chin-Hung for the ball to find its way to the English born striker. Then McClennan could finally claim his first goal at this level, when he pounced after Riley has had a shot blocked. McClennan’s goal was a sweetly struck half volley.

In the second half, deep midfielder Riley saw yellow for a rough challenge on Kuo-Ming, not long after McClennan had wasted yet another opportunity. On 57 minutes, New Zealand increased their lead, and this time it was Barkley who got his name on the scoresheet with a goal which had been rehearsed on the training ground. He’d rounded off a fine move with a firm volley from close range. 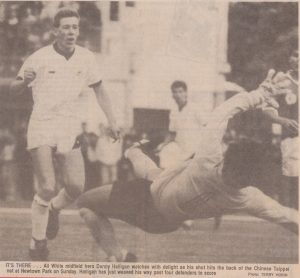 Yie-Cheng and I-Chiu had long range efforts, something which was a bit out of character for this neat-playing Taiwan side, the first of which Gosling tipped over, while the second came crashing back off the bar. The pair of shots from distance had come either side of New Zealand’s fourth goal, which came courtesy of strong-running midfielder Halligan. According to the report: “He dribbled his way past four defenders before smashing in a thrilling fourth goal on 76 minutes, evoking memories of Spurs’ ‘Ricky’ Villa against Man City in the 1981 FA Cup final.”

The Chinese Taipei side had been fairly mediocre, and that shot against the crossbar apart, they had not really threatened Gosling’s goal, lacking penetration in their play and looking lightweight up front. New Zealand had thoroughly deserved their win, and even the margin of victory was right. In fact, they could’ve added further goals. Nigel Debenham had replaced Riley and looked sound in the holding midfield role during the 18 minutes which he’d got on the pitch.

Summing up, these were the words from Adshead: “It’s just the start to awaken the New Zealand public that there is another winter sport!”