Having secured a 1-0 away win in the first leg in Cuba 15 days earlier, Guatemala would have to be considered favourites to progress through to the next round of World Cup qualification. Rather than their usual venue for home qualifying matches, the Guatemalan FA had opted to play this tie away from the capital, with the town of San Marcos, some 150 miles away from City of Guatemala, stageing the tie.

Retrieving information for this particular fixture is a tricky task. Based on available information from the first encounter in Havana, the Guatemalan team, at least its starting eleven, is identical with what was seen there.

44 year old Julio Salas, representing the United States, although he was born in Peru, was one of seven US referees in 1988 and 1989 on the FIFA list. He had moved from Lima to America as a 19 year old in 1962, and was a General Electric employee.

This was the fifth time altogether that the two countries had been paired, although they had never previously crossed paths in World Cup qualification. The first leg a fortnight earlier had been their inaugural such encounter, and Guatemala had come away from the Caribbean island with a 1-0 win. That had been their first meeting in 27 years, when Guatemala had won 2-0 in a CCCF championship fixture in Costa Rica. 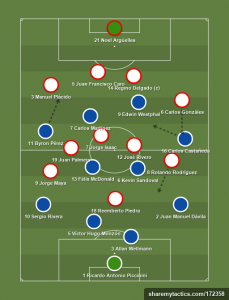