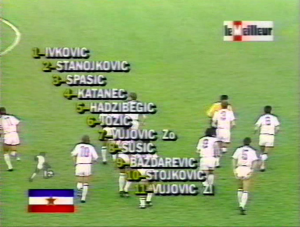 Yugoslavia were certainly among the stronger third seeds in the UEFA zone, and it had been the other Group 5 teams’ bad fortune that Ivica Osim’s troops had ended up there. They had featured in two international tournaments at the start of the 80s, although they had ultimately failed to deliever much in either of the ’82 World Cup or the ’84 European Championships, failing to get past the group stages on either occasion.

In qualification ahead of the 1988 European Championships, Yugoslavia had shown a great deal of promise, but they’d finished well beaten by England. It had been Osim’s first qualification in charge of the national team, and the now 47 year old former Željezničar manager and player for his country had gained valuable experience. He had a crop of delightfully talented players at his disposal, and so Yugoslavia surely would be there or thereabouts come late 1989.

With restrictions on Yugoslav players somewhat more lenient than that of other Eastern European countries, quite a few of them had already well prior to this qualification sealed moves abroad. And not infrequently would their players seek towards France, where for example seasoned twins Zoran (defender) and Zlatko (forward) Vujović were plying their trade with Bordeaux, although they were about to be separated, with Zlatko moving to the south coast to play the 1988/89 season for Cannes. The pair had been instrumental in Bordeaux’ double-winning 1986/87 season.

Other players abroad were defender Marko Elsner with Nice, midfielder Milan Janković at Anderlecht in Belgium, having been transferred from Real Madrid, experienced campaigners Faruk Hadžibegić and Mehmed Baždarević at Sochaux, as well as Austria based goalkeeper Tomislav Ivković. It also remained to be seen whether the super experienced Safet Sušić, aged 33 by the time the qualification started, would play his part. The Paris Saint-Germain midfielder had not featured for the national team since the 1984 European Championships.

Domestically, Red Star of Belgrade were reigning champions. Among their players was special midfield man Dragan Stojković, a 23 year old who had featured already during the 1984 European Championships, and who carried a certain influence on the team already at this relatively early stage in his career. Other fine players were spread around the country, too, and it remained to be seen who would blossom on the big stage.

Under the tutorship of Mirko Jozić, Yugoslavia had won the 1987 Youth World Championship in Chile. There had been some truly talented players among the 18 they’d brought to South America, where midfielders Zvonimir Boban and Robert Prosinečki, as well as forwards Predrag Mijatović and Davor Šuker, had perhaps been the most eye-catching. Even if they all featured for their respective first teams domestically, it could be too early for them to already progress through to the full international squad.

Yugoslavia would be one of five UEFA representants during the 1988 Olympic football tournament in South Korea, and they would go there with a relatively sound squad, “Piksi” Stojković being their headliner. However, at full international level, Osim’s first couple of tasks ahead of the qualification were negotiating friendlies away to Switzerland and Spain respectively.

Report: Yugoslavia at the Seoul Olympics