Which players were in contention for a place in West Germany’s line-up against Finland, 31 August 1988? 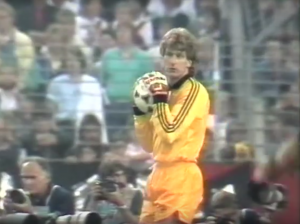 Eike Immel (Stuttgart) had been the first team choice since 1987, and it was expected that he would keep his place for the team’s qualification opener against Finland. Beckenbauer had however declared that he would make a new evaluation of the goalkeeper situation after the 1988 Euros, opening up the possibility for a change. Young Bodo Illgner (1 FC Köln) had been his understudy in the squad for the European Championship, and another inexperienced contender was Andreas Köpke (Nürnberg). 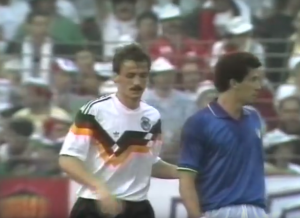 Beckenbauer was expected to line up his team in a 5-3-2WB formation. There could be no discussion about the two man-marking defenders, who with all probability would be Jürgen Kohler (1. FC Köln) and Guido Buchwald (Stuttgart). In case Kohler and Buchwald were unavailable, Beckenbauer would probably look to Hansi Pflügler (Bayern München) or the versatile Uli Borowka (Werder Bremen), if not Thomas Berthold (Hellas Verona), who was perhaps the best option, but more likely to play as a wing back.

More crucially, Beckenbauer was looking to replace Matthias Herget (Uerdingen), who had been the national team’s more or less regular libero since 1983. He would approach 35 in 1990, and there was time for a change. Herget had been a libero of the Beckenbauer mould, impressing with his vision and understanding of the game, although occasional lapses and a penchant for risk also had given him the nickname Bruder Leichtfuß. Who would replace Herget? Was it time for Klaus Augenthaler (Bayern München) to return to the national team, having not been capped since 1986? While seemingly a natural option, Beckenbauer was not so keen on this idea: Augenthaler stood for a more conservative interpretation of the libero position, and it was expected that der Kaiser would look for a player of a more attacking mould (perhaps in part due to the demands of more attacking-minded football from the public). This left Beckenbauer with no obvious replacement for Herget. One option for this vital position in the team was un-capped Gunnar Sauer, who had been instrumental for Werder Bremen in their title-winning campaign. Herget’s team mate Holger Fach (Uerdingen) and Manfred Binz (Eintracht Frankfurt) would have to be considered surprise inclusions. 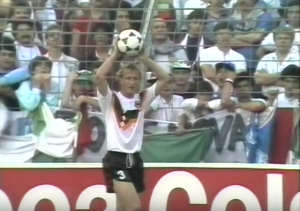 Beckenhauer had one of the finest wing backs around in Andreas Brehme (Internazionale). Brehme could operate both on the right and left wing back, making him somewhat of a dream for any manager. With Berthold being the best other full-back available, Brehme would usually slot in on the left hand side. Beckenbauer had other options in Pflügler, Michael Frontzeck (Gladbach) and Armin Görtz (1. FC Köln) for the left wing back, while Stefan Reuter (Bayern München) was the most likely deputy on the right hand side. 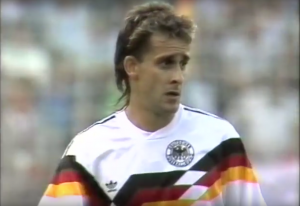 Beckenbauer would play a midfield trio with captain Lothar Matthäus in the deep position. In front of him, the most likely options were young Olaf Thon (Bayern München) and Pierre Littbarski (1. FC Köln), as in the 1988 Euros. Thon looked an exciting prospect, although still somewhat uneven in his performances (as seen during that summer’s tournament).

Great things were also expected by Hans Dorfner (Bayern München), who however was of a mould that best would fit in the position Matthäus was occupying in the team. Wolfram Wuttke (Kaiserslautern) was able to offer stunning performances at his best, being an unpredictable player Beckenbauer most likely would throw in as a sub, or even as a replacement for Littbarski. The latter’s team mate at 1. FC Köln, Thomas Häßler, was also in contention in the creative department of their midfield. There was also Wolfgang Rolff (Leverkusen) if Beckenbauer wished to add some steel and grit, or Günter Hermann (Werder Bremen).

Strikers
No doubt that Beckenbauer’s ideal pairing upfront was Rudi Völler (Roma) and Jürgen Klinsmann (Stuttgart). The hugely popular Völler had had a rather disappointing 87-88 season for Roma, and his place in the team had been questioned by West German media throughout the 1988 Euros, perhaps only saving himself by his two goals against Spain before West Germany crashed out of the tournament. His self-confidence was a record low.

The once agile and quick Frank Mill (Dortmund), now an ageing striker more relying on his cleverness, was the most likely replacement for these two. In fact, certain newspaper called for Beckenbauer to replace the disappointing Völler with Mill – would he listen to the cries of die bunte Blätter?

Dieter Eckstein (Nürnberg), a lightening quick striker, had been a part of the 1988 Euro squad, but would surely have to reckon himself behind Völler, Klinsmann and Mill in the hierarchy. New sensation Karl-Heinz Riedle (Werder Bremen) was another option, as was Thomas Allofs (1. FC Köln). Other figures in the frame were Fritz Walter (Stuttgart) and Roland Wohlfahrt (Bayern München), but arguably now we’re talking about domestic goalscorers that probably weren’t of an international standard.