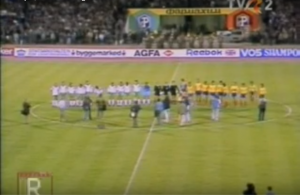 A much anticipated fixture between two neighbours would get the ball rolling in Group 1. On a blustery October evening in the Bulgarian capital, the locals had flocked to the stadium to cheer their men on. The huge Vasil Levski was party clad and packed to the rafters. This was to be Bulgaria and Romania’s first World Cup head to head since 1953.

After using a 5-3-2 formation in most of the friendlies, Angelov started out with 4-3-3 in this opening match of the 1990 World Cup qualification. His line-up had not been easy to predict, but it came as a small surprise to see experienced Plamen Nikolov take the right back spot instead of Iliyan Kiryakov. Another vastly experienced player who unexpectedly made the team was Plamen Getov, the playmaker of the 1986 World Cup team, who ever since had been out of the national team. Getov lined up in midfield together with Sadakov and Yordanov, making this a central area rather similar to that of the 1986 team. The team had an attacking outlook with three strikers, as Alexandrov joined the CFKA duo of Penev and Stoichkov.

Jenei fielded three relatively new faces, who all had started in the friendly against Albania in september: Gheorghe Popescu, Ioan Sabău and Iosif Rotariu. None of them had played a competitive match for Romania before. Rotariu did however take place at left back, making way for Dorin Mateuț in wide left midfield (veteran Nicolae Ungureanu was placed on the bench). This was to be a standard line-up for Romania in the qualification for Italy’90.

Michał Listkiewicz of Poland had been appointed as referee for this game. He had recently officiated in the Olympics (Australia-Nigeria), and previously been referee in one World Cup qualifier (France-Luxembourg in 1985) and one Euro qualifier (USSR-Iceland in 1987). 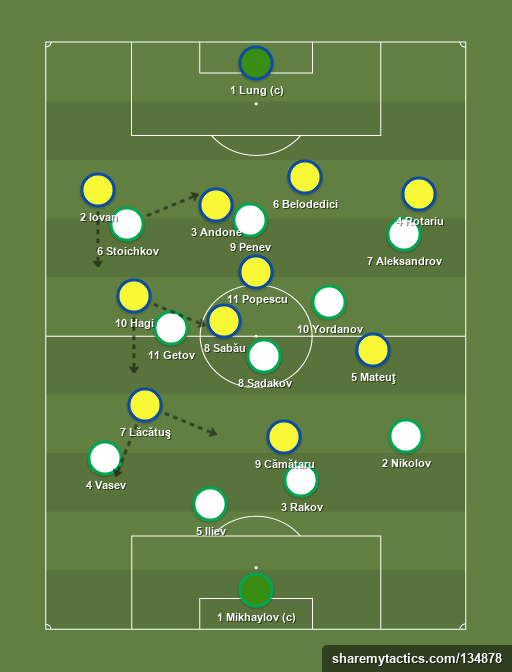 1st half
Both teams came to this match with an attacking mindset, and it was bound to be an open encounter from the word ‘go’.

It was the Bulgarians who enjoyed the better start, as they showed more aggression and initiative in the opening five minutes. In theory, they play 4-3-3 with Getov and Yordanov as the midfielders making driving runs forward on the ball, and with Stoichkov and Alexandrov offering width. Their left hand side would be by far the more dangerous one, seeing Yordanov combining well to advance forward and Stoichkov showing his acceleration and boldness. The right hand side didn’t work that well: Getov started to gravitate towards a congested central area, and Alexandrov didn’t seem comfortable in what wasn’t his natural position.

Romania were surprised with the hosts’ aggression, and a player like Popescu showed that he still was a freshman on the international stage, being the culprit of a few passing mistakes. But slowly the Romanians’ superior class began to show. Overall, Romania have many players with above average technical skills, who enjoy one-touch play and burst forward with pace, and there were spaces to exploit in this game. Romania have two particular strengths that make them an excellent side: 1) a central, deep zone full of vision and passing ability with Belodedici, Popescu and Hagi, and 2) an attacking minded right hand side with Iovan, Sabău and Lăcătuș (the latter drifing in the right-sided channels as a second striker). They are also one of the top counter-attacking sides in the European qualification zone, together with the Soviet Union and perhaps Portugal and Belgium.

As the half proceeded, these two main areas in Romania’s play came to their fore, creating the chances in the game. Their right flank was very active, with Romanian players (the three mentioned, but also Hagi) overloading Bulgarian left back Vasev. Still, Romania’s best chance before 1-0 was in fact created along the left: Rotariu (who doesn’t make attacking runs as often as Iovan, but often effectual when he does) came forward to provide Cămătaru with a cross for a header that only just went wide off the post.

Romania’s opening goal came after 25 minutes, and it was on the aforementioned right side that they found the goal. After several promising moves, 0-1 was created by the vision of Hagi and running of Iovan. It had of course not been possible, however, had Cămătaru not stepped over the ball. As is well known, Mateuț was having an incredible goal scoring spell in 1988: He would often lurk outside the area, showing a very good sense of positioning himself for shots on target. 1-0 to Romania.

Beside a strong right hand side, Romania’s play profited from the deep, central zone with its vision. Popescu and Hagi contributed heavily to the goal, but there is also libero Belodedici. Despite their aggressive pressing, the Bulgarians simply couldn’t close down all these creative players. Shortly after the goal, Belodedici played a long-range pass of more than 60 yards which sent Lacatus through on the Bulgarian goal. Lăcătuș couldn’t control the ball for what was a good chance to add to their lead. Still, one senses that Romania were looking a very capable side in their attacking department and the team more likely to score the next goal of the match.

In the 31st minute, Angelov made a substitution, replacing the ineffectual Aleksandrov for Hristo Kolev. This appears to have been a tactical substitution, with Kolev taking place on the right side of the Bulgarian midfield in a 4-4-2. The substitution proved immediately to be a lucky one, as Kolev after just one minute on field struck a free kick from 20 metres in goal. (It is worth noting that Stoichkov at this point was low down in the pecking order of Bulgarian free-kick takers. The main man was still veteran Plamen Getov, and Kolev was obviously also of higher rank.) The score was 1-1, Romania’s good work so far undone by a free-kick.

2nd half
The teams returned from tea with much the same intention as in the 1st half, attempting to find the winner in this match.

Stoichkov had moved into the centre after Angelov’s switch to 4-4-2, and with Romania committing men forward on 1-1, there must have been hope that Stoichkov in this position could use his burst of pace in the counter-attacking opportunities that would be presented. This is what happened shortly after the beginning of the half when Getov with a perfect through ball sent Stoichkov clear on goal, outpacing Iovan to place a shot as he was one on one with Lung. The goalkeeper did get a hand to the ball, the problem being that he had handled the ball outside his penalty box… He had evidently saved a goal, but in 1988 there was no card given for this offence, merely a free kick that Bulgaria squandered. Lucky Lung.

Bulgaria were committing a blatant tactical mistake in this match, sitting extremely low with their defensive line while their midfield was pressing the opposition. There were acres of space between defence and midfield, and so the area in front of the Bulgarian defence looked vulnerable throughout the game, and even more so in the 2nd half than before the break. There was no need at all to sit that deep with the defence, and both Angelov and Iliev, the libero and captain, can be questioned for this terrible adjustment.

So, as the Bulgarian midfield eagerly were closing down the deep-lying Popescu and Hagi, big spaces appeared between midfield and defense. Here, Romanian wide midfielders came to the fore, Sabău and Mateuț cutting inside to drive towards goal.  Sabău created a big chance as he was allowed to run with the ball all the way from his own half – his shot hit the post and bounced into the grateful Mihaylov’s gloves.

The Bulgarians did not have a lot to offer when attacking. In fact, they still looked more dangerous when given free-kicks, where Getov or Kolev would shoot from distance. More and more, they also retreated to their own half. This was probably wise, as they had to compress the space given to the Romanian players so far. It could possibly also have given some opportunities for counter-attacks, but they looked disappointingly lacking in that department of play this evening.

1-2. The goal showed some typical traits in this match: The Romanians simply looking more fluid and technically able in their play. Best examplified in the way that Hagi initiates the first attack, after a long build-up with Romanian defenders passing the ball around, by a sudden acceleration with the ball past a Bulgarian player. In the second wave Mateuț’s shot is saved, only for Cămătaru to score from the rebound.

With just ten minutes left for play, Bulgaria had to stand higher. This was when Stoichkov finally showed himself. First he had a shot from sharp angle and then produced another free-kick in a dangerous position (Getov’s shot saved). But instead of Bulgaria coming back in the match, it was Romania who deservedly got their third. It’s a counterattack, and this time only Hagi and Cămătaru behind the attack. 1-3.

Bulgaria had picked such an attacking starting eleven, and they would start the game brightly, having plenty of possession, though it would be the visitors who created the early opportunities, hitting the hosts on the counter. Romania had the players to take advantage of Bulgaria’s limited focus on defending. Their opening goal from attacking midfielder Mateuț was a text-book example. The goal prompted a swift Bulgarian substitution and formational switch, with Kolev coming on as a midfielder in a diamond-shaped 4-4-2. The early substitute for Aleksandrov would immediately strike home a magnificent free-kick for 1-1.

After the break, Bulgaria were clearly more balanced, but it came at a cost as they increasingly surrendered possession into the hands of their visitors. Romania, with all their richly talented ball players, would go on and close the game on the hosts, even though their final two goals, both through striker Cămătaru, would arrive late. The second came on the counter again, as Bulgaria were pressing in search of an equalizer. The small Romanian contingent in the vast stadium would celebrate two excellent points at the home of their rivals.