Holders Uruguay were making their first appearance in the 1989 Copa América against one of the less fancied sides of the tournament, Ecuador. This was also the opening match in Group B, and the early afternoon match played at Estádio Serra Dourada in Goiania, to be followed by Argentina-Chile in the same ground later that day.

The two teams had met as late as May, playing no less than two friendlies: Uruguay had won the fixture in Montevideo 3-1, while the “second leg” in Quito had ended a 1-1 draw.

Dušan Drašković had made no changes to the team that drew 1-1 in May, suggesting he may have found his ideal line-up.

Ecuador’s formation was not a conventional 4-4-2, but one with two central midfielders that were cautious about going forward and two wide players who possibly were more used with a clearer playmaker role (Aguinaga and Cuvi).

(Ecuador had however since also played in a minor competition in Port of Spain, the “Trinidad Soccer Bowl”, but line-ups from this competition are not available.)

One major absence for Uruguay, as captain Enzo Francescoli was not available. He served a two-match tournament suspension following the red card in the 1987 final against Chile. The same applied for holding midfielder José Perdomo. Tabárez kept faith with his 4-3-3 formation also without Francescoli, but needed to rely on a forward of a very different mould in his place, Carlos Aguilera. He is a player more similar to the two others, Alzamendi and Sosa, and their dynamics would be one of the question marks ahead of this game.

In midfield, Tabárez opted for Gabriel Correa instead of Ruben Pereira to the right in the midfield trio. Correa had only been a sub in their last friendly before the Copa, against Chile (2-2 in Montevideo), but had scored both of Uruguay’s goals there and must have been difficult to ignore before this opening match. 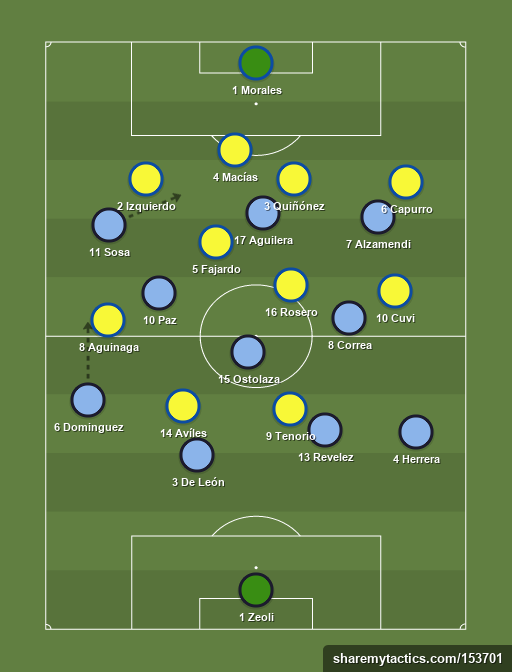 The absence of Francescoli (and the lack of a direct replacement) meant that there was increased responsibility on Ruben Paz when Uruguay were going forward.

Paz was arguably also the most influential player for Uruguay here. He expertly created triangles with left back Dominguez and left forward Sosa, and was driving the team forward with his invention. While Paz was the nodus of these combinations, much credit must be given to Dominguez for willingly shuttling forward down the line and to Sosa for finding the space to receive the ball.

Sosa was a constant threat, and right back Izguierdo had a hard time to anticipate the left forward’s movements. Sosa had the ability to come short to combine with Paz, to threaten behind Ecuador’s defensive line or to shoot from long distance. All in all, he was Uruguay’s most inventive player together with Paz.

(In contrast to Paz, both Ostolaza and Correa were rather unimaginative and slow in possession. Correa was clearly intent on playing diagonal balls in the direction of Sosa, but otherwise his and Ostolaza’s involvement in the build-up was minimal, and restricted to defensive responsibilities. Paz remained the main link between attack and midfield.)

Beside the invention of Paz, another characteristic of Uruguay’s game plan was the focus on direct passing. With Carlos Aguilera playing on top instead of Francescoli, they had three forwards able to run in behind the defence. Uruguay’s players had clearly been instructed to attempt the long ball whenever there was a chance to hit Ecuador on the break, hoping they could exploit any lack of balance in Ecuador’s defence by challenging them for pace.

One of these haphazard long balls also saw Aguilera given the best chance for Uruguay in the 1st half, but otherwise there were are number of unsuccessful attempts.

Some of the feel of the game changed toward the end of the 1st half: While Uruguay had the upper hand, Ecuador more and more started to make inroads.

Ecuador were focused on turnovers. There was much energy and pace upfront through Benítez and Avíles, but also the ability among the midfielders to pick some incisive passes from the deep in their direction.

Drašković’s midfield is a strange composition, with two playmaker types in the wide positions, and two central midfielders of which neither are classic holding midfielders: Fajardo is a regista, Rosero a box to box player. It arguably didn’t work very well for them defensively, despite trying to keep a traditional 4-4-2 shape without the ball, as they found it difficult to deny Uruguay space between the lines. Even when it looked predictable what Paz was scheming, no player got tight to stop him.

In return, Ecuador’s midfielders (Rosero the exception) were strong in possession, able to take up good positions to receive the ball and play intelligent passes in forward direction. Aguinaga in particular impressed, also carrying the ball with speed on some occasions.

The quick turnovers exposed weaknesses in Uruguay’s defence. Even giant defender De León had a difficult afternoon, struggling to contain the two Ecuadorian strikers on the ground.

The game gradually became a very stretched affair in the 2nd half, with neither side able to take control of the game.

Ecuador had at times looked disjointed already in the 1st half, but it was surprising to see also Uruguay beginning to lose some of their shape as the 2nd half unfolded. They were defending deep (perhaps aware of Ecuador’s pace), and struggled to keep the team compact when Ecuador were breaking forward.

Despite these signs, Tabárez also made an attacking substitution, sending on Bengoechea (Herrera taken off, Correa new right defender). Losing Correa as a balancing midfielder, Tabárez was willing to gamble to get the win.

Thus, there was a huge amount of space in midfield for both teams to exploit. Tempo was higher and passes often going in a forward direction. Energy and pace became a main weapon in the 2nd half, and Uruguay are not necessarily a better team than Ecuador in this respect. They had been more in control in the 1st half, when tempo was lower.

Ecuador had been threatening on counter-attacks since the end of the 1st half, and finally got their reward only minutes before full-time.

Avilés again doing excellently to receive the ball and shrug off the Uruguay defenders, and spotted substitute Benítez running in behind De León. Benítez easily sprinted past De León, who seemed curiously negligent, and placed the ball behind Zeoli in the Uruguay goal. 1-0 to Ecuador!

Uruguay had been big favourites and although they very not struggling without Francescoli, they were perhaps slightly surprised by Ecuador here, who showed themselves a very plucky side.

Uruguay had been dominating as long as the game was fresh and the tempo slow, but it had become a far more even contest as the game wore on. Perhaps disappointingly, Uruguay gradually lost shape and left themselves open to quick turnovers.