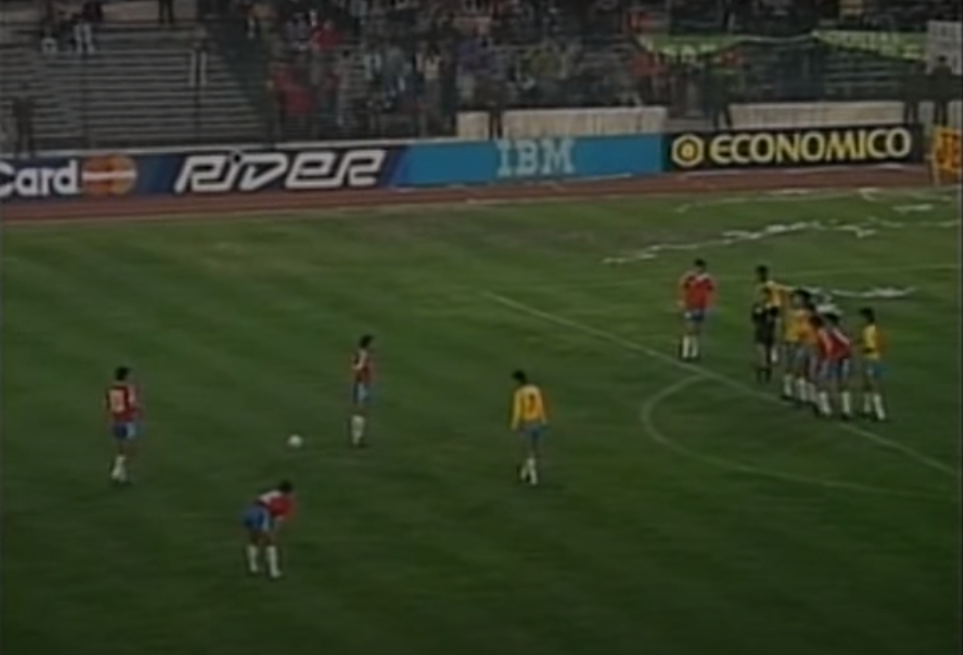 Manager Orlando Enrique Aravena Vergara, aged 46 by the time the qualification started, was into his third year as the Chilean national team boss. He had led them to a wonderful runners-up finish in the 1987 Copa América during his first year, but in the continental tournament which had just finished as the qualification was about to begin, they had failed to get beyond the group stage. That must surely have been a disappointment, though with Brazil being in their qualification group, and with only the winners going through, expectancy must have been kept at a moderate level.

In the two years which had passed from Chile’s silver medals in Argentina in ’87 through to the recent edition in Brazil, just nine from 20 players had been retained in the squad. Whilst just two players had been foreign based in 1987, the number had risen to eight two years later. Could that partly have explained their failure?

Chile had accepted an invitation across to the UK to feature in the 1989 edition of ‘Rous Cup’, an annual tournament which was in its sixth year already. They had played both England and Scotland, as well as met Northern Ireland in a friendly between those two fixtures. A 0-0 draw at Wembley in a defensive display had been a pleasing outcome, whilst they’d suffered a 2-0 blow at the hands of the Scottish. During the week which they’d been in the United Kingdom, they had also defeated the Northern Irish by the only goal of the game courtesy of a goal from stout defender Fernando Astengo.

Upon leaving Great Britain, Chile had also stopped by Egypt upon their return home. Their 3 June friendly in Cairo had yielded a 2-0 defeat.

During the Copa América, Chile had lost their first two matches, 1-0 to Argentina and 3-0 to Uruguay, something which had more or less sealed their exit already. They had redeemed themselves somewhat through winning both of their outstanding fixtures, trouncing Bolivia 5-0 and then beating a decent Ecuador outfit 2-1. A total of six players had got their names on the scoresheet.

Well aware that stopping the Brazilians in their tracks would take some doing, Chile must have had fairly moderate expectations ahead of the qualification. Looking at the fixture list, they would need to win their first three, and then hope that they could topple Brazil on goal difference in order to progress, taking into the equation a loss in Rio de Janeiro. That would mean a first World Cup participation since 1982.

06.07.1989: Uruguay 3-0 Chile (Estádio Serra Dourada, Goiânia)
Line-up: Rojas (c) – Reyes, L Contreras (Vera 70), Gonzáles, Puebla – Olmos, Hisis, Pizarro – Hurtado, Letelier, Covarrubias. Unused subs: Wirth, Carrasco, Ramírez, Tudor
Only highlights are available from this second successive Chile reverse in the opening group stage. They met again with Uruguay, whom they had encountered in that ill-fated 1987 final, when three players had been red-carded and were given two-match bans from the tournament, taking them with them to this edition. To the Chileans, given this was only their second fixture, it meant that libero Fernando Astengo remained suspended, while the opposition, having tackled two matches already, saw the return of key performers Perdomo and Francescoli. After the loss to Argentina four days earlier, Chile needed a result, and a draw would set them well up ahead of their remaining two fixtures. As it were, though, they were never really in the hunt, being a man and a goal down at the interval, with striker Letelier sent off before half an hour of play, and then offering the Uruguayans a second from substitute Vera’s sloppy pass inside his own half. There were to changes to their starting eleven, with forwards Letelier and Hurtado coming into the mix, giving this a distinct feel of a 4-3-3 formation. We emphasize that this is guess-work.

08.07.1989: Chile 5-0 Bolivia (Estádio Serra Dourada, Goiânia)
Goals: Olmos, Ramírez, Astengo, Pizarro (pen), Reyes
Line-up (4-3-3): Rojas (c) (Cornez h-t) – Reyes, Astengo, Gonzáles, Puebla – Olmos, Hisis, Pizarro – Ramírez, Hurtado (Vera 61), Covarrubias. Unused subs: Contreras, Carrasco, Tudor
This time around, though, we’re confident that the Chilean formation is a 4-3-3, thanks to the footage of the entire game being available. The Chileans have back from suspension Fernando Astengo, and he had replaced Contreras alongside Gonzáles at the heart of the defence, while Ramírez came into the right hand side of their front three, and provided plenty of enthusiasm and pace along his flank. The half-time scoreline was 2-0, thanks to two early goals from Olmos and Ramírez, where they exploited some unattentative defending by the Bolivians, with both players running through and finishing from inside the penalty area. At times, the Chileans sliced through the opposing midfield like a knife in warm butter, and Rojas and the defence were generally submitted to single-handed efforts from the Bolivian forwards, from whom there was little collective input. Chile hadn’t looked particularly good, but they were still decent value for that half-time lead. Coming back on to the pitch for the start of the second half, captain Rojas had been replaced by equally experienced custodian Cornez, with Astengo taking over the armband. The influental defender crowned his comeback with a powerfully headed finish for 3-0, as he rose above the ‘keeper from Ramírez’ right wing cross. Bolivia enjoyed spells of possession, though Chile weren’t easily penetrated, and Astengo, in particular, was solid defensively. Olmos orchestrated from midfield, and Ramírez was a constant torn along the right. Vera was brought on for the disappointing Hurtado, and showed some typically nice touches, while it was Ramírez’ inginuity which won a penalty for Pizarro to slot home. Cornez only had a single save to make, which was from Peña late, and shortly after Reyes added the fifth with a low shot from outside the area. A total thrashing, but it was really more about Bolivia being woeful than Chile being extraordinarily exhilarating. With this win, though, the Chileans still had an outside chance of making it through to the second and final group stage.

10.07.1989: Chile 2-1 Ecuador (Estádio Serra Dourada, Goiânia)
Goals: Olmos, Letelier
Line-up: Cornez – Reyes, Astengo (c), Gonzáles, Puebla – Olmos (Vera 62), Hisis, Pizarro – Ramírez, Letelier, Hurtado (Covarrubias 72). Unused subs: Wirth, Contreras, Tudor
Despite losing their opening two Copa América fixtures, Chile, thanks to the size of their win against Bolivia, were still in the hunt for a place in the final group stage until this their concluding first group stage tie. They needed a win by at least three goals in order to overtake Uruguay in second spot. Their opponents, on the other hand, needed just a draw to progress. These were interesting permutations ahead of the 7.30pm Monday night kick-off in Goiânia. Rojas, who had been replaced at half-time against Bolivia remained out, something which saw libero Astengo continue with the captain’s armband after taking over these duties halfway through their previous game. Letelier, back from suspension, won back his place in the team at the expense of winger Covarrubias. That apart, they remained unchanged. We are left with about 26 minutes of second half footage from this fixture. Chile had moved in front late in the first half thanks to a splendid Olmos header from Puebla’s excellently worked left wing cross. The Chilean midfield man had outjumped goalkeeper Morales. In the second half, Ecuador were desperately searching for an equalizer which would’ve taken them through, but despite a host of opportunities, it was Chile instead who got the next goal courtesy of a Letelier header, again following a Puebla left wing cross. This was with just a couple of minutes left on the clock, and another goal would indeed have taken Chile through. However, they conceded straight away, and set up what was probably a frantic finale with Ecuador again hoping to level the scores. Vera had replaced goalscorer Olmos on the hour, while Covarrubias had come on for Hurtado with 20 minutes to go. Chile saw the game out and won 2-1, but the only thing they had achieved was to assist Uruguay through. Both they and Ecuador were out.