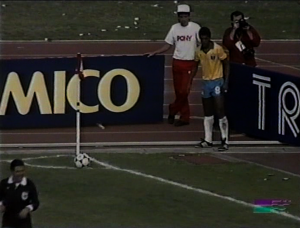 Sebastião Lazaroni, 38 years old by the start of the qualification, had been appointed earlier in the year as Brazil’s new coach. He had a much more pragmatic outlook on footballing tactics than his recent World Cup predecessors, and perhaps was this the way forward now that the top European nations seemed so strong both tactically and physically? Artistically, Brazil were still right up there.

The Brazilians entered the World Cup qualification on a high, having just arrived from a home soil Copa América triumph, their first continental championship title for 40 (!) long years. They had conceded just a solitary goal right throughout the tournament, and they had a front two with Romário and Bebeto looking ever so dangerous. The latter had finished the tournament as top goalscorer with six goals to his name.

However, a 5-3-2 formation with a libero at the heart of their defence; it was hardly classic Brazilian, was it. Lazaroni, despite the Copa América title, had his critics. “What use is there in winning if you can’t get enormous pleasure from watching the team play?” That seemed to be some of the thinking which was found throughout the nation, and which was a view the manager would have to tackle. Attacking principles had such long traditions in Brazil.

Half of their 22 man strong squad in the Copa had been based at home, half in Europe. Altogether, they were a comparatively young squad with no supposed key player (from that squad) aged older than 27 (Galvão/Alemão, though the latter had only been a bit-part player). Could it even be so that 1990 came too soon for this Brazilian generation?

Two weeks to the day after the Copa América title had been secured, it was time for the first qualifier. They had some further talent to call upon which had not taken part in the continental tournament, and both strong full-back Jorginho and experienced striker Careca looked to be excellent additions to the already strong-looking squad.

(Brazil at the 1988 Olympic football tournament)

Tournament of Denmark
16.06.1989: Sweden 2-1 Brazil
Goal: Cristóvão
Line-up (4-5-1): Acácio – Paolo Roberto, André Cruz, Ricardo Gomes (c), Branco – Valdo, Silas (Bismarck 73), Bernardo, Edu (Geovani h-t), Careca II (Gérson 69) – Charles (Cristóvão h-t)
Big central defender Mozer was supposed to feature for his country during this three-match European tour, but he was about to strike a deal with Olympique Marseille, moving on from Benfica, and so he didn’t join with the team after all.