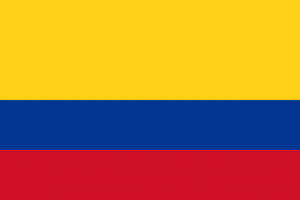 Colombia were coming into the 1990 World Cup qualification as an emerging force to be reckoned with in South America. Having performed modestly in most recent qualifications and never really come close to qualifying, there were clear signs over the last couple of years indicating that this team had improved vastly and become a real contender for a place in the World Cup.

The man deservedly credited for this turn of fortunes, was manager Francisco “Paco” Maturana (1987 – ). A dentist by profession, Maturana had brought new ideas to the national team and in a short time managed to develop a new style for La Tricolor. His philosophy was that of a distinctly possession-based game, focussing on short passing and keeping the ball within the team, that evidently suited well to his current crop of players and enchanted the home audiences. To all luck, Maturana also had available a playmaker who proved to be the perfect fit to this possession-based football, Carlos Valderrama (Montpellier). The main idea was to keep the ball within the team, and to take risks to retrieve it as soon as they lost it. In addition, Maturana introduced zonal marking and instructed his men to play with a high defensive line. Shaping the team after such ideas, Maturana also built his team around players from mainly one club, Atlético Nacional, which also helped building a strong, cohesive team unit. It should of course be added that Maturana doubled up as manager at both club and national team levels.

Maturana’s reign had almost brought instant success, leading Colombia to 3rd place in the 1987 Copa America. They had bowed out in the group stage of the most recent edition of the cup played during summer of 1989, but were again able to compete with the best. Whereas nations like Peru, Chile and Paraguay had qualified for recent World Cups in 1982 and 1986, Colombia had not qualified since 1962, and in recent editions been far behind both the best and the second-best teams in South America. It was apparent to everyone, however, that this was a team that had improved much lately under Maturana and whose success was increasingly growing.

03.07.1989: Colombia 4-2 Venezuela (Estádio Fonte Nova, Salvador, Brazil)
Goals: Higuita (pen), Iguarán 2, de Ávila
Line-up: Higuita – Wilson Pérez, Perea, Escobar, Hoyos – Álvarez, Gabriel Gómez – Redín (García 60), Valderrama (c) – Angulo (de Ávila 60), Iguarán. Unused subs: Niño, Gildardo Gómez, Tréllez
Fresh from Atlético Nacional of Medellín’s continental club championship triumph (they had won the Copa Libertadores final at the end of May), the national team embarked on their Copa América campaign with an opening day win against lowly Venezuela. They had needed a first half penalty conversion from controversial goalkeeper René Higuita to open the scoring, and would add another shortly after the restart. The Venezuelans had Maldonado in their ranks, a player who would exit the tournament with no less than four goals to his name, and he was the one who pulled a goal back, only for de Ávila to net his first and the team’s third. Iguarán added a fourth 15 minutes from time, only for the Colombians to see Maldonado notch his second with a low shot past Higuita for the final goal of the game.

05.07.1989: Paraguay 1-0 Colombia (Estádio Fonte Nova, Salvador)
Line-up (4-2-2-2): Higuita – Wilson Pérez, Perea, Escobar, Villa – Álvarez, Gabriel Gómez, Redín, Valderrama (c) – Tréllez (de Ávila 63), Iguarán (Angulo 71). Unused subs: Niño, García, Cabrera
After overcoming Venezuela in their opening outing, Colombia supremo Maturana opted to make to changes to his starting line-up for the clash with Paraguay. While he lingered with the 4-2-2-2 formation, he dropped left-back Hoyos for Villa, while 21 year old Tréllez came in to partner Iguarán up top, despite de Ávila having scored when he’d come on two days earlier. The Colombians were slow in their build-up, not aided by the pitiful state of the pitch, and it wasn’t a surface suited for interplay in the centre of the park. They had a fine effort around the quarter of an hour mark, when Iguarán drew a save low down from Fernández following a 25 yard drive. Their more direct opponents were looking to get in behind the Colombian full-backs, and Mendoza down their left had troubled Wilson Pérez somewhat in the opening 45 minutes, eventually laying the ball back for Ferreira to smash it against the bar just before the half-time break. In the second half, Colombia soon found themselves a goal down, but despite this, they failed to display an improved level of urgency. Maturana would eventually bring on a couple of forwards, leaving them in 4-3-3 for the final stage, but even their plan B failed to produce much in terms of danger in front of the Paraguayan goal. Now Colombia will need a result against the hosts in order to stand a chance of making progress beyond the first group stage.

07.07.1989: Brazil 0-0 Colombia (Estádio Fonte Nova, Salvador)
Line-up (4-2-2-2): Higuita – Wilson Pérez, Perea, Escobar, Hoyos – Álvarez, Gabriel Gómez – Redín, Valderrama (c) – Hernández (Angulo 71), Iguarán (Cabrera 81). Unused subs: Niño, de Ávila, Tréllez
After that loss against Paraguay last time out, the Colombians now needed to win against Brazil in order to position themselves for progress from the first phase. Two changes again, as Villa was left out for Hoyos, while Iguarán’s colleague at club level with Millonarios, Hernández, came in for Tréllez to feature as a wide left forward. Maturana’s plan must have been one of containment, as they never abandoned their defensive first half stance. Again on the terrible Fonte Nova pitch, cute football along the deck, and certainly around the centre, was an impossibility, but the Colombians had few problems to blank out the hosts, who did enjoy a much greater share of first half possession, but who could do little with it. There was not a lot of pace to the game, and Brazil were looking a lot like the team short in ideas from their previous game. It would have suited Colombia very well, although they themselves would need to look for possibilities to go on the attack to a greater extent the longer the game went on. The second half did for quite some time mirror the first, with both teams remaining cautious and wary, and with a bout of heavy rain and gales, conditions hardly inspired either side. The ineffective Hernández was replaced by the bustling Angulo, who lent a fine impression during the time which he got, and he would twice cut into the area and fire low into the arms of Taffarel as the Colombians went in search of a precious, late goal. The game had opened up somewhat in the final 20 minutes, though not to the extent that there was endless goalmouth action. Cabrera then replaced Iguarán with ten minutes remaining, as the striker had taken a knock, so the visitors’ attack force looked distinctly different as they chased that elusive goal. Right-back Pérez’ 35 yard daisy cutter needed to be pushed away for a left wing corner by Taffarel, but other than that, Colombia couldn’t threaten him further. A win for both sides on the final day of first phase action would now see Brazil through along with Paraguay.

09.07.1989: Colombia 1-1 Peru (Estádio Arruda, Recife)
Goal: Iguarán
Line-up (4-2-2-2): Higuita – Wilson Pérez, Perea, Escobar, Hoyos – Álvarez, Gabriel Gómez, Redín (García 38), Valderrama (c) – Angulo, Iguarán (de Ávila h-t). Unused subs: Niño, Cabrera, Tréllez
In the wake of that draw against the hosts, Colombia now needed to win against Peru, and then hope that Paraguay could get at least a draw against the Brazilians in the later kick-off. This combined would see them through. They had come out once again in their 4-2-2-2, and at times they had looked tail-heavy. They had also failed to ignite properly, not playing with a lot of tempo in their game, and the Valderrama/Redín duo had been found out. The only change since the Brazil game was Angulo in for Hernández to accompany Iguarán. While Colombia had much the greater share of the possession, they again looked sluggish, and against a Peruvian side with only meagre theory for making it beyond the first group stage, they struggled to create openings. They did go into the lead, though, through Iguarán’s crisp left-footed drive following a corner, but against an opponent which had only threatened in on goal once prior to then, the Colombians allowed Peru to haul themselves level thanks to Hirano’s tidy finish one on one with Higuita. A knock had forced Redín off prior to the equalizer, with Alexis García replacing him to earn his first minutes of this year’s Copa América action. After the break, there were times when Colombia upped the ante, but despite more urgency about their play, they could not really break down the persistant Peruvian backline, in which Requena repelled well. The nippy de Ávila had replaced Iguarán at half-time, and did have a lively first 20 minutes, while García twice tested his shooting boots without causing much harm, although he did pull a save from Purizaga. Angulo had plenty of presence and also movement up top, but he did make some odd tactical decisions, which saw him run into cul-de-sacs. Valderrama had some delicate passes, but altogether failed to excel like one had been expecting. The game petered out in a draw, something which pleased the Brazilian supporters present. Colombia now needed Paraguay to win the game which would start very shortly, or Maturana’s side were out.