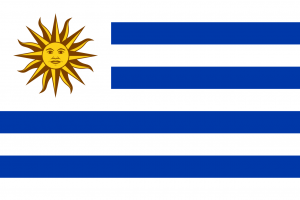 One of the powerhouses of South American football, Uruguay were hoping to prove their worth on the global stage this time around. They had been crowned Copa America champions both in 1983 and 1987, and in the latest edition, held in summer 1989 in Brazil, they had only been denied by the hosts, finishing 2nd in the tournament.

Tabárez
Head coach Óscar Tabárez (1988– ) was aiming to improve on the country’s disappointing performance in the 1986 World Cup, where they had failed to live up to expectations and instead become subject to much criticism on the grounds of unsportmanlike conduct. There were clear signs of a more positive ring about the current team, and led on by the ever more brilliant Enzo Francescoli, who also was new captain of the side, there was hope that Tabárez could not only qualify the team for the World Cup, but also revive its pride in front of a global audience. Tabárez had taken over the reins in September 1988, having most recently led Colombian side Deportivo Cali. He was perhaps more famous, however, for his role in leading Peñarol to the Copa Libertadores title in 1987.

Francescoli – Sosa – Alzamendi
4-3-3 had become the regular formation for Uruguay under Tabárez, regardless of the opponent. The key department of the team was no doubt the attack, usually consisting of Francescoli, Sosa and Alzamendi. The above-mentioned Enzo Francescoli was at the height of his career, and was simply one of the very best trequartistas in world football. Playing in the center of that attacking trio in Tabárez’s 4-3-3, he also played deeper than the other two forwards, often drawing center backs out of position to open up space for his team mates. 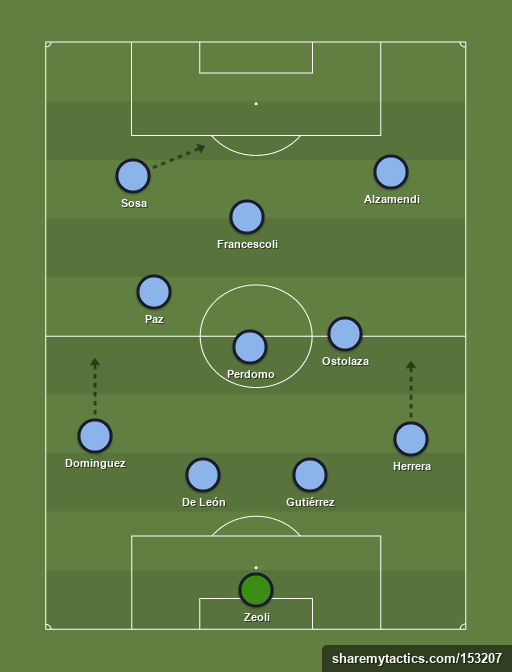 And here lay some of the reason for Uruguay’s success, the brilliant dynamics and fluidness of its attacking movements. The two “wide forwards” Sosa and Alzamendi possessed qualities that complimented those of Francescoli, adding pace. With Francescoli searching the space ahead of the defence and Sosa and Alzemendi trying to run in behind the defenders, Uruguay were often successful in stretching the opponents and making them uncertain how deep they should play. Uruguay rely on a mixed approach where they usually play their way from behind, through the press of the opponent, although it happens that they play the ball into space behind the opponent’s defensive line, for Alzamendi and Sosa to run onto. Alzamendi tended to play in a wide right position, while Ruben Sosa more often drifted inside from the left. While Francescoli was the natural star of the team, Sosa also added some exceptional qualities with his explosive pace and thunderous, often unpredictable shots.

Midfield trio
In comparison, the three midfielders were more functional, and understandably so given the attacking licences given to their front trio. But also here Tabárez could draw on the talents of at least one top player, Rubén Paz, the 1988 Player of the Year in South America. Paz is no doubt the best passer in Uruguay’s midfield, and almost raises to the role as a “second playmaker” in the shadow of Francescoli. José Perdomo (who was captain when Uruguay won the 1987 Copa America) is the holding midfielder, and is at his best when covering zones and putting in feisty tackles. Beside these two, Tabárez has plenty of options for the third spot, but tends to opt for Santiago Ostolaza, who adds plenty of physical presence with his 1,90 m. There are decent alternatives, however, in the shape of Bengoechea and Correa.

Consistent back four
At the back, Uruguay could rely on a solid defensive unit, whose mutual understanding certainly only was growing thanks to the consistency of Tabárez’ team selections. In all likelihood, Tabárez would continue with a back four consisting of Herrera, de León, Gutiérrez (or Reverez) and Domínguez, who had performed so admirably in the Copa America. The defence tended to sit rather deep, and was helped by a disciplined and well-structured midfield in stifling the opposition. Uruguay tend however to be committed to attack and send men forward, and playing 4-3-3 there could be situations where they are vulnerable in being hit on the counter. This vulnerability of course also explains Tabárez’ need for having hard-working players in his midfield.